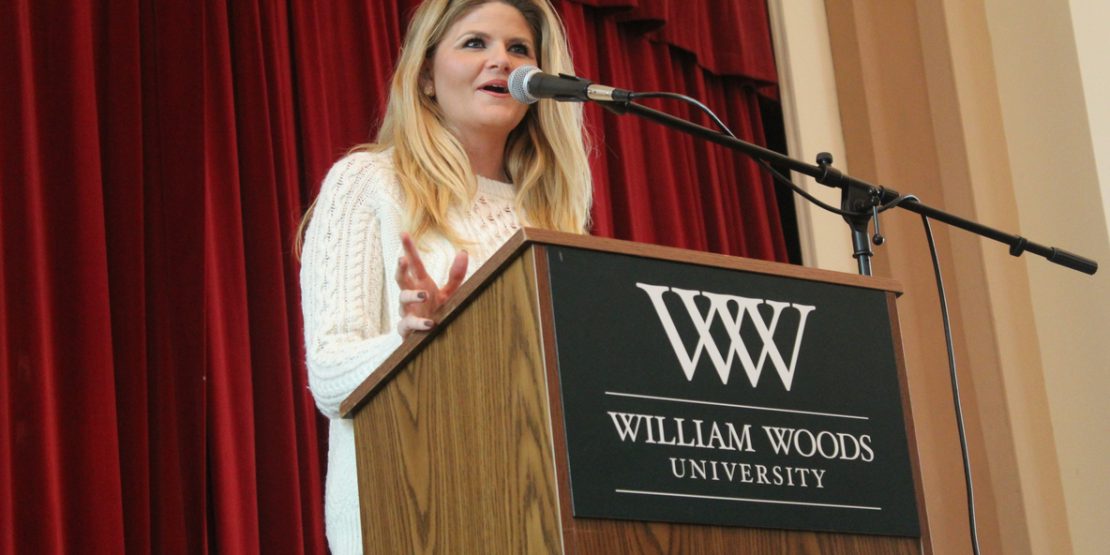 When Kristina Baum graduated from William Woods University in 2004, her dream for her professional career was set – to one day work at the White House. After serving internships with two members of the U.S. House of Representatives and working in communications positions with the U.S. Senate, U.S. House and Chevron Phillips Chemical Company, Baum realized her dream in September 2019 when she became Communications Director for the White House Office of Science and Technology Policy (OSTP).

But it was not without significant obstacles along the way. She was diagnosed with cancer on three separate occasions, an ordeal that was chronicled in both Runner’s World magazine and the 2019 William Woods Alumni magazine.

On Saturday February 1, Baum returned to William Woods to serve as the keynote speaker at the annual Omicron Delta Kappa (ODK) Leadership Conference, where the avid runner spoke about her career, her marathon racing, and having to put her running shoes down multiple times due to her diagnosis.

“My career really just snowballed to where I am today,” said Baum. “I just started working in the White House last September after really working hard to get where I am now. I think it takes a lot of grit to do that, and luckily I had a lot of help and support along the way.”

Baum mentioned her professional network as great support, plus previous professors, mentors, coworkers, as well as family. This support system was there for her through her diagnoses.

“One thing I have learned is that the ‘why’ is really important,” she said. “Whether it’s your career or running, when you hit a dark spot, you need to remember why you have the goal you do and why you keep wanting to go forward. I don’t want cancer to win and cancer wins if it robs me of my goals.”

“The way you live your life is the way you will beat the challenges,” Baum added. “You get experience with stretching yourself to get stronger and is needed for what is ahead for you.”

She also reminded William Woods students not to take this stage of their life for granted.

“I wanted to make a difference back when I was on campus and to leave the campus better than when I arrived,” Baum said. “The courses I took on campus taught me to think for myself. Do not miss the valuable education you are receiving at WWU.”

“A career goal is something you want to hold loosely. It is like if you pick up a handful of sand, you will hold more if you hold it loosely than if you try to squeeze it tightly,” she said. “For me, my identity is so much more than my career, so it helped me be okay when I faced challenges and wasn’t sure if I would reach that goal.”

As Director of Communications for OSTP at the White House, Baum serves as the overseer of all communications functions for the office, which provides the President and others within the Executive Office of the President with advice on scientific, engineering and technological aspects of the economy, national security, health, foreign relations, the environment among other topics. It is a position that is every bit as challenging as being in the epicenter of executive communications in Washington, D.C. can be.

But having beat cancer three times, and back training for marathons to boot, Baum’s determination and resilience have never been stronger because she has always known what she wanted.

“When you put on your running shoes, you have to think of why you want to even run in the first place.” she said.