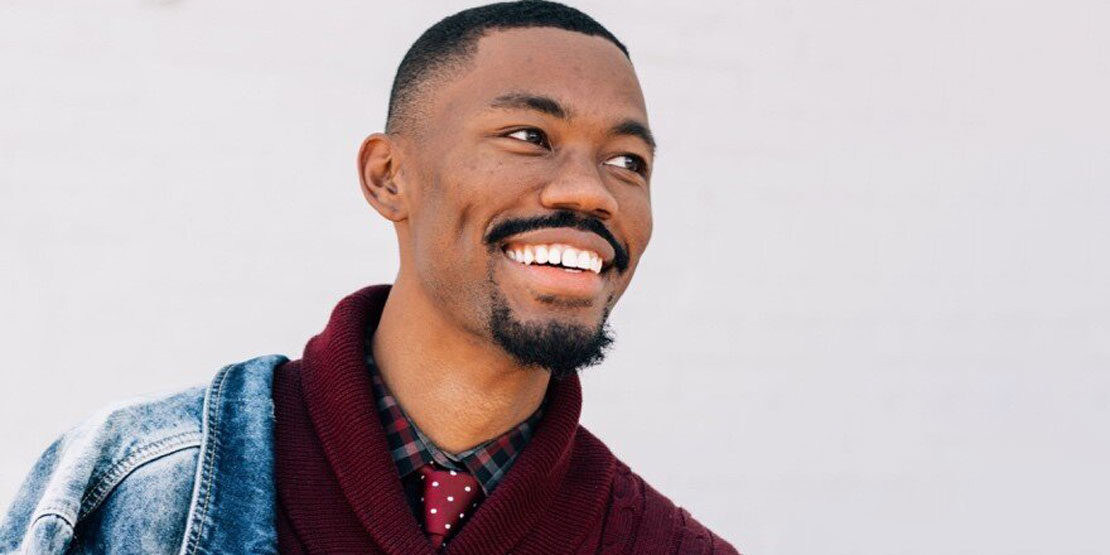 “Playing sports is great, an amazing experience. But it’s an experience with an expiration date.”

And with that, Jonathan Jones began his pitch to a gathering of William Woods student-athletes at McNutt Auditorium on Monday, January 24, one of two sessions the up-and-coming motivation speaker and podcaster held during his visit to WWU. Jones has been traveling the country speaking to collegiate student-athletes for the past several years, focusing on his passion: helping student-athletes market themselves to prepare for life after collegiate athletics.

That message found a receptive audience on Monday, with athletes representing every William Woods team.

“I realized when my time as a collegiate student-athlete was coming to a close that I wanted to help others in my position, to succeed in life beyond earning a college degree,” Jones said in his interactive presentation. “Because all of you should know, or be thinking about – how do I invest in myself? How do I move on from athletics, and succeed in the real world?”

Jones’ mission has been to meet students where they are, help them uncover their passions and arm them with applicable tools to achieve individual success. Before coming to William Woods, he has brought his message of empowering individuals to use their gifts to fulfill their life’s purpose, to student-athletes at such universities as the University of Texas at Austin, Baylor University, the University of Tulsa, Southern A&M University and the University of Louisiana-Monroe.

“The Association of Student-Athletes wanted to help our student-athletes in all aspects of their life and give them tools that are helpful and impactful in their life after athletics,” said WWU Association of Student Athletes President Abby Prather-Turner. “We decided to bring Jonathan on campus because he offered something unique to a truly unique group of students on campus. As student-athletes we are often told we have a unique set of skills that can be used in the real world, but often do not know how to use them. We wanted to bring someone to campus that has shared similar experiences to the student-athlete population and can show us how we can apply these skills in the real world, and Jonathan was the perfect fit.”

Jones recounted his own personal story to WWU student-athletes in his presentation, about how he had his own collegiate basketball career at the University of Texas-Tyler cut short due to injury. Frustrated and working at a sales job some time later, a supervisor told him his poor attitude was holding him back. So to face that problem, he changed his attitude and created a “No Complain” campaign. Eventually, his campaign grew on social media and became a movement, with its own hashtag. And just like that, he learned an important lesson.

“The best way to market yourself,” Jones said, “was to find something you are passionate about and start a movement.”

From there, Jones realized that people who start successful movements, or create successful products or services, are people who identified a problem and decided to solve it. He knew from his own experience that some ex-college athletes sometimes struggle trying to move on and be successful in the real world after the uniforms have been put away for good. So, he began his own podcast about it. And soon found himself telling his story and motivating college athletes around the country as well.

“Playing sports uniquely qualifies you to market yourself in the real world,” he added. “All the qualities that made you a successful athlete – maybe it’s being disciplined, or showing up early, or never giving up, etc. – are all qualities that are in demand in the professional world. These are all tools for you to use in marketing yourself.”

It all boils down, Jones told his WWU audience, to three crucial practices that all student-athletes who want to be successful after college should live by:

Choose Your Mission. Identify what you are most passionate about, and get to know successful people who are currently doing it. For Jones, it was helping collegiate student-athletes market themselves and succeed in the post-college world.

Be A Social Butterfly. Be curious about others, ask them about their professions and lives. Network, and spend time with successful people.

Build Your Movement. Find a problem to solve, and go all-in on a solution. Promote your solutions on social media, or start a podcast.

“You have the power to shape your own future, and blaze your own path,” Jones said. “You just have to know how to put yourself out there and go after it, even if it’s out of your comfort zone.”

“One of Jonathan Jones’ quotes that really stood out to me was to “get uncomfortable,” said Jessica Keilholz ’25, a member of the WWU Women’s Softball team. “The first thing I thought of was how uncomfortable I was last semester, coming in as a freshman doing things I was not familiar with such as living away from home and being independent. This semester I strive to make myself uncomfortable to help me grow as an individual, and his advice was exactly what I needed.”