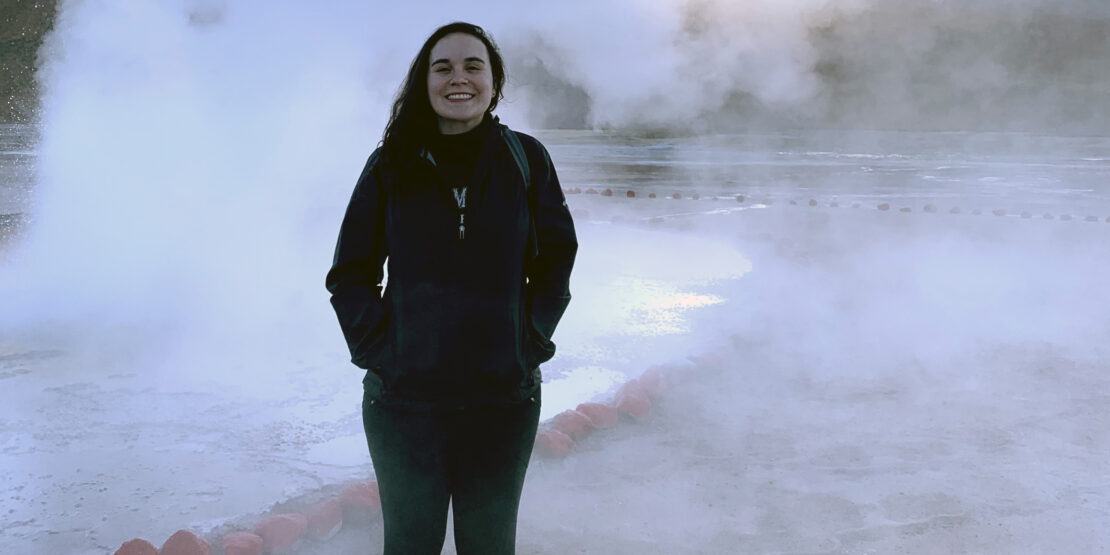 If you are looking for an alumnus that epitomizes the William Woods University goal of creating global citizens of the world, look no further than Tiffany Rhame ‘17.

In the four years since graduating from The Woods with a degree in Business Administration with a Spanish minor, Rhame has already had the opportunity to travel overseas as she pursues her dream of working in the global corporate world. She was recently accepted into the University College Dublin (Ireland) Michael Smurfit Graduate Business School to study International Business. She had the fascinating opportunity to teach English for two semesters in Santiago, Chile after receiving her Teach English as a Foreign Language (TEFL) certification. She also experienced trips to New Zealand, Australia and Ecuador as part of the Woods Around The World program at William Woods.

So what in the world prompted the Fayetteville, Arkansas native to embark upon a career that promises to have her literally spanning the globe in the coming years?

“I think traveling to new and foreign places is one of the most exciting things in the world,” Rhame said. “You realize just how small you really are in this big universe and I find that humbling. It’s also a crazy feeling to connect with so many different people from around the world and be able to learn about different cultures and new ways of doing things.”

“I think everyone should do some traveling abroad during their lifetime – it can be life changing,” she added.

Much like how Rhame’s own life changed the day she arrived in another part of the world – Fulton, Missouri, home of William Woods.

It was the opportunity to play intercollegiate basketball that first drew Rhame to The Woods. Some of her favorite memories of her time at WWU revolved around practices and games with her Owls teammates, as well as spending time with her sisters in the Alpha Chi Omega sorority. But is was professor Brenda Popp that convinced her that the Business Administration program at WWU was what she needed to be studying in terms of her future career. And it was that lifelong dream of traveling that led her to begin pursuing her ultimate professional goal of International Business while still at William Woods.

“I really wanted to study International Business as an undergrad, so I chose Business Administration at William Woods with a focus on marketing, and compensated for the international part by pursuing a minor in Spanish,” she said. “This allowed me to take classes in Latin American and Spanish history, and interact with (Associate Professor of Spanish) Dr. Hannah Bolados, who was instrumental.”

“Dr. Bolados had us do a speaking video with an international student,” Rhame continued, “where we had to converse with them in Spanish, ask questions and just have a normal conversation. Overall, William Woods had a high population of international students, so interacting with them, having classes with them, and working on group projects with them are also what prepared me to go into International Business while I was at WWU.”

Upon graduation from The Woods in 2017, Rhame knew that improving her Spanish would be pivotal to her prospects in International Business. She also remembered that Dr. Bolados’ husband was a native of Chile. So after obtaining her TEFL certification through the University of Arkansas in her hometown, she was heading south to the South American nation for a year of adventure.

A year of living (somewhat) dangerously

Rhame spent two semesters teaching English at Douc, which would be similar to a technical or community college in the U.S., in the capitol city of Santiago. She loved teaching the age group she taught and being in a foreign country, which nevertheless brought challenges and even a touch of danger.

“There were many challenges, such as dealing with the language barrier and even having to navigate life during a social uprising which ended up happening during my second semester there,” she said. “We had to move classes online because it was no longer safe to commute to campus for the students and teachers.”

Rhame lived right in the center of Santiago, a huge city of more than five million people, so she was just a two-minute walk away from protests, riots and fires that were frequent at the time. She even experienced being tear-gassed numerous times.

“I know that might sound scary, but I’m really glad that I was there to experience all of that,” she said. “It was very eye-opening and really provided me with a lot of respect for what life can be like for those living in South America.”

But there were, of course, more joyful memories for Rhame. The friends she made in Chile or during travels to other parts of South America, for example. Or celebrating Fiesta Patrias, a weeklong celebration each September commemorating Chile’s independence from Spain, which included carnivals and fairs with food, drinks, live music and traditional dances everywhere. Overall, it was an experience she would not have missed for, well, the world.

“I felt like I really got to know Chile better and learn more about their traditions and culture,” she said.

Having traveled as a tourist and worked as a teacher, next up for Rhame will be studying abroad as she embarks upon the graduate program in International Business at the University College in Dublin. She is ready for the new experience, which will begin this fall, the next step in her journey toward her dream career.

“I think working and studying abroad are two different things and I am excited to see how studying abroad will differ from working,” she said. “While Ireland is an English-speaking country, I imagine there are still going to be a lot of big differences between their culture and ours in the U.S. and I cannot wait to experience them and find out what they are.”

And as for others who are interested in going overseas, or going into International Business?

“Try to do some traveling before you actually commit to going overseas for a long period of time, because living abroad is a completely different experience and can be a culture shock for some,” she said. “However, if it is something you want to do, I wholeheartedly recommend it. You will grow not only as an individual but as a citizen of the world. You will quickly realize how adaptable you are and your problem-solving skills will improve immensely when faced with issues abroad.”

“And if you decide to study International Business, be sure to study a foreign language (or two) and try to reach a good level of fluency,” Rhame continued. “It will really help you in the long run not only in life and traveling but it will make you a better candidate for future jobs, especially abroad.”

Tiffany Rhame’s odyssey around the world has already included experiences in a number cultures far removed from U.S. shores, and is poised to continue as she pursues her lifelong passion. It is a dream that, with some key assistance from William Woods University along the way, she is close to realizing.

William Woods University1 week ago
Thank you to all who have given to the re-imagined President's Giving Society. Whether this is your first time giving, or you have been a contributor for many years, we appreciate your loyalty and commitment. Together we are building a society for the future. Explore the benefits of membership: https://www.williamwoods.edu/alumni_and_giving/giving/presidents_giving_society.html

William Woods University2 weeks ago
Incoming and returning students: There's still time to get your Covid vaccine in preparation for fall. Let's knock out Covid together!