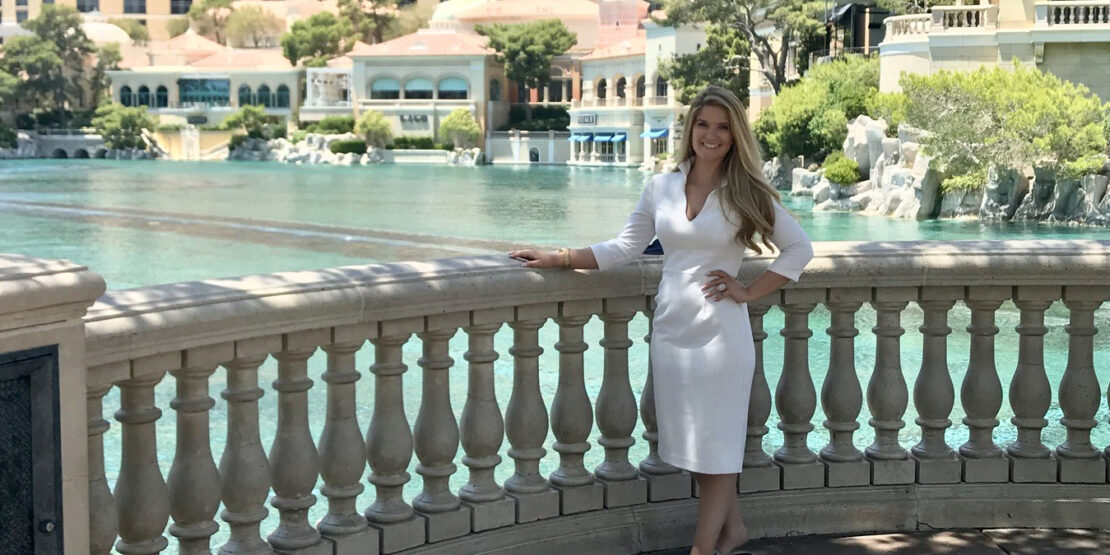 A little over six years ago, Mandi LaRue ’11 did what countless Americans do each year.

She took a gamble in Las Vegas.

But the chance LaRue took had nothing to do with slot machines or card games. Instead, the Fulton, Missouri native decided to take her burgeoning career in Hospitality to the city that is practically the Hospitality capital of the world, and see where the move would take her.

“After college, I moved to St. Louis to begin working in a casino resort there,” LaRue said. “From there, the natural progression in the Hospitality industry was Las Vegas, where MGM Resorts is the leading employer. They have a great culture, amazing experiences and really passionate leaders. I’m so glad I made my way to MGM!”

She is more than just making her way on the big stage of Vegas – she is excelling. Just one decade after graduating from William Woods in 2011, LaRue today serves as Director Organizational Effectiveness focusing on food and beverage and retail strategy for MGM, a massive international brand with 70,000 employees, 40,000 hotel rooms and 450 restaurants and bars worldwide. She is a leader on a very high-profile team, and having the time of her life doing it.

“We get the opportunity to interact with people who are on vacation, enjoying special occasions with family, or just seeking an unforgettable experience – and we get to create those moments for them,” she said. “It is a thrill like nothing else!”

You Can Go Home Again

Long before she furthered her impressive career by leaving for the bright lights of Vegas, LaRue did something else that many a young person does from time to time. She returned ‘home.’

“I actually went to the University of Missouri for my first year of college, but just missed the personal connection and support that seemed to be everywhere in Fulton,” she recalled. “Since I grew up there, I knew a lot about William Woods and some of the people that worked and attended there. I knew my experience would be much more tailored to my needs, and I thought the relationships that I would build there would be long-lasting, which they certainly have been!”

So LaRue transferred to The Woods, where it did not take long for her to realize that she made the right choice for her.

“My very first day at William Woods, I had an Econ class with Professor Ed Easterling, and later that day at lunch in Tucker, he came up to me and asked me how I liked William Woods so far,” she said. “I was in shock! Coming from a large university, there wasn’t a single professor there that would have known my name after having me for an entire semester because the classes were so large. Not only did he remember me from that morning but took a genuine interest in how I was adjusting.”

“I think of that moment often when I am working with new employees and remember how special that made me feel.”

LaRue was heavily involved in campus life at The Woods, participating in President’s Twenty and joining Delta Gamma sorority. Some of her fondest memories include the lifelong friends she made at WWU, including two of her Delta Gamma sisters who will be a part of her wedding this fall.

“I really loved Saturday mornings, when my friends and I would gather in my apartment, make coffee and just laugh and laugh about what we did the Friday night before,” she remembered. “Then, in our PJs, we would walk over to Tucker and hope they had something fried and heavy to eat!”

It was at William Woods that LaRue discovered exactly what she wanted to do with her career, thanks to an Entrepreneurship class she took with Dr. David Forster.

“Our big project for the semester was to write a business plan for something we wanted to create,” she said. “I chose a frozen drink bar at the Lake of the Ozarks. At the time, it just seemed like a fun project but being required to do the research, strategize and truly develop a concept from scratch really got my gears turning. It ended up sparking a lifelong passion for the restaurant business. Prior to that I had been a server and bartender, but after that project, I truly knew that I wanted to make Hospitality my career.”

Armed with her Bachelor’s degree in Business Administration from WWU and some great college experiences and memories, LaRue graduated in 2011 and joined life’s biggest game of chance – her future.

After two years working at casino resorts in St. Louis, LaRue made her biggest move when she joined Pinnacle Entertainment in Las Vegas as a corporate food and beverage training manager. She later moved on to MGM, where she was appointed to her present position of Director Organizational Effectiveness in December 2019. In her position, she has the responsibility of analyzing operational needs in the Food and Beverage and Retail areas and designing strategies that maximize both financial success and guest experience for MGM’s properties.

“The decision I get to make every day affect literally thousands of people and venues who are part of MGM,” she said. “Recently, for example, we hosted a Hospitality Fireside Chat with 400 of our leaders from across the country, where we spoke about our industry, the struggles, the joys, and so on. One of our guests was THE Sara Jessica Parker!”

“My career in Vegas has led me to working with world renowned chefs including the previous coach of the USA Olympic Culinary Team as well as the Iron Chef who defeated Morimoto,” she said. “There is just nothing like this industry!”

Of course, such big responsibility comes with tackling some big problems. Like hiring at the present time, for example. There are currently thousands of job openings across MGM’s wide network and not near enough candidates to fill them. And then there was emerging from the COVID-19 pandemic, which crippled the Hospitality industry across the globe.

“It was something that no one could really prepare for or practice,” she said. “COVID shut down all 20 of our resorts and casinos. I remember walking through the Bellagio (a resort, luxury hotel and casino) during the closure and all the lights were off, no music was playing, and not a soul was in sight. It was eerie, to be honest.”

But like the rest of the country, Las Vegas is coming back from the pandemic. Which means LaRue is also back to doing what she loves as before, in a place she now calls home.

“When I first came here, I expected it to be a short experience of 3-5 years,” she says. “I have been here now for almost seven years now, and have no desire to ever leave! It is truly like nothing else, working in Hospitality in a place like Las Vegas. This industry can lead you down so many paths, and you get to meet so many incredible people, many that you will have relationships with for the rest of your life.”