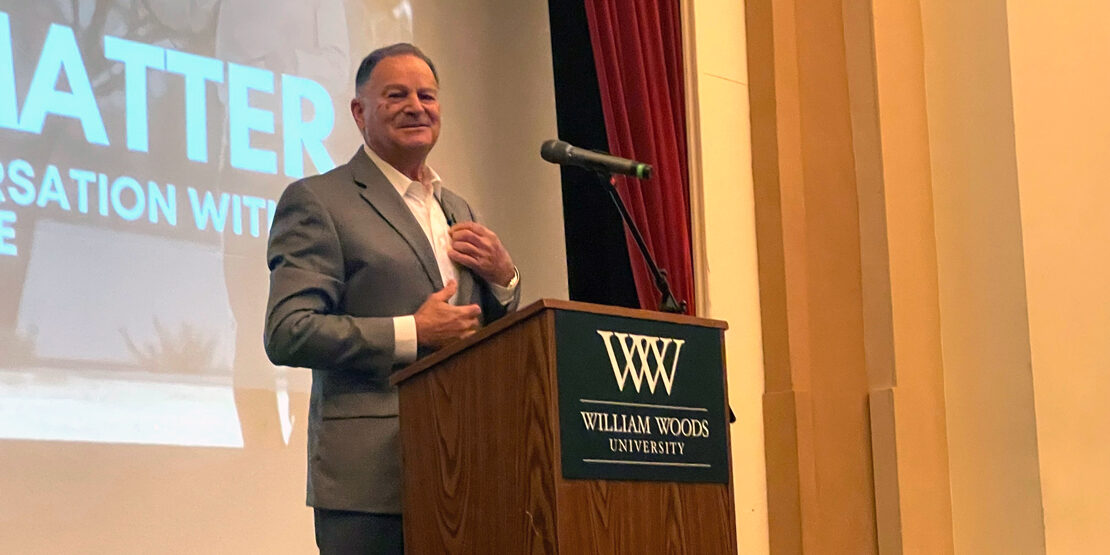 If there is one thing that Jim Hagale knows how to do, it is to succeed in the business world.

The former President and Chief Operating Officer for Bass Prop Shops, Hagale’s marketing and strategic business vision took him from creating his own apparel manufacturing and marketing firm as a young man to the top position at one of the most recognized brands in the outdoor retail industry in his remarkable career.

“I always wanted to show appreciaton for the generations that went before me, who did so much and endured so much to create better opportunities for their children like me,” Hagale said of his Depression-era grandparents and parents. “I always felt I was borrowing my last name until I earned the right to live up to it, with how I succeeded in my life.”

Hagale used how he has been incredibly successful in life through his stellar corporate career as a backdrop to his presentation to William Woods students, entitled “Choices Matter,” on Wednesday January 18 at Kemper Art Gallery, while also finding some time to address his other passion, Arabian Horses.

A native of Springfield, Missouri, Hagale founded Hagale Industries in 1969, beginning an outstanding career in apparel manufacturing and marketing. With just 25 employees, he began producing men’s and women’s apparel while marketing nationally to major branded catalogers and retailers such as Land’s End, L.L. Bean, J. Crew, Nordstrom, Brooks Brothers, Joseph A. Banks and J.C. Penney. He eventually built it up to 3,000 employees and 12 plants, before hitting adversity – when the company went bankrupt and he lost everything at age 55.

But like those of his grandparents’ and parents’ generation, he picked himself up and made the best decision of his life – accepting an offer to consult a small, growing company called Bass Pro Shops.

And Hagale did that, parlaying his part-time consulting position into management at Bass Pro in a period of months. First, he was promoted to Executive Vice President, responsible for merchandising, distribution, finance, human resources, and information technology for the famous brand. Then, he was named President and Chief Operating Officer in 2003, responsible for day-to-day operations of the company. Under his guidance and leadership, Bass Pro expanded its popular destination retail stores in the U.S. and Canada, with Sporting Goods Business Magazine naming Bass Pro the #1 Outdoor Retailer in American for two consecutive years.

“Our lives are an accumulation of the choices we make,” Hagale added, as he recounted turning a negative part of his life into an overwhelming positive. “It is all about personal responsibility, making the right choices and accepting the consequences of those decisions.”

Since retiring from Bass Pro Shops, Hagale has channeled his energies into breeding Arabian Horses, which began about 20 years ago when his young daughters developed an interest in the animals. And to say Hagale has taken to his new passion quickly is an understatement – he is currently the owner of a World Champion American Saddlebred Horse!

In fact, it was Hagale’s passion for horses that brought him together with William Woods. WWU Equestrian legend Gayle Lampe met him on two occasions, including the U.S. National Arabian Horse Show in Tulsa, Okla. (where Hagale’s horse became a national champion) and also the World Championship Saddlebred Horse Show in Louisville, Ky. She later stopped by Hagale’s newly constructed horse barn near Springfield.

“At that point, I fully realized how dedicated he is to the horse business, and, along with other success at Bass Pro and other ventures, knew he would have so much to offer our business and Equestrian students at William Woods,” Lampe recalled. “I asked him to come speak at WWU, in exchange for taking him on a complete tour of all the area Saddlebred barns, and he agreed!

Hagale has had spectacular success in his life, whether it is in his corporate career, raising a family of six children, or in his raising of champion horses. He left the William Woods audience with words he has always lived by, courtesy of the late journalist and pundit Erma Bombeck:

“When I stand before God at the end of my life, I would hope that I would not have a single bit of talent left, and I could say ‘I used everything you gave me.’”

Jim Hagale’s visit to The Woods was sponsored by WWU Vice-President/Chief Advancement Officer Tony Andenoro, and Gayle Lampe, Professor-Emeritus of the William Woods School of Equestrian.

William Woods University3 days ago
It's the inaugural season for Outdoor Life Sports at The Woods, and today Head Coach Taylor Lehman brought her team over the meet with President Moreland in his office. Go Owls!

William Woods University4 days ago
Congratulations to Colette Whelan! We thank you so much for your 20 years of service at WWU.