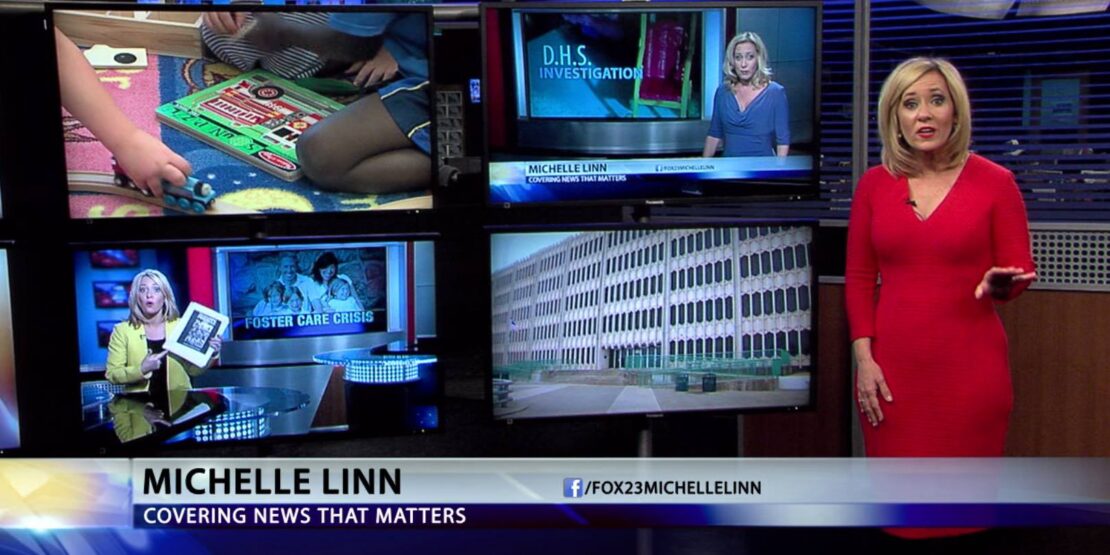 The dream job for Michelle Linn ’96 begins each day when most of the rest of us are, well, dreaming.

Or at least sleeping.

Anchor of FOX23 This Morning and reporter for FOX23 News in Tulsa, Oklahoma since 2011, the St. Louis native begins each day with an alarm wake-up at 1:20 a.m. But she wouldn’t have it any other way, not since she first dreamed as a kid of being on the air delivering the news.

“I grew up watching Joan Lunden on ABC’s ‘Good Morning America,’ and thought she had the coolest job in the world,” Linn says. “I was eight years old when I decided I wanted to do what she did.”

And for nearly the past 25 years, she has done just that – building a sterling career in broadcast journalism while remaining passionate about delivering news, identifying issues in the community and telling stories. It has been a rewarding journey in a demanding industry for Linn, who has also found time to build a wonderful family that consists of four young children with her husband, Mark. A journey that included a pretty significant stop along the way at William Woods University.

College days at The Woods

It was 1992 when Michelle accompanied her twin sister Christi on a visit to William Woods during a prospective weekend, where both fell in love with the campus. Her decision to attend The Woods was also influenced by what the University could do for her in terms of her career choice. Internship opportunities in the Communication program at WWU allowed her to gain experience in the industry at KSDK-TV (St. Louis) and KRCG-TV (Jefferson City) while still a college student. She also took advantage of a dual enrollment program offered at William Woods by completing studies at the Broadcast Center in Clayton, where KMOV-TV anchor Larry Conners taught a class and shared real-world TV news experiences.

Academically and socially, WWU proved to be an excellent fit for Linn.

“I have so many memories of fun times with my friends in Cockrell Hall, and lots of great memories of meals shared at Tucker Dining Hall,” she said. “Chris West and Joe Potter, in the theatre department, were memorable, and then there was the late Ed Easterling’s microeconomics class, which is the toughest class I have ever taken. Outside of classes related to my major, I also loved classes I took in biomedical ethics and sociology.”

But as memorable as her stay was at William Woods, Linn never wavered from her dream of working in television news. Eager to begin her career, she worked diligently and graduated a semester early, in December 1996, with her Bachelor of Fine Arts in Broadcast Communication.

Next up: nearly a quarter century of thriving in television news.

Immediately after graduating from WWU, Michelle began her career as a part-time reporter at KMIZ-TV in Columbia, Missouri, starting out as a part-time reporter. She quickly promoted to morning cut-in anchor, producing and anchoring news updates during Good Morning America, and eventually launched the station’s first-ever hour long morning news show. She served in a variety of roles during her 14 years at KMIZ, including news anchor, reporter, producer, assignment desk editor, promotions manager, and director of public relations.

She also found time to reconnect with William Woods, covering her sister’s graduation in 1997 while in her capacity as a reporter at KMIZ, and later serving as an adjunct instructor in the Broadcast Communication program at WWU from 2001 to 2003.

The variety of positions and experiences she shared in her years at KMIZ were consistent with her advice to young people interested in a career in broadcast journalism.

“It’s important to make connections with people in the industry, to network,” she said. “Always use your resources and get as much hands-on experience as possible, through internships at TV and radio stations, which are incredibly valuable.”

All of which certainly paid off for Linn in 2011, when a bigger television market came calling.

Michelle and her husband expected to remain in Columbia forever and raise their kids there. But when she received an inquiry from the FOX-affiliated station in Tulsa, Oklahoma to anchor and report there, a move to a much larger TV market, it was too good of an opportunity to pass up.

A decade later, Linn has become an institution in Tulsa, co-anchoring the highly popular FOX23 News This Morning from 5-9 a.m., and then going out into the field and reporting on breaking news stories for the rest of the day. That is the schedule that begins with the unforgiving 1:20 a.m. wake up call each day, which is just the first of her daily challenges.

“Even though our morning show is our highest rated newscast, because of the undesirable work hours (3 a.m. – noon), the mornings are often more of a training ground for new reporters and producers,” she said. “Once they get proficient with our news software, learn how to write stories and operate the equipment, they are often moved to another shift. We are constantly training and teaching, so there is a learning curve at the beginning, and that is a challenge.”

Still, nearly 25 years in, Michelle Linn is as engaged about her craft as ever, occasionally sleep-deprived as she may be.

“The very best part is meeting people and sharing their stories,” she says. “I love that no two days are the same. I get to anchor the morning newscast (4:30 – 9 a.m.), then go out and report. I get to cover a lot of consumer investigative stories, which directly impact people. Since 2013, I’ve led our station’s coverage of the St. Jude Dream Home campaign, which allows me to meet local St. Jude patients and their families.”

“I love my job – it is exactly what I always wanted to do.”

It is said that if you love what you do, you will never really “work” a day in your life. It is safe to say then that, 25 years after the determined young woman graduated a semester early from William Woods to get a jump on her broadcasting career, Michelle Linn may have never truly worked a day in her professional life. Which is something we should all be so lucky to say.