Seven dwarfs, a beautiful girl, and an apple. That’s right, the William Woods University theatre curtains are opening for a production of “Snow White”! 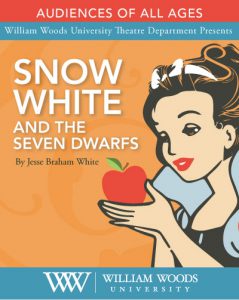 This family-friendly interpretation of Snow White differs from the Disney version that most people know. It’s based on the Grimm Brothers’ tale, but is brought to life in a fun and unique way. Kelley Barr, a freshman and theater education major from Ballwin, MO who plays Snow White, believes that “everyone will recognize this story, but not recognize every part. It will feel very new and different.”

Joe Potter, assistant professor of performing arts and the show’s director, explains why he chose this particular play: “We wanted to do more productions for children, but also because this rendition of the story focuses on every single character, instead of just Snow White — which I really like.”

Although this production is run by William Woods, the local community makes up almost half of the cast list — the largest representation that has been seen in a long time. For instance, the character of Prince Florimond is created by the talents of Logan Garner, a sophomore at Fulton High School. “They spread the word about the show to the community, which turned out quite a crowd at auditions,” says Garner, son of George Garner, a William Woods social work professor. “It’s good because it gives kids the opportunity to learn about college-level theater.”

The performances will take place February 23, 24, and 25 at 7:30 p.m. in Dulany Auditorium at William Woods University, with a matinee Saturday at 2 p.m. The Thursday night performance will be also interpreted for the deaf.

For more information or to purchase tickets, visit www.williamwoods.edu/mainstage or call 573-592-4267.