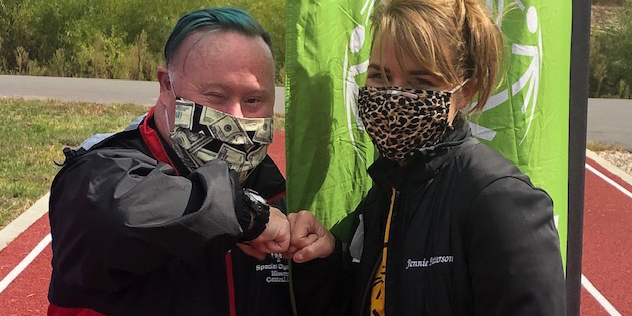 The Summer Olympics might have just concluded in Tokyo, but for William Woods University Professor and School of Equestrian Studies Director Jennie Petterson, the Olympic dream is just beginning.

Petterson has been chosen to compete in the 2022 Special Olympic Games in Orlando, Florida as a Unified Partner with Special Olympian Joey Garrard in the sport of bocce, which will take place June 5-12, 2022. And to make it even more exciting for the long-time Special Olympics supporter and participant, her own 19-year old son Aiden, a collegiate tennis player, will also be representing Team Missouri as a tennis coach.

Earning a spot on the Missouri team at the sport’s premiere national competition is the pinnacle for a life devoted to the Special Olympics cause for Petterson and her family.

“I would challenge anyone to volunteer with Special Olympics and not be impacted,” she said. “It is an amazing organization.”

Petterson’s history with Special Olympics dates to 1998, when she and her husband began volunteering for Special Olympics Idaho. When they came to Missouri after Petterson joined to Equestrian faculty at William Woods, they helped establish the Fulton chapter of Special Olympics in 2005, and have been active volunteers and fans of Fulton’s team ever since. They got their son Aiden involved when he was just four years old, and he began playing as a Unified Partner (when you pair with a Special Olympian to compete in a sport) in sports like tennis and basketball when he was old enough.

“At just 19 years old, Aiden has been a volunteer for 15 years, including competing as a Unified player for eight years and now as a coach for the Missouri tennis delegation,” Petterson said. “He has grown up with Special Olympics as a major part of his life and has given so much of his time and energy to the athletes.”

Petterson first become interested in competing as a Unified Partner in bocce when she watched the sport being played at the 2018 Special Olympics USA Games in Seattle. Knowing Joey Garrard through Special Olympics bowling and basketball, she decided to reach out to him to form a doubles team in bocce.

“Joey is a bowler and that translates pretty well to bocce,” she said. “We have been playing together for almost four years now. Unified sports are a terrific way to be involved with Special Olympics, which gives community members a chance to compete with athletes in a division referred to as ‘unified.’”

Together, Petterson and Garrard won a gold medal at the Missouri state tournament earlier this year, which is a requirement for consideration as an athlete or Unified Partner at the USA Games. After submitting applications this spring, Jennie, Joey and Aiden were all notified in May that they were selected as finalists. They then attended a grueling selection camp June 26-July 1 in Jefferson City, a residential experience that brought athletes, Unified Partners and coaches together from all over Missouri to attempt to secure the limited spots in the sports Missouri had available. From there, the trio all earned coveted spots on the Team Missouri squad, punching their ticket for Orlando in 2022.

In all, Team Missouri will send 97 athletes, 27 coaches/sports managers and eight staff to the 2022 games, representing the more than 16,000 athletes and 2,400 coaches who participate in Special Olympics Missouri. The USA Games will bring more than 5,500 athletes and coaches from all 50 states to compete in 19 sports in Orlando, including three proudly representing Special Olympics Fulton. “It is a tremendous honor for the three of us to be selected from Special Olympics Fulton,” Petterson said. “The motto for the 2022 games is Shine As One, and I cannot think of a better message to send.”