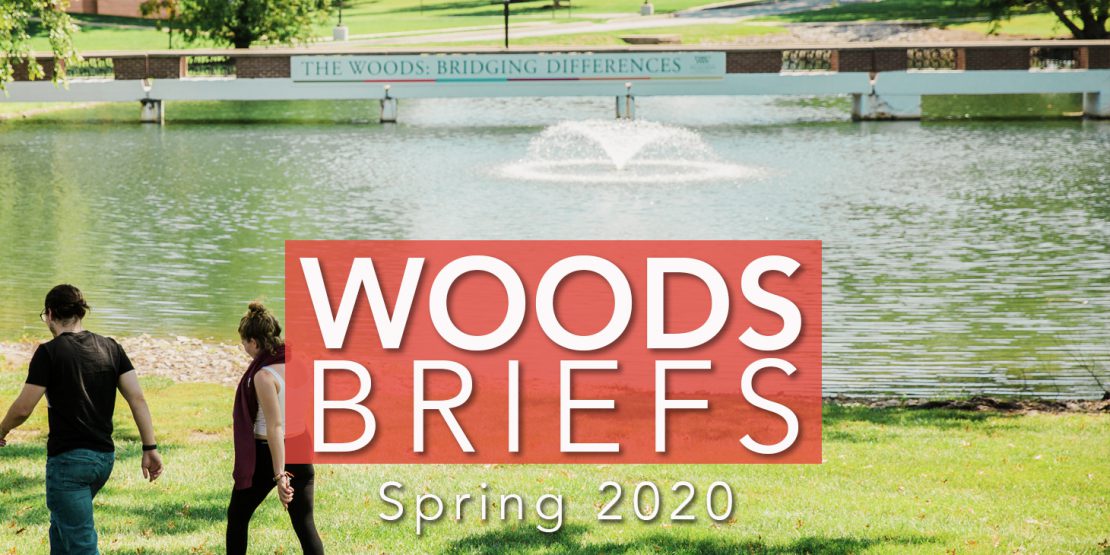 News and notes about William Woods students, faculty, staff, and alumni. Updated continuously throughout the semester.

Timothy Hanrahan, Associate Dean of the Faculty and Associate Professor of Physical Education, wrote “Creating Experiential Learning Opportunities in Any Course,” an article which was featured in the April 6, 2020 issue of the Faculty Focus Daily newspaper.  https://www.facultyfocus.com/articles/teaching-and-learning/experiential-learning-opportunities-in-any-course/?st=FFdaily;s=FF200406;utm_term=FF200406&utm_source=ActiveCampaign&utm_medium=email&utm_content=Creating+Experiential+Learning+Opportunities+in+Any+Course&utm_campaign=FF200406

CPT Brett Kirk, Instructor of Leadership and Military Science, was promoted from First Lieutenant to Captain within the Missouri Army National Guard. CPT Brett Kirk is the OIC for the Show-Me GOLD program at William Woods University.

Elizabeth Wilson, Professor of Social Work, won the Jane Bierdeman-Fike Humanitarian Award presented by the City of Fulton Human Rights Commission for her work with the William Woods University Social Work program. The William Woods Social Work program requires each of its students to complete 500 hours of volunteer service in the Fulton and Callaway County area. The local agencies that have benefited from these volunteer hours include SERVE, CARDV, Fulton State Hospital, North Callaway and Fulton Public Schools, CMCA, Missouri School for the Deaf, and many others

Mona Steffens, Mail Center Supervisor, was one of six nominees for the Jane Bierdeman-Fike Humanitarian Award for bringing the Fellowship of Christian Athletes to many schools in Fulton. Mona also developed a program called the “Fifth Quarter,” which provides a safe and fun place for students to go after home high school football games. Mona has also worked to organize groups of kids to rake leaves for the elderly and she teaches Sunday School.

Allie Tate ’20, Hailey Shepard Hartman ’20 and Daryl Parungao ’19  will all be presenting research in the area of Mental Health/Wellness at the 2020 Southwestern Psychological Association national conference at the University of Texas-Arlington. The conference will be held April 3-5, 2020.

Douglas Webster ’16 says things are going well since receiving his MBA from WWU, including having two beautiful children with his wife.

Lindsey Echele ’16 married her husband, John, in June of 2018. They bought a house and moved from St. Charles, MO to Pacific, MO in April of 2019. After graduation, she was a lesson instructor and event coordinator at Castlewood Stables in Ballwin, MO, and is currently the Program Director and Barn Manager at a non-profit equine-assisted therapy facility in Wildwood, MO called Equine Assisted Therapy (EAT). She is certified through PATH and Spirit Horse International, and has been an instructor at EAT since January 2019. She has one horse; a paint gelding named Jake, as well as a dog named Leroy who is a spaniel mix.

Jennifer Strosnider ’17 graduated from Loyola’s ABSN program in December 2019 and started as an ER Registered Nurse in March. She also is engaged and originally planned for a big wedding in June of 2010, but decided to postpone the wedding until June of 2021.

Rita (Russell) Adams ’75 reports that her husband Stan Adams’ Vietnam memoir, “Mokane to Mole City,” a harrowing account of his tour of Vietnam as an Army infantry man in 1968-1969, has been a best seller for Vietnam history on Amazon. Rita says those interested in purchasing the book can also do so by going to www.Luckysnipe.com through her daughter and son-in-law Kim and Richard (Chris) Force, who received his MBA from WWU. Rita’s family roots at William Woods run deep – her mother, June Wickell Russell, attended WWU for one year and later worked for years in the University’s business office, her aunt, Marie (Russell) Foster, graduated from The Woods, her aunt, Lola (Wickell) Herring, attended WWU, her cousin, Beverly Condray, graduated from WWU and returns to alumni weekend frequently, her daughter, Kim (Adams) Force, started her MBA at WWU, her daughter Nikki (Nichole) Adams Tutt took WWU dual credit classes while in high school, and her sister, Shauna Russell Qualls, graduated from The Woods in 1972. Autographed copies can be purchased exclusively at the following link. https://www.luckysnipe.com/products/mokane-to-mole-city-a-manchu-vietnam-memoir-bravo-co-nov-1968-nov-1969-by-stanley-j-adams

Amber Cox ’96 & ’98 was honored with the Women in Sports and Events (WISE) Women of Inspiration 2019 award. Cox is the Vice President of Sports for the Connecticut Sun and New England Black Wolves.

Olivia Imhoff ’19 a Boonville native who graduated from WWU last spring with a bachelor’s degree in Criminal Justice, received the Patrol’s coveted Superintendent’s Award when her class of 31 cadets graduated from the academy earlier this winter.

Kayleigh Pivonka ’16 graduated in 2020 as a DVM from the College of Veterinary Medicine at Lincoln Memorial University and begins her first job as Dr. Pivonka. After a year of traveling from as far as NYC and Texas for clinical rotations at various hospitals, she is looking forward to settling in with my horses and finally getting to practice veterinary medicine.

Laura Liebhart ’16 earned her BEI (Board for Evaluation of Interpreters) Advanced certificate.

Sarah Burchett ’18 married her high school sweetheart, Benjamin, and together they moved to St. Louis, MO where she started her job at Signature Consultants as an Office Administrator conducting background checks and processing payroll. Sarah made a note that at Signature Consultants there are three other WWU graduates working there (Alec Mulvhill, Anthony Dewey, and Miguel Hudson).

Victoria Finn ’18 started graduate school at Mizzou and is currently pursuing her M.Ed in School Counseling. Along with this, she recently gained an Associate Director position with A Way With Words and Numbers, a non-profit organization that’s run through Mizzou’s Career Center that provides free literacy and math tutoring in 14 public elementary schools and after-school tutoring at the Daniel Boone Regional Library.

Ashley Bauer ’16 is currently working as a Sponsorship and Public Relations Manager for a Rodeo Production Company. She has also stayed busy with their family Australian Shepherd business and has had the joy of puppies over the last month or two.

Tarrah Young ’19 is living in Bloomington, IL working as a sales professional.

Adraquay Quinnine ’15, ’18 is a professional women’s basketball player, and while her plans were to travel overseas to play, the COVID-19 virus has put those plans on hold.