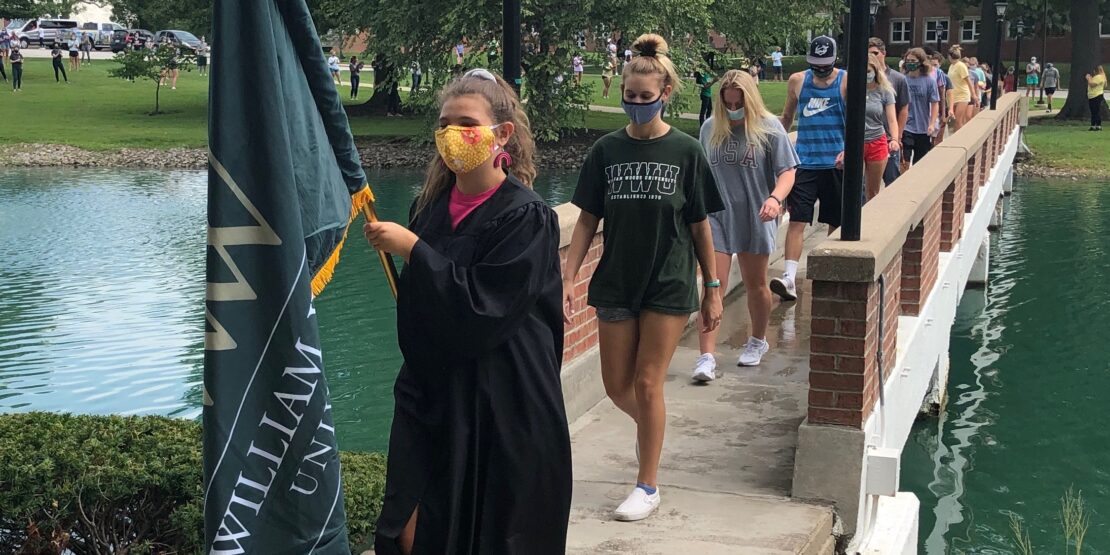 It still occurred, even during the Depression and World War II.

But now today, on August 11, 2020, the oldest and most cherished tradition in William Woods University (WWU) history still managed to break new ground.

Welcome to the first-ever WWU Ivy Ceremony that occurred during a global pandemic. Actually, today’s event that marks the start of every new undergraduate student’s life at The Woods was the first of six mini-Ivy Ceremonies, featuring a portion of the 2020 incoming class in a nod to physical distancing realities of the COVID-19 era. The other five will occur throughout this week.

Facing an audience of 26 mask-wearing new Owls and their parents from above the steps to Dulany Auditorium, President Jahnae Barnett delivered her official welcome in an environment unlike any of the previous Ivy Ceremonies she has presided over as president.

“You can do it all here at William Woods,” said President Barnett in her remarks. “But be sure to take care of your total self – intellectually, socially, spiritually and healthfully.”

Never has there been a time when the “healthfully” part will be more important, as the University is set to open for its 150th year while co-existing with an unpredictable and unsettling health crisis. With masks, physically-distanced classes and an obsession with cleaning and disinfecting, it figures to be a year like no other at The Woods. And it began today with a new take on the University’s oldest ritual, which dates to 1899.

For decades, the Ivy Ceremony was held only at graduation each year, when a chain of ivy would link the procession of graduating seniors as they marched to the steps of Thurmond Chapel. Upon reaching the chapel, the president of William Woods would sever the chain, one by one, so that each graduate could symbolically enter “into the future as an individual alumni of William Woods.”  In 1981, the ceremony was added to the beginning of the year for incoming freshmen as well, allowing them to bond together as they crossed the bridge at Senior Lake and entered into their new lives as college students.

“As the ivy entwines itself, so will your life be entwined with the lives around you,” said Abigail Bennett ’22, junior class president, at today’s ceremony. “Every student on the William Woods campus is inextricably linked by the ivy bond, which symbolizes the development of friendships, goals, common purposes and learning to last a lifetime.”

With the University kicking off the fall semester with in-person classes next week, it was only fitting that the Ivy Ceremony would still be held on campus during this unusual year of 2020, with concessions to health and safety that are now part of the “new normal” at WWU in the age of COVID. Which is why the ceremony was held completely outside as one of six ceremonies, allowing students to physically distance while not losing out on one of William Woods most revered practices.

“I was glad to experience this, even if it was a little hot and wearing a mask took a little getting used to,” said incoming transfer student Tara Hillebrand ’23, from Montgomery City, Missouri. “I am here to study Equine Science, today was the start and I am super excited about it!” The remaining ceremonies will take place outside Dulany Auditorium on August 12 at 11:30 for honors students and their families; and on Thursday and Friday, August 13 and 14th, at 11:30 a.m. and 5:30 p.m., each day.

Have you seen the latest issue of @sportslockermagazine? #WilliamWoodsUniversity #undergraduate Lanie Lowry @lanielowry is featured on pages 64 and 65! Check it out online at www.sportslockermagazine.com and see our ad on page 65.

It is time for the #FridayFacultyFocus featuring Brenda Popp, #Professor in Finance with the #WilliamWoodsUniversity #SchoolofBusinessandTechnology.

At William Woods, our #smallcampus is truly a #community where there is

Five Questions with University Counselor Jenny Coon | William Woods News
Jenny Coon is one of the two university counselors at William Woods University, with whom students can set up an appointment with to talk about issues like anxiety and feeling overwhelmed in school. C
news.williamwoods.edu
15 1    View on Facebook

A #Thursday #ThankYou to everyone for your diligence in keeping the #WilliamWoodsUniversity campus safe! As of today? #ZeroCOVIDcases 👍🏻❤️