Bartoz Beda, an internationally renowned artist whose exhibitions have been displayed all over the world, will be bringing his “Ten Starts From One” art exhibit to William Woods University (WWU).

“Ten Starts From One,” featuring the work of the Polish-born artist, focuses on social and political issues while inviting viewers to discover the metaphysical connections between his paintings and the space around them. The exhibit will run on the WWU campus for four weeks beginning October 26 at the Mildred Cox Gallery. Admission to Cox Gallery is free. 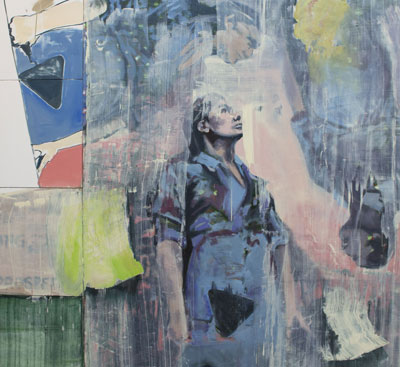 “I like to explore political issues in my work,” said Beda. “These issues often expose themselves in hidden meanings, and Art has often educated and opened eyes to social and political issues. I want to believe that my paintings reveal on the canvas a kind of intellectualizing of the internal human conflict of reality and hope, and of my conflict as well.”

Beda’s work has been shown around the world, including in the U.S., United Kingdom, Spain, Germany, Poland and Colombia. A resident now of Manchester, England, Beda was chosen for the 2012 Catlin Art Guide as one of the most promising emerging artists in the U.K., and also won the esteemed Towry Award for the Best of North of England. He received both his BA and MA in Fine Arts from the Manchester Metropolitan University in 2011 and 2012.

The Ten Starts From One exhibit will be on display at the Cox Gallery in the Gladys Woods Kemper Center for the Arts on the William Woods campus. The show will run from Friday, October 26 until Friday, November 18, with an opening reception and gallery talk on October 26 from 4-6 p.m.