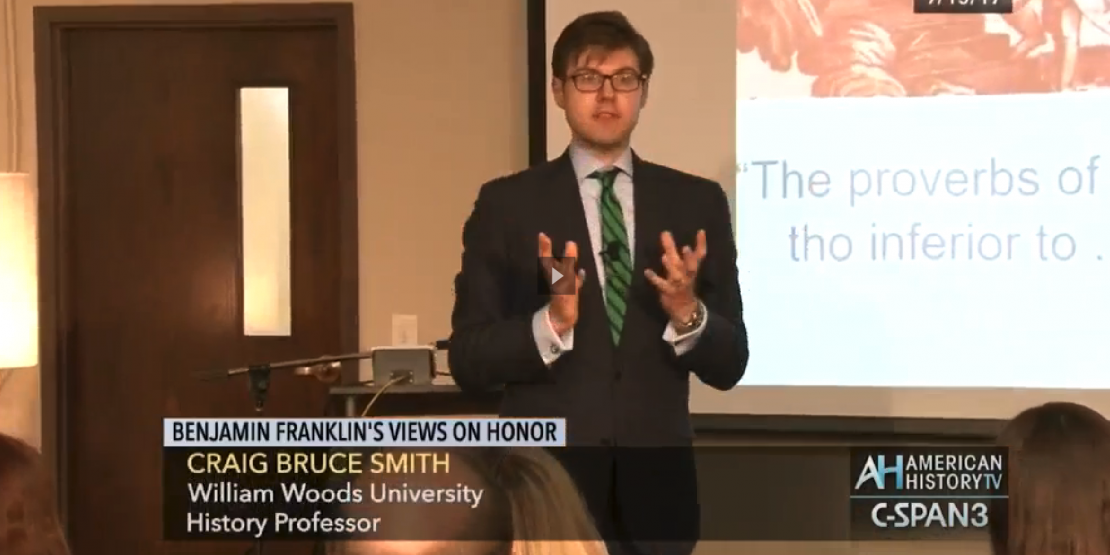 The director of the History Department at William Woods University (WWU) will be delivering a talk this week that will be aired at a later date on C-SPAN. WATCH THE VIDEO

Dr. Craig Bruce Smith, Director of the History Department at WWU and an Assistant Professor of History, will present “’Early to Rise,’ Benjamin Franklin and the Creation of Ascending Honor” on Friday, September 15 at the University of Missouri, Columbia. The presentation is part of the Kinder Institute on Constitutional Democracy’s Fall 2017 History Colloquium Series, will take place at 3:30 p.m. in room 410 at Jesse Hall on the MU campus, and is free and open to the public.

The talk will focus on Franklin’s innovative perspectives on honor and ethics. He believed your status was not about the level of society you were born into, but how you acted and behaved in the world.

Dr. Smith’s address will be filmed by C-SPAN, the national cable and satellite television network that airs political and policy events as well as historical programming, and aired on American History TV soon after.

Dr. Smith’s work focuses on early American cultural and intellectual history during the eighteenth century and the Age of the Revolution, with particular emphasis on ethics and national identity and broader interests in colonial America, the early republic, leadership, the Atlantic world, military history, and the American Founders. His first book, American Honor: The Creation of the Nation’s Ideals during the Revolutionary Era, will be published in April 2018 by the University of North Carolina Press. (It is currently available for pre-order on Amazon.)

He is presently researching his next project, “’The Greatest Man in the World,’ A Global History of George Washington.” He joined the faculty at William Woods in 2016.