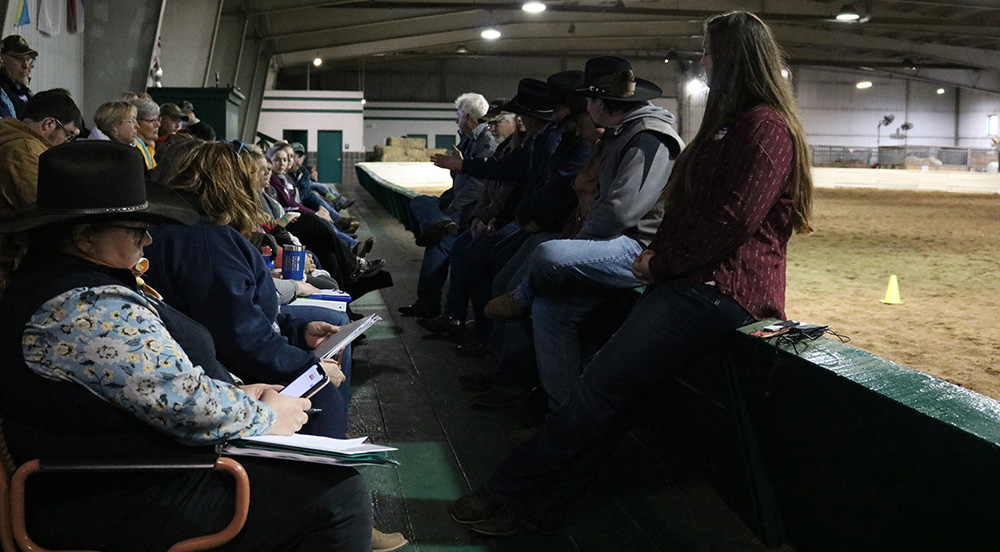 Earlier this month, the Missouri Fox Trotter Horse Breed Association (MFTHBA) visited William Woods University for the first time.  Anna Johnson ’19 is serving as a consultant to the organization, and was the clinic manager, bringing a new breed of horses to The Woods for students to learn about. The initial goal of MFTHBA in hiring Johnson was to gain more judges for their organization, but because of her practical experience gained at William Woods, Johnson has been able to touch even more areas within the association.

“I created all of the curriculum for the clinic, selected those who worked it with me, and managed it start to finish,” Johnson said. “It’s part of a much bigger initiative to improve the quality and consistency of their judges and increase their available pool, and it was great to be able to do that at what I call home, William Woods.”

Johnson came to WWU as a transfer in the fall of 2016, immediately joined the judging team and earned a spot on the U.S. Nationals team. That team won the Senior National Championship, and Johnson placed 2nd overall individually (after tying for first place and losing by the second tie-breaker) out of over 200 competitors. Because the team Johnson competed on won, she was ineligible to compete again, so the next year she assistant coached the judging team.

Johnson then began judging open Hunter/Jumper and Western shows across Missouri in 2018 on her own. The same year, she was selected for an internship working under the Arabian Youth Association helping run the U.S. Nationals judging and hippology contests, and she was also selected to be a part of the school’s Mentor Mentee program where program director Jennie Petterson and her created an Introductory Workbook for Competitive Horse Judging. These experiences, along with experience volunteering at dozens of judging clinics and competitions at William Woods, allowed Johnson to learn how to not only judge, but teach others how to be proficient judges and manage events.

It was not only the experiences from WWU, but the connections she made that helped Johnson get to where she is today. In 2019, Petterson, Director of Equestrian Studies at WWU, asked Johnson if she would want to become a judge for MFTHBA.

“I just said yes,” she said. “That’s kind of my motto, just say yes, and then figure out how you are going to do it.”

Johnson then presented a proposal to the President and Board of MFTHBA on how to grow their pool of judges.

“Having that network of professors and real-world experience was so helpful to my career now,” she said. “It is what allows me to just say yes and take each opportunity by the horns.”

For the clinic on Saturday, February 15th, the goal for MFTHBA and Johnson was for around a dozen auditors of the clinic and for five new people to start the judge certification process. On the day of the clinic, Johnson had 50 people in the stands and 16 took steps to become carded judges with MFTHBA.

“From my experience on the judging team, to Jennie’s equine evaluation class, being a part of the Mentor Mentee program, and my internship, I was fully prepared for every step of running this clinic,” said Johnson. “It was amazing to have Jennie Petterson and Liz Haben (Professor of Equestrian Studies) along with many MFTHBA and WWU student volunteers available for assistance and support, but the clinic really just ran itself.”

Continuing with MFTHBA, Johnson’s goal is to increase the number of horse shows that these new judges can serve at, create more educational materials, and so much more.

“I’m trying to not only increase their number and quality of judges, but am hoping to increase membership and horse show participation,” said Johnson. “And all of this goes back to promoting the breed and the prosperity of the horse.”

Johnson plans to continue in her consultant role indefinitely, but is happy to continue to promote the breed. Having graduated from WWU with the goal of being a judge herself, she is gratified to already be in the role of helping others become judges, so shortly after graduation.