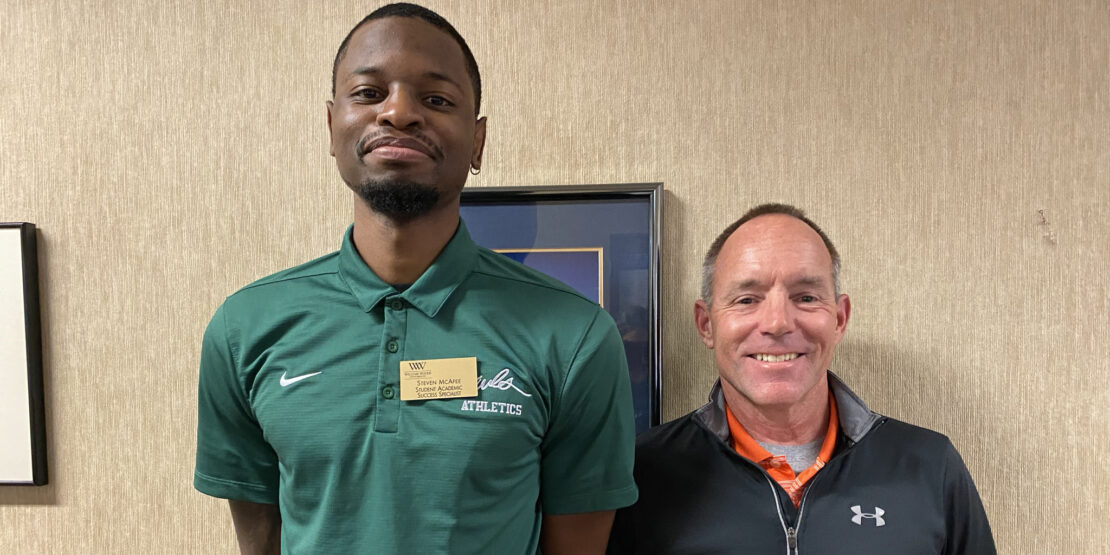 If William Woods students utilizing the Academic Services office have felt that they were being “coached” to academic success more so than ever lately, they have good reason to be.

WWU Academic Services hired two new employees this year, Roger VanDeZande and Steven McAfee, and both have a similar reference point when it comes to motivating and directing students to academic success: extensive backgrounds in athletics.

Roger VanDeZande found his way to William Woods as an academic advisor after retiring from coaching and teaching at Russellville (Missouri) High School last May. His retirement, after 31 years coaching football at both the college and high school level in Oregon, Illinois and Missouri, lasted all of two and a half months until he decided that he still wanted to be involved with helping students. VanDeZande went job hunting and came across an opening at William Woods, taking a position as an academic advisor that allowed him to continue his passion of helping students while also providing him time to be able to watch one of his sons play football at Benedictine College.

As an academic advisor, VanDeZande mainly assists online graduate students and students in graduate education programs. He also helps with other majors such as the Organizational Leadership Master’s Degree and the Master’s in Health Administration. VanDeZande takes care of answering questions about registration, how the programs go and what classes students need to take every term. Overall, he currently advising around 700 students.

VanDeZande uses his sports and teaching background to aid him in advising his students.

“Because I coached and taught for so long, and a lot of the students that I advise are teachers right now while working on their second degree, I understand what they are going through because I have been through a lot of it myself,” he said. “I understand the demands and the restrictive time the students I advise have.”

Steven McAfee came to his new role as a Student Academic Success Specialist at William Woods through Charles Belt, the head men’s basketball coach at The Woods. Prior to coming to WWU, Belt served as an assistant coach at Beloit (Wisconsin) College, which is where McAfee played basketball and graduated from. Belt contacted McAfee and told him that there was a job opening at William Woods that he thought McAfee would be well suited for – in academic affairs.

“My job is basically to help students succeed in way, shape, form or fashion,” said McAfee. “Whether that be with tutoring, with having a conversation or just being an ear for students to talk into.”

He also reviews the academic progress with students and their advisor and makes sure that the students who need tutoring are getting it.

McAfee was a college basketball player at Beloit College and he uses his experience as a student-athlete to help his students get academic success.

“My background with sports helps a lot in ways where I can connect with a lot of people in different situations,” said McAfee. “With sports, especially basketball, there is a lot of adversity that comes and goes which is also how school life is.”

“When you ask me what I think that Roger and Steven both bring to the table, I actually think that they bring the table with them,” said Angelette Prichett, Associate Dean of Academic Student Services. “I think that they are both excellent additions to Academic Services and are working toward building a foundation for how we can be more effective in our work that we do with students every day. They bring creativity, energy, and a desire to help students. That is exactly what I feel like those two positions need at this particular time.”

Few years in recent William Woods memory have seen the establishment of as many new campus landmarks as in 2022. And now, the most prominent project of them all – the rebuilding of the famous bridge across Senior Lake – is now complete. This week the newly rebuilt bridge, which has yet to be for...
193 19    View on Facebook

William Woods University7 days ago
Did you know WWU was founded on the principle of giving? This Giving Tuesday we invite you to honor the legacy of Dr. William S. Woods and make YOUR impact on The Woods! Learn more and make your gift here: www.williamwoods.edu/givingday
#GivingTuesdayWWU #WilliamWoodsU