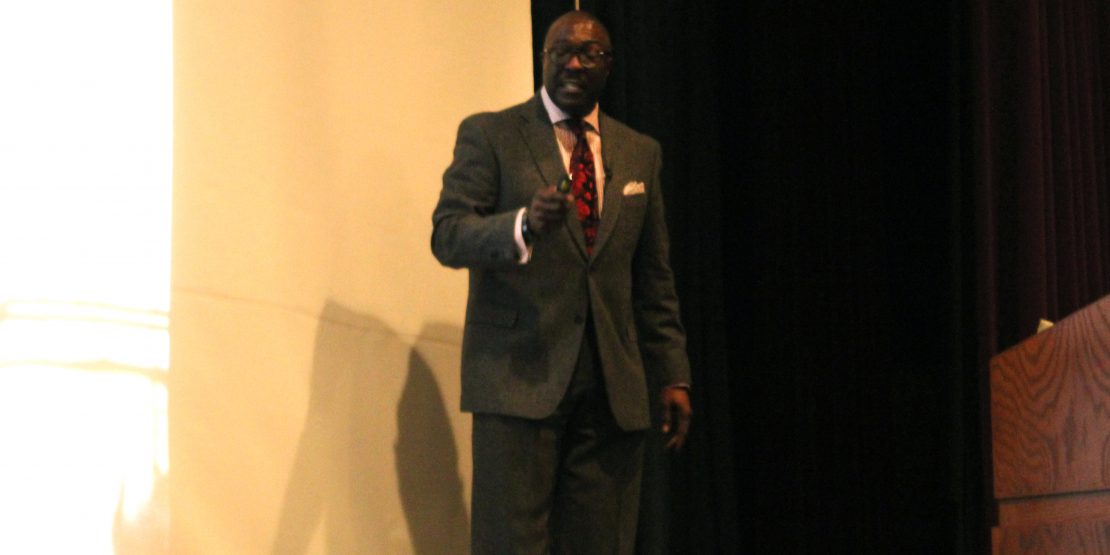 Bob Kendrick has dedicated much of his life toward sharing the story about Negro Leagues Baseball in America, and honoring the men who played it. The President of the Negro Leagues Baseball Museum in Kansas City, Kendrick brought his passion to William Woods’s Cutlip Auditorium on Monday February 24, to present on the topic as part of the President’s Concert and Lecture Series.

Kendrick started as a volunteer at the museum in 1993 while working in the promotions department for the Kansas City Star newspaper. One of his assignments was to promote the Negro Leagues Museum’s first-ever traveling exhibition debut, his first introduction to the museum. The promotion was a success, drawing in 10,000 people in one month, causing museum officials to realize that they had something special. Kendrick accepted an invitation to serve on the museum board for five years while doing marketing and advertising as a volunteer. He became the first director of marketing in 1998 and he has been involved in the museum ever since.

He hopes the audience will walk away understanding how precious the story of the Negro Leagues is and how impactful it is not only on the field but off it as well. Kendrick believes that the story may be more important off the field because it is as much a civil rights story as a baseball story.

“What I think the success of the Negro League tells us is that we have so much more in common than we do different,” Kendrick said. “It is depicted through the lens of baseball. We see this commonality, but we also learn to not be fearful of those who are different than we are. We should be embracing our differences. Hopefully through lens of baseball and triumphant story they walk away understanding that.”

One of the stories that Kendrick told at WWU was about his favorite Negro League baseball player, catcher Josh Gibson. Gibson is sometimes called the “Black Babe Ruth” and others who saw him called Babe Ruth the “white Josh Gibson.” Gibson is still believed to be the only man to ever hit the ball completely out of the Yankee Stadium. Gibson was a great hitter with lifetime batting average of .354.

“I would have loved to see him play,” Kendrick said. “He was just so strong and physical, swinging a 40-ounce, 41-inch bat. Josh Gibson was a catcher with big, powerful forearms and great eyes for seeing the ball. He did not strike out a lot. “

Another example was of Buck O’ Neil, who played first base and was a manager for the Negro League Kansas City Monarchs. As well as being a great player himself, O’Neil helped develop the hall of fame talent of Lou Brock and Ernie Banks.

Kendrick remembered that O’Neil was up for induction into the Major League Baseball Hall of Fame in 2006. The induction committee for the Hall of Fame consisted of Negro League Baseball historians who had a list of 35 players that they could elect for the hall of fame with no limits. Kendrick received a call from the committee that O’Neil came up one vote short, and had to break the news to O’Neil. The reaction to the news was different than one would expect as O’Neil asked about the other 17 players on the list and to speak on their behalf because he was excited that they had gotten in. Kendrick believed that the speech O’Neil gave to the crowd of 400 fans waiting was one of the greatest moments in sports history.

“From our upstairs conference room to the field of legends was the longest walk of my life, knowing I had to break the news to the crowd of 400 people,” Kendrick recalled. “What O’Neil taught us was how to handle disappointment and setbacks. He would never allow his disappointment to override those who got the opportunity. I learned from Buck that you can get further in this life with love than hate. That is what carried him during his 94 years on Earth.”

Kendrick’s presentation was moving for William Woods students. Ananiah Talton ‘21 had never heard of the Negro Leagues or its history until hearing Kendrick’s speech. She came up to him afterward to congratulate him on how moving his speech was.

“Even though I may struggle in life, the speech taught me that I can overcome it,” Talton said.

Bailey Tutt ’21 found it interesting that in order to get to the field when visiting the museum to see the stone players, you first have to in effect earn it.

“You have to walk through and learn their stories before you’re able to earn the right to see them,” Tutt said.

Prior to the speech, Kendrick had dinner with the William Woods Baseball team. One of the players, Trevor Garriott ‘20, believed that Kendrick’s passion for what he does is amazing, noting that Kendrick worked five years without compensation as a volunteer to start his career. Much like the players in the Negro Leagues were determined to play professional baseball even if the Major Leagues weren’t available to them.

“Regardless of the circumstances, they wanted to play ball and were going to no matter the conditions,” Garriott said. “None of them were bitter about their situation but were happy and dedicated to their careers. This illustrates their character and perhaps played a key role into the way the game of baseball changed through the mid-century.”

Joining Talton and Garriott in the audience was academic advisor for online students, Sarah Hamilton. She believes that Mr. Kendrick is an amazing story-teller.  As a Kansas City Royals fan, Hamilton listens to games on the radio all summer, and has often heard Kendrick as a guest in the booth for an inning or two telling stories about the players who comprised the Negro Leagues.

“I love the anecdotes he told,” Hamilton said. “His talk here at William Woods reminded me about the ways we revise history.  Players in the Negro Leagues were professionals—they were paid to perform.  But we don’t count or acknowledge their records unless they were able to play in the ‘Majors.’  Often the stories we hear aren’t the whole story.  I’ll listen to my baseball games this summer with a deeper appreciation of where so many of the skills and the strategies come from. “

The WWU baseball team plans to visit the Museum in March. Kendrick hopes that, after hearing his speech, that members of the William Woods community will make the trip up to Kansas City to experience the museum and experience its inspiring message. “If you dear to dream and believe in yourself, you can do and be anything you want to be,” Kendrick said. “They dreamed of playing baseball and had no idea that they were making history. They did not care about history. They just wanted to play ball but ended up displaying tremendous passion, perseverance, determination and courage in the face of adversity.”