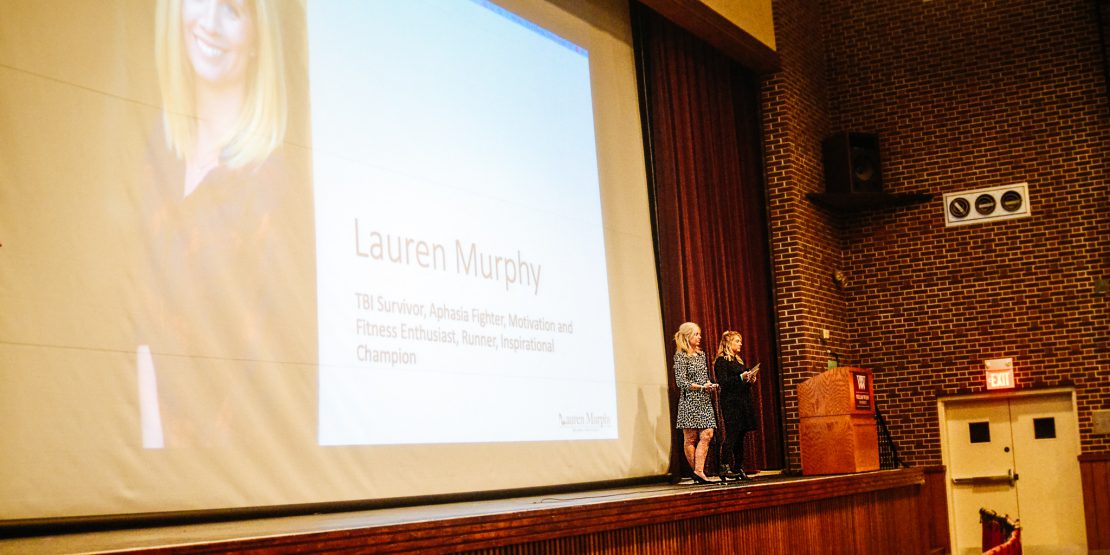 A standing ovation filled Cutlip Auditorium for St. Louis native Lauren Murphy, who had just shared her story about recovering from a traumatic brain injury to a receptive audience of William Woods students.

“This is a great college,” Murphy said. “It was like they (the audience) gave me a big hug.”

A motivational speaker and advocate for those who have suffered a traumatic brain injury similar to hers, Murphy told her story at The Woods on January 15 at Cutlip, a story that amounts to a triumph of the human spirit.

Six years ago, in Los Angeles on business, a vehicle struck Murphy while she was out on a typical morning jog. The accident nearly killed her, and caused her to suffer a catastrophic brain injury. Her recovery has been long and treacherous, beginning when a speech therapist had to help her with trying to communicate because Murphy suffered from aphasia. Aphasia is when brain damage causes someone to lose the ability to understand or express speech. Her therapist and her mother, Colleen Murphy, performed many tests to help Lauren slowly regain that ability.

A video in the presentation demonstrated how early in her treatment, Murphy struggled to recall her first and last name, and her street address. Colleen Murphy mentioned it was not because she did not know the simple answers; it was because she didn’t understand the questions.

“It is important to have a cheerleader in the good times,” Colleen said.

Colleen serves as one of her biggest cheerleaders, and has helped Lauren to rewire her brain by, for example, testing Lauren on her memory using the names of family.  A video in the presentation showed Colleen testing Lauren with pictures of three people on the table and one of them was her sibling. For one minute, she slowly wrote the name down with the help and encouragement of her mom.

“There is no doubt in my mind with her tenacity and her hard work that she would one day get up on her own to tell her own story,” Colleen said.

In relating that story, Lauren had five key takeaways for the audience:

“Number one – show up,” she said. “Two, find your cheerleader. Three, kindness is free. Four, work hard. And five, never give up. Never give up!”

Life lessons shared in the presentation inspired audience member Emma Pfortmiller ‘21. She came away focused on the importance of the value kindness.

“I feel the world would benefit from much more kindness and understanding towards the battles that we may not even know others around us are facing,” Pfortmiller said. “In my own life, Lauren’s presentation has now inspired me to chase my dreams and to never give up because you never know how much time you have or what life will throw at you.”

Signs in Lauren’s bathroom and bedroom, displayed in the presentation, also impacted audience member Emily Wolf ‘21. The signs encouraged Lauren with sayings that challenged her to envision herself doing the act, put the work in and believe in herself.

“I liked the ‘read it and do it’ thing on the boards because it not only motivates you but someone else,” Wolf said. “We have a lovely life compared to others. The family proved you could make it work and it was very inspiring.”

“Throughout the whole process, it was incredibly important for me to believe in myself,” Lauren said. “To tell myself ‘I will get my words back.’”

One of the interesting sidebars to the story was the creativity of the many donors that supported the family during Lauren’s ordeal. One donor thought outside the box by gifting tide pods to assist the Murphys with laundry needs. Another donation the family received was from a mother, who called the middle school and placed money in the accounts of Lauren’s brother and sister for the year. This part of the presentation influenced audience member Alexis Willingham ‘20.

“I plan to apply Lauren Murphy’s story to my life by showing up for the people I love and supporting them 100 percent because they deserve to have someone in their corner,” Willingham said. “I will get creative, when I do kind things for others.”

Hard work was one of the keys to Lauren’s success. For example, she had to relearn how to walk and run. Now, she can run a full mile, again. Her first mile was over 21 minutes with her mom by her side. Now, Lauren runs with her dad and her average time is around 10 minutes. She has competed 35 5Ks. On her 32nd 5K, she was less than a half mile away from the finish line, but had to end the race in the back of ambulance. Her sister finished the race for her and received Lauren’s medal, which Lauren did not want because she wanted to earn it. Lauren went back to the park later with her mom and finished the race once healthy.

Which is coming a long way for someone whom doctors once predicted would never be able to move her right arm, walk or run, or even be able to speak or understand others.

“They were wrong,” Lauren said. “I still want to achieve many things, and I will.”