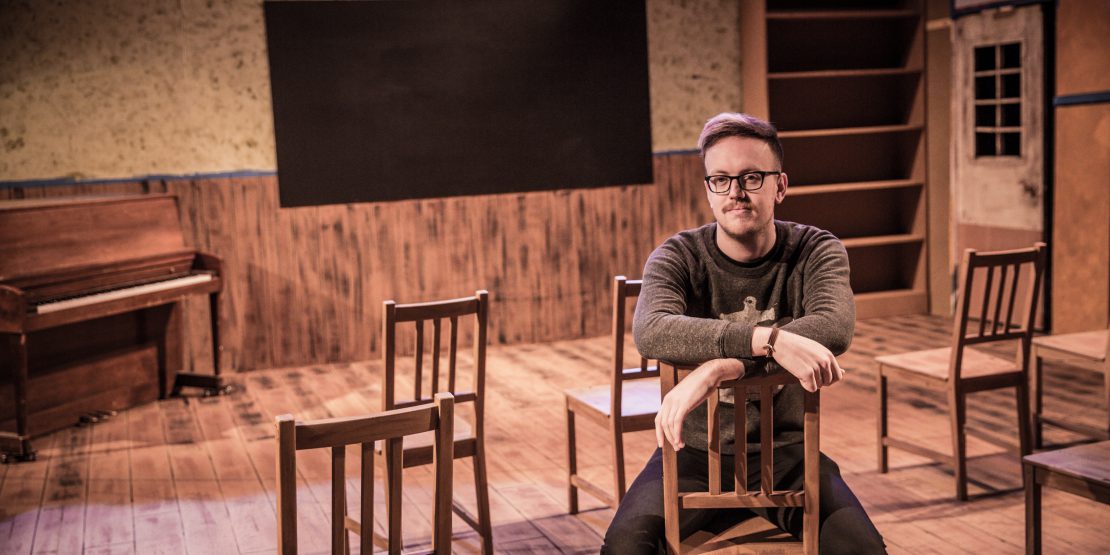 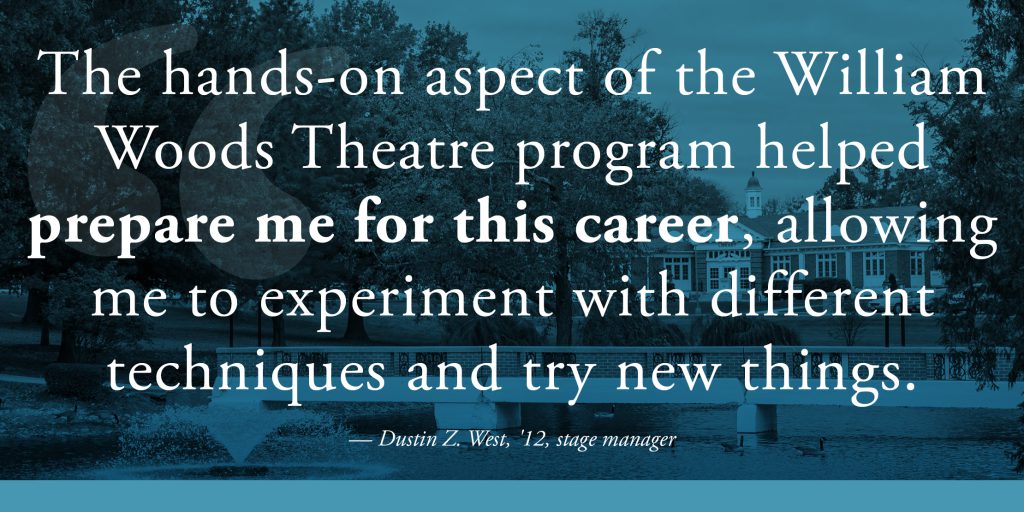 Coming Back to William Woods

After graduating from William Woods University a few years ago, I’m back for a few weeks this fall to design the Theatre department’s latest production. The year after I graduated, I collaborated on two productions with Professor Melissa Alpers-Springer. This time, she reached out to me about designing scenery, lighting, and sound for a new production of “All Through The Night” by Shirley Lauro. It’s an exciting play that focuses on four German women’s experiences before, during, and after World War II. After reading the script several times, I did a lot of research to figure out how we wanted to tell this story. Early on, we decided to make the play an intimate experience, so the seating is actually on stage in a style similar to a tennis court. By breaking theatrical convention, we realized that we had an opportunity to make our own rules with this show. 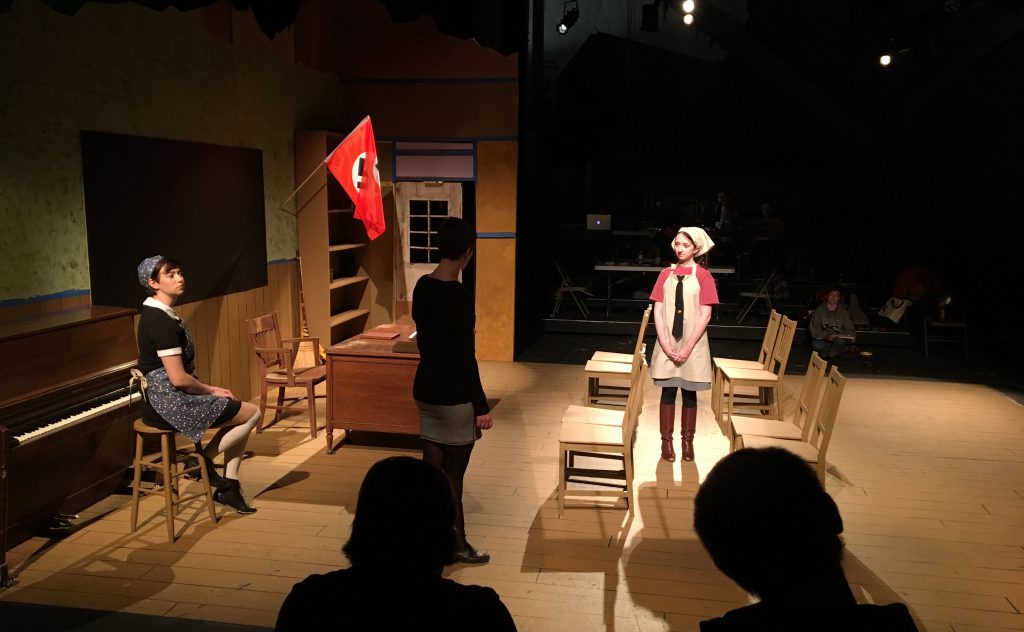 Read more about the performance of “All Through The Night.”

Returning to William Woods feels like coming home. I’m getting to work closely with students, which I enjoy. I learn from them and they get the chance to interact with someone who brings a different perspective than their professors. They’re asking lots of questions about stage management, what it’s like to work in theatre, and how I got my start.

An Early Call to the Stage

I come from a family where everyone is involved in sports. My dad coaches baseball and my brother and sister both play multiple sports, but that lifestyle never really fit for me. At an early age, I started taking music and dance lessons. I grew up in Kansas City, Mo., which has a really great arts community, so I found theatre by performing in community and high school productions and going to different theatre festivals.

It was at one of these festivals that I was first introduced to William Woods. As a high school junior, I attended the week-long International Thespian Festival in Lincoln, Nebraska. Students get to see shows, participate in workshops, meet other people interested in theatre, and audition for productions and colleges. While I was there, I met Joe Potter, the assistant professor of performing arts, and quickly found that WWU might be the right fit for me.

I was drawn to the theatre program at William Woods because it is very hands-on. As a student, you don’t just take theatre classes, but you’re in productions and also get to work behind the scenes.

The entire program is very focused on creating opportunities for students to gain experience outside the classroom.

Even in my freshman year, I was able to design productions and really get my hands dirty. Because of the size of the theatre department, you’re not only designing the sets, you’re the one who has to put it together. It’s building and painting scenery, figuring out how to hang lights, and seeing what happens if you do something like this or like that. The professors in the program are incredible mentors who give you a lot of freedom and flexibility.

I was also very involved with Jesters, the student-run theatre organization. It had a revival in my freshman year and it gave me multiple opportunities to direct and design my own productions. These opportunities allowed me to see what was possible and stretch my creativity to a fuller extent.

Experiences like this are what has led me, in my career, to continue to explore opportunities in areas that I’m uncomfortable with. For example, I’m currently designing the sound for “All Through the Night”, which is something I know nothing about. Yet, I like to play with technology and figure out how to make things work. It all goes back to the hands-on experience I received in college and finding that figuring out how to do something yourself can be much more valuable than sitting in a classroom or reading about how to do things.

Being at William Woods and getting to try so many things really opened my eyes up to the idea of theatre as a constantly evolving medium. Every project is unique and the same rules don’t apply from one project to the next. There are conventions that people have created over centuries, but sometimes you just have to break them and do things your own way.

Career Prospects as a Student

While in college, I also began exploring career opportunities beyond The Woods. During the summer after my sophomore year, I worked as an apprentice for the Santa Fe Opera. The Jesters had gone as a group to the Kennedy Center’s American College Theatre Festival in Washington D.C., and we performed a scene from a production I had directed at William Woods. While I was at the festival, I participated in a series of professional interviews with several companies, including the Santa Fe Opera. They called me back, I did a few phone interviews, and was offered an apprenticeship for the summer.

I worked in their productions services department, helping oversee their five large summer productions. It was a huge risk for me, venturing to a new place and throwing myself into a different experience. However, it allowed me to see some of the highest quality work the industry has to offer and to realize that it is possible to be a part of that.

Read more about West’s apprenticeship with the Santa Fe Opera.

From Actor to Stage Manager

While working at the opera, I was able to see how the combination of music, theatre, and art can create a grand art form, and fell in love with the spectacle of it. I always thought I wanted to be a professional dancer or actor, but through my apprenticeship, I realized that I might make a good stage manager.

There’s something so spectacular about being able to keep all the balls in the air. As a stage manager, you’re the hub of communications. You’re talking to directors, liaising with actors, setting up fittings with the costume shop, organizing technical elements with production managers, answering questions from designers, etc.

When I returned that fall for my junior year at William Woods, I spoke to Professor Potter about exploring stage management as a full-time career. I worked on a few productions that year and started honing my management skills.

I knew that being successful as an actor was going to be really tough. As I had the skills to do something else, I went for it. After graduation, I looked for work as an assistant stage manager — I was open to going anywhere. Over the years, I’ve worked in places like New York City, Chicago, Atlanta, Boston, Memphis, Dallas, and Kansas City. Especially in the freelance market, we refer to theatre as a “gypsy” lifestyle.

After a few years of working around the country, I decided it was time to take the next big leap and move to New York City. I was accepted into the Professional Internship Program at The Juilliard School, where my focus was in stage management. The school is performance-based, so they bring in professionals to direct the shows with the help of student interns, and I was the assistant stage manager on a lot of productions. This experience allowed me to start making connections with people in the New York theatre community, many of whom I continue to work with today.

While an intern at Juilliard, I also began pursuing other opportunities in New York. I even got to work as a production assistant on some off-Broadway shows. These jobs all sort of snowballed into what is now a career, which I am continually floored by.

Every day, I get to make art and they pay me for it.

When you enter a career, it’s important to find your niche. Right now, I’m primarily a stage manager for opera. I’m part of a small group of people who specialize in this area, traveling around the country to work with different opera companies. It’s a specific skill set to read music, follow a score, and be able to liaise with a conductor. Opera is experiencing a renaissance right now, so it’s a great genre to be a part of.

As a stage manager, most of my job involves organizing — everything from rehearsal schedules to singers’ specific needs, and figuring out the best way to make the director’s vision possible.

Theatre encompasses my life now, which is really exciting and terrifying at the same time.

Eventually, I’d like to get back into directing. It would be great to find an opportunity as a resident director of a company.

I think the hands-on aspect of the William Woods Theatre program helped prepare me for this career, allowing me to experiment with different techniques and try new things. And The Woods is still teaching me today! For “All Through The Night”, I’m getting to build a theater inside of a theater and figuring out different techniques to bring this play to life.

If students want to succeed in the theatre world, you just have to jump in and try it.

Don’t let yourself be tied down to a set of rules. Try new things, see what you’re good at, and be open and flexible to whatever comes your way. One of the best pieces of advice I’ve been given is to “Be the ball. Roll!” That, and “the dream is free, but the hustle is sold separately.” There are ups, and downs, but, as long as I keep landing on my feet, I’m grateful to call myself an artist.