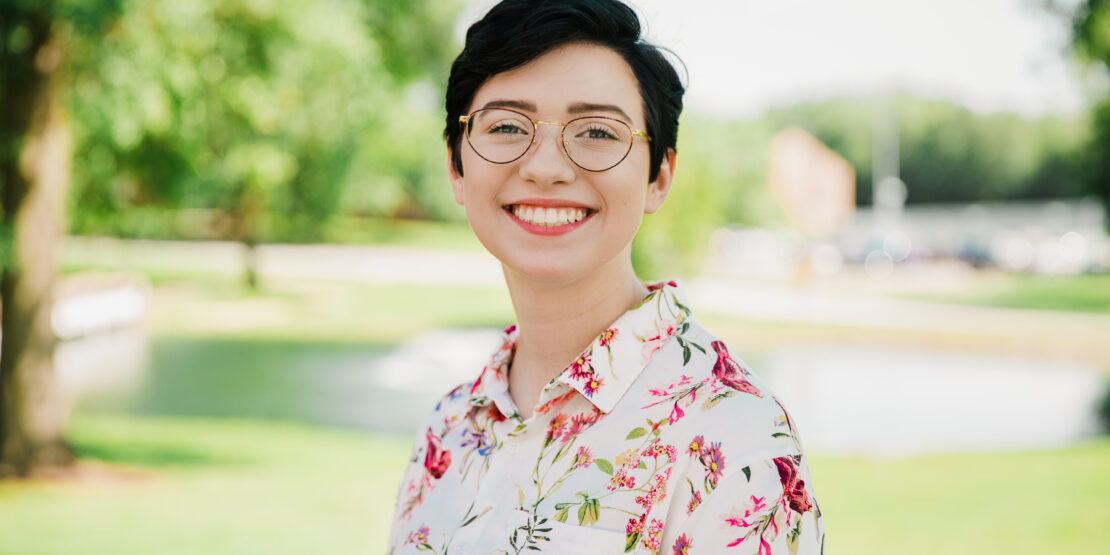 Emma Cunningham, a senior at William Woods University (WWU) and a resident of Lee’s Summit, was honored with a prestigious academic award from the University as part of its year-end Co-Curricular Awards. At the end of each academic year, WWU recognizes a select group of graduating seniors who have achieved excellence in academic, co-curricular and service projects during their time at the University.

Cunningham, who graduated this spring with a degree double majoring in Theatre and American Sign Language (ASL) interpreting, received the Faculty Award from the University.

The Faculty Award is the highest award given to a student by the University each year. It is presented to the 2021 graduating senior who, in the estimation of the faculty of the University, has evidenced exemplary devotion and commitment to the life of the mind. In order to be eligible, the student must be a graduating senior who has completed a minimum of 60 hours through William Woods University and has a minimum 3.75 grade point average.

An honors student, Cunningham used her time at William Woods to actively develop her considerable skills in every aspect of theatre production. She was involved in most of the 23 stage shows available to her during her college career, filling technical roles in all of them, including acting, directing, designing properties and costumes, and working lighting and sound. Her all-around involvement during her four years in the program, including teaching underclassmen the ropes, helped facilitate the culture of professionalism in the production of theatre.

Emma was nominated to compete in the Irene Ryan Acting Scholarship auditions at the Kennedy Center American College Festival every year she entered, making it to the second round of the competition when participants were cut from 300 to 64 – twice. She was given a Certificate of Merit for Achievement in Costume Design in 2019 for the play Dog Sees God, and this year earned a Certificate of Merit for Achievement in Directing the play The Taming. A true leader who has the full respect of her peers, she also took on leadership roles in Jesters Theatre Company, the student theatre organization, and Alpha Psi Omega, the honorary theatre fraternity.

Emma was also deeply committed to her Interpreting coursework, consistently finding ways to connect her two passions. Her research project in the Honors Program was focused on how she could improve the services of the Deaf community and their engagement with the theatre. To enhance that research, she shadow-interpreted the theatre department’s spring production, The Bard of Avon.

In addition to her academic excellence and deep commitment to both the theatre and interpreting programs at WWU, Cunningham also found time to further serve William Woods as a University Ambassador, presenting the university she loves to prospective students and their families.

William Woods University3 days ago
While many schools are reopening post-COVID, students are still going to be impacted by the pandemic. Educators will need to deal with learning loss and educational inequality to help get students back on track. https://bit.ly/3cTqrUl

With schools reopening post-COVID, how will educators deal with the learning loss and educational inequality resulting from the pandemic? They will need strategies and resources to close the gap and get students back on track.
6    View on Facebook

William Woods University4 days ago
University IT is just one of the departments hiring right now at William Woods. Check out our UIT Office Manager role, as well as other staff, coaching and academic positions with a 150-year leader in higher education. https://www.williamwoods.edu/employment/

William Woods University6 days ago
Our Alumni You Should Know series continues today with a visit with Philip Guidry ’10, a graduate of the Exercise Science program at WWU and current state championship track and field/cross country coach and teacher in New Iberia, Louisiana.

If there was an appropriate metaphor for Philip Guidry’s life, it would have to be…
76 1    View on Facebook

William Woods University2 weeks ago
From cursive to keyboards, K-12 curriculum is changing. Read how educators are adapting lessons for the future. https://bit.ly/3xb3xzJ

As digital native young learners enter school using keyboards, it raises the question about teaching handwriting and how school curriculums need to adapt as technology dominates the way we communicate.
4    View on Facebook

William Woods University3 weeks ago
After 23 years at William Woods, Vice President and Dean of Student Life Venita Mitchell will be leaving the University next month. We thank Venita for her service to The Woods and wish her nothing but the best!
https://presidents-corner-blog.williamwoods.edu/