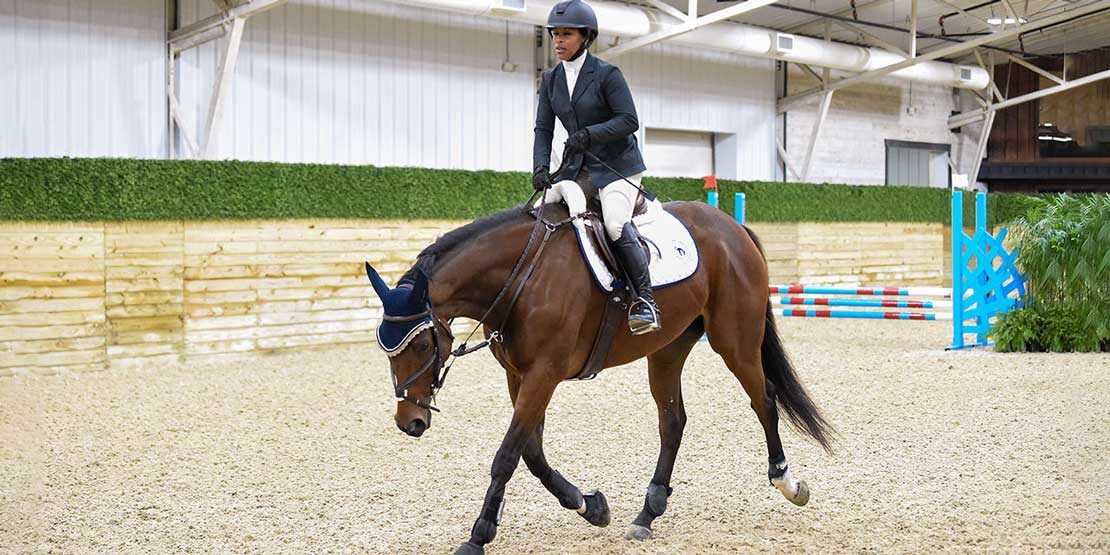 When Kamerra Brown was a young girl in Culpeper, Virginia, horses were her passion. She started taking riding lessons at age five, but the lessons were too expensive for her single mom to afford. So she gravitated to more traditional sports for someone her age, like soccer, basketball and track.

But the dream remained.

“My passion and love for horses still could not be hidden,” said Brown, an Assistant Professor of Equestrian Studies at William Woods since 2020. “I secretly wanted more lessons.”

Brown’s perseverance could be a lesson for us all, as what has become an outstanding career in the equestrian industry resulted in a tremendous honor for her. On September 16, she was inducted into the Athletics Hall of Fame at Delaware State University, her alma mater, for her career accomplishments in the sport she loves.

“It is such an honor to be inducted into the Hall of Fame,” said Brown, who specializes in Hunter/Jumper instruction at WWU. “There are a lot of excellent riders that have attended and are attending Delaware State. I honestly don’t know how to put into words the feeling of being selected among the best of the best.”

Brown’s career, both competing and coaching in the industry, has been spectacular. She was a member of Delaware State’s inaugural equestrian team, and its first African-American member. A four-year letter winner, team captain and team MVP three times during her four years at the school, she earned numerous Most Outstanding Performer awards at various shows along the way. In addition to her individual accomplishments, she also helped lead Delaware State’s hunt seat team to the Varsity Equestrian National Championships in 2008 and 2009, posting wins in equitation over fences.

Moving into coaching and teaching after graduating from Delaware State, Brown served as an assistant coach at South Dakota State University, where she helped lead the Jackrabbits’ Jumping Seat team to its first national championship appearance in 2013 while also earning a master’s degree. She returned to Delaware State as an assistant equestrian coach from 2014 through 2016, helping to lead the Hornets to more national championship appearances and individual honors for team members. She has also worked in the industry as an Assistant Director of Riding at Bridgewater College in Virginia and was listed among the National Collegiate Equestrian Association’s distinguished Alumni in 2021.

Which means that now, the nationally-renowned EQS program at The Woods, and the students who come here to study and learn, get the benefit of Brown’s expertise and experience.

“Kamerra is a talented rider and instructor who has been an asset to the School of Equestrian Studies since her first day on campus,” said Jennie Petterson, Dean of Equestrian Studies at William Woods. “Her dedication to the sport and respect and appreciation of the horses sets a standard for all of her student. We are excited for her to be honored for her lasting impact at Delaware State University in their Hall of Fame.”