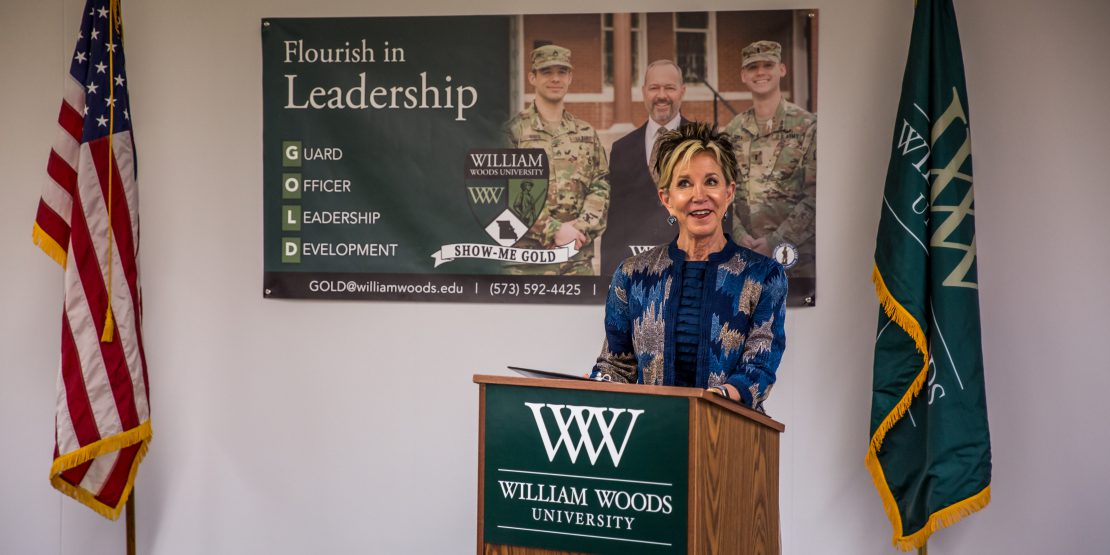 Tenure has been marked by innovation, growth in enrollment, expansion of programs and campus facilities

William Woods University (WWU) today is marking a significant milestone in its 150-year history – the appointment of Dr. Jahnae H. Barnett as president.

“Jahnae Barnett has been a transformational figure in the 150-year history of William Woods,” said Romaine Seguin, Chair of the WWU Board of Trustees. “Her leadership over the past three decades has been instrumental in transitioning the University from a regional, liberal arts college to a coeducational university offering paths from associate to bachelor’s, master’s and doctoral programs.”

Since becoming president, Dr. Barnett has guided the University through a generation of extraordinary change, including the transition to university status in 1993. Under her leadership, WWU has met the challenge of societal change in technology and the workplace, expanding from a campus-centric delivery model to a university that serves students with a mix of on-campus, regional and online options.

This transformation occurred when graduate-level, online, study abroad and 12 new academic programs were established, all under President Barnett’s direction. In addition, the university has created a variety of out-of-classroom programs and experiences to augment a student’s well-rounded education during the president’s tenure, including the Woods Around the World study-abroad program, and the Mentor/Mentee, Service Learning and LEAD co-curricular programs.

The innovative leadership of President Barnett has been clearly illustrated by the numbers. Since she became president, William Woods University’s total enrollment has grown from 750 students to more than 2,000; the university’s endowment has increased by nearly 250 percent; WWU eliminated its long-term debt and has maintained an operating budget in the black for 18 straight years; and infrastructure and capital improvements on the WWU main campus in Fulton have exploded. Her tenure has seen the construction of the Center for Human Performance, Kemper Center for the Arts, Rowland Applied Riding Arena, Firley Soccer Field, a new baseball/softball complex, Anderson Arena, four new sorority residence halls, new residence hall complexes and numerous renovations and upgrades.

“It has been my honor and life’s work to lead William Woods University,” said President Barnett. “I am grateful to the generations of students, faculty, staff, alumni and supporters who have made our University what it is today, and am more excited than ever about its future.”

Also the first president to be promoted from within in the history of WWU, President Barnett served as Vice President of Admissions, Retention and Development at the university from 1983-1990. Her relationship with William Woods began in 1973, when she joined the university as Chair of the Department of Business and Economics. President Barnett holds a Doctorate of Philosophy in Higher Education and Student Personnel Services (1972) and a Master of Business Education (1967), both from the University of Mississippi. She is member of the university’s School of Education Hall of Fame, and is also a past recipient of the Ole Miss School of Education Alumnus of the Year award. She received her bachelor’s degree in business from Arkansas State University, where she was named as a member of the university’s “100 Most Distinguished Figures” as part of the Arkansas State Centennial Celebration in 2009.

Dr. Barnett has been married to Eddie Barnett, a successful business owner, real estate developer and former football player for the University of Mississippi, since 1967.

William Woods University2 weeks ago
Thank you to all who have given to the re-imagined President's Giving Society. Whether this is your first time giving, or you have been a contributor for many years, we appreciate your loyalty and commitment. Together we are building a society for the future. Explore the benefits of membership: https://www.williamwoods.edu/alumni_and_giving/giving/presidents_giving_society.html

William Woods University2 weeks ago
Incoming and returning students: There's still time to get your Covid vaccine in preparation for fall. Let's knock out Covid together!