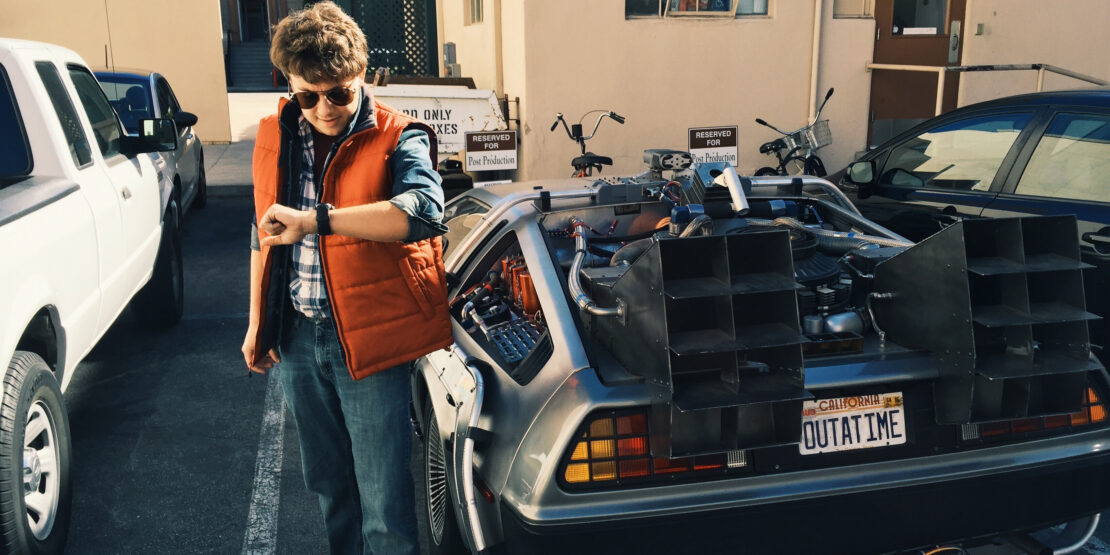 If someone said that the story of Joshua Potter’s life could be a Hollywood production, they would pretty much be telling the truth.

That would be because the 2006 graduate of William Woods, who grew up in the University’s backyard of Fulton, is these days living out his professional dream of working as a post-production coordinator in the film and television industry in Los Angeles. Though still just in his 30’s, Potter has already racked up impressive credits like working on such programs as Pretty Little Liars for ABC, Zoey’s Extraordinary Playlist for NBC Universal, and The Orville for FOX, while rubbing shoulders with luminaries like Seth MacFarlane, Jon Favreau, Bill Nye, Jeff Goldblum, Michael B. Jordan, Charlize Theron and Neil deGrasse Tyson, among others.

Currently, Potter is working on the first season of The Cleaning Lady for Warner Brothers/FOX, while drawing, creating, writing and hoping to eventually pitch some of his own ideas for programs on the side. He is a long way from his Callaway County youth and college years at The Woods, but his story is more work and persistence than fairy tale.

“It takes hard work, diligence, and time to break into this industry, unless you have major connections,” said Potter. “To put that into perspective, it took me a couple of years before I even got my foot in the door, and that was partially luck because I had a connection and was in the right place at the right time. That’s the nature of L.A. and the entertainment industry – you never know who you will run into and there is no one ‘right path’ into this business. Everyone’s story is a bit different, which is part of what makes this industry so great!”

Revenge of the Nerd

Finding his way to the film and television industry was perhaps not very far-fetched when you consider Potter’s upbringing.

“Both of my parents came from theatre backgrounds, and my dad (longtime WWU Professor of Theatre Joe Potter) lived and worked in L.A. for a little bit, mostly at Warner Brothers,” he said. “I was heavily influenced by the films of Spielberg and Lucas as a kid, namely Star Wars, Indiana Jones, Back To The Future, The Goonies, Ghostbusters, the list goes on and on.”

“I eventually realized that I was a HUGE nerd! I also realized that if I worked in the entertainment industry, I would get to do a little bit of everything I loved to do like writing, directing, producing, concept artwork, visual effects, sound design. It was the perfect choice!”

Fortunately, Potter had another perfect option for him right there in his hometown of Fulton – William Woods University, where he earned a Bachelor’s degree in Graphic Design in 2006.

“I chose William Woods for the excellent Arts program and the instructors therein, many of whom I already knew from growing up in Fulton,” he said. “I received a strong core foundation in Art history, visual art and creative writing at WWU, and was given room to explore my specific interests from there. But one of the most valuable things I learned at William Woods was how to give and take constructive criticism regarding things like artwork, and how to better navigate being part of a creative team.”

“The Film and Television industry is highly collaborative and everyone has an opinion and wants to be heard. Having knowledge on how to navigate, filter and parse through all of that is invaluable.”

Potter’s years at The Woods included late nights working on film projects, spending time in the Art building and theatre, hanging out with his brothers in Phi Gamma Delta fraternity and serving as a disc jockey for the campus radio program “The Pulse.” But after graduating in 2006, it was time to script his most important story – that of his own life.

Embarking on his dream of working in film and television first took Potter to New York City, where he used his graphic design degree to work at a design and construction company while trying to break into television. He eventually drifted back to the Midwest, working with graphic design companies in Columbia, Missouri and Springfield, Illinois, before taking the ultimate plunge for anyone interested in working in the film/television industry – moving to Los Angeles in 2012. There, he worked at a Best Buy while picking up some temporary work on various productions, before receiving his “big break” in the form of employment as a post-production assistant during the sixth season of Pretty Little Liars.

“It is important to impress upon people the realities of moving to Los Angeles for a career ‘in the movies,’” Potter said. “You need the utmost resilience, passion, focus, and drive. You have to press on when others around you give up and move home after two or three years of ‘not making it.’ It’s a cliché, but the people who stay and keep trying are the people who eventually succeed. And I want to impress upon the fact that priorities and career paths change, and there is no shame in moving on or changing up your life.”

Seven years after beginning on Pretty Little Liars, Potter is now firmly entrenched in the industry as a Post-Production Coordinator. His job is varied, getting hired by individual shows and not always by Warner Brothers and sometimes not even on a studio lot. His biggest responsibility is to ensure that everyone on a production, including the post-production, editorial and visual effects departments, have everything they need at any given moment. That can include working with external vendors for things like processing and encoding dailies, color correction, audio mixing, and final delivery of episodes. He also handles day-to-day details like calendars, schedules, purchase orders, delivering dailies via different online streaming platforms, and searching for stock footage.

“I think what I most enjoy is scheduling and assisting with Automatic Dialogue Replacement (ADR) sessions,” said Potter. “We do that when needed if there is bad audio from production or if the showrunner wants to change a line of dialogue. It is like a giant puzzle to put together, which I love, and I also get to work directly with the cast to ensure lines are recorded correctly and on rare occasions, even get to give a little direction on the reading of those lines myself.”

Such a unique career means that Potter has regularly interacted with his share of Hollywood stars and starlets, so much so that he no longer gets, well, starry-eyed, when he does.

“I got to meet Neil DeGrasse Tyson on the set of The Orville, and he was very kind and had a great sense of humor,” Potter recalled. “I’ll never forget our exchange – I told him I was a fan, loved his work and contributions to science, and that I thought he was really cool. He looked at me and with a twinkle in his eye said ‘well, the universe is cool.’ I think that was the perfect encapsulation of Neil DeGrasse Tyson!”

“I also like to say I partied with Leonardo DiCaprio,” he said. “Though technically, I did not actually meet him, he was just 5-10 feet away from me!”

But throughout all his adventures working his way up the film and television ladder in Tinseltown, Potter has retained some of those qualities instilled in him that are invaluable in his demanding industry.

“Above anything else, it’s important to be a nice person, which goes a long way in this industry,” he said. “You should always be respectful and gracious, and be willing to learn and willing to fail and learn from your failures. Don’t be afraid to stand up for yourself or walk away from a toxic work environment. And of course, you need to be willing to work hard, over long (sometimes 10 to 14-hour days) hours.”

And for anyone who wants to follow his path for a career?

“I would advise anyone seeking to enter into a career in motion pictures/television industry to be open to just about any legitimate opportunity that crosses your path,” said Potter. “You should also take the time to visit L.A. and spend a week or two before you move there, to see if you like the vibe of the city, because Los Angeles is not for everyone.”

“Always listen to your gut, take some chances and some risks, and don’t be afraid to be a little ‘career aggressive’ and put yourself out there,” he adds. “Trust in yourself, your heart and your abilities. People will definitely notice and want to hire you.” Joshua Potter should know, because people are definitely taking notice of him these days, and on the world’s biggest entertainment stage.