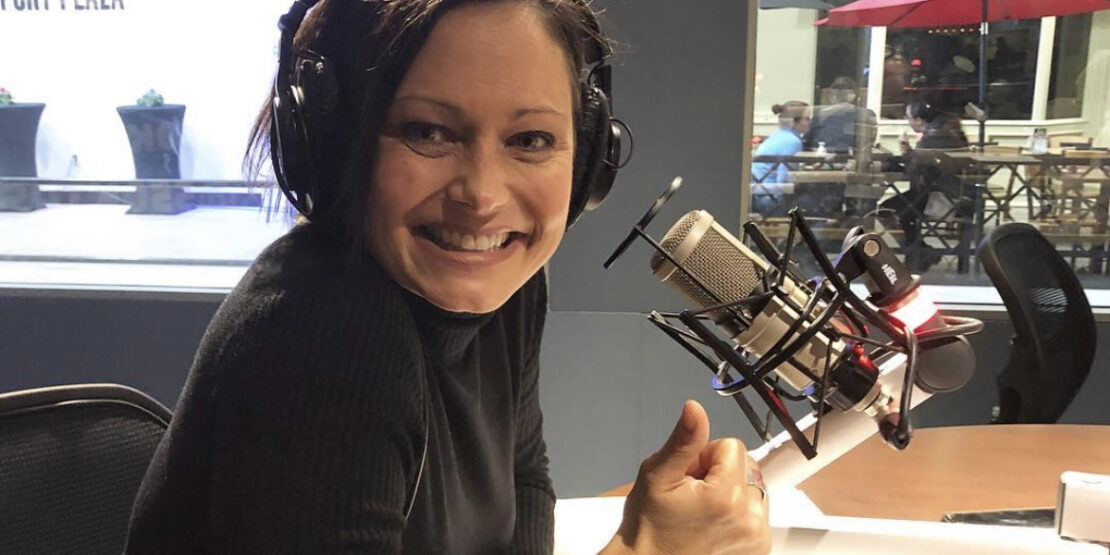 Heidi Glaus ’96 hails from the southeast Missouri town of New Madrid, best known as the namesake for the famous fault and devastating earthquake of 1812.

Turns out Glaus’ professional career since graduating from William Woods University has been pretty groundbreaking as well.

The young woman who chose to attend The Woods for the chance to play two intercollegiate sports (softball and basketball) during her college days as an Owl, and because of a unique program at WWU that promised a “foot in the door” to the television news industry, could always talk a good game. Now 25 years after leaving William Woods, Glaus is one of the most recognized and respected voices in one of the nation’s biggest media markets, serving as one of the top talk radio hosts in St. Louis on The Big 550 KTRS. And that, coming after serving as a reporter for the most prominent and high-profile television station in the market, NBC affiliate KSDK-TV, for 22 years.

She has lived the broadcast dream for her entire adult life, the one where everybody knows your name, and all that comes with it. And you better believe her passion for it burns as bright as ever.

“If you want to work in TV or radio, it has to be a passion,” Glaus said. “You have to be authentic and you have to develop a very thick skin. It’s not always a luxurious job, it’s actually working weird hours and lots of them, lugging equipment in high heels and standing on an overpass in the snow. But it has been my passion, and even in the worst moments, it’s been incredible.”

An incredible journey from small town New Madrid to big-time broadcast exposure in St. Louis – with a pleasant four-year college interlude at William Woods tucked in between.

What originally drew Glaus to WWU was the chance to play both softball and basketball (“being an all-women school at the time, we were the team that my classmates and President Barnett came out to cheer on”), the one-on-one attention she would receive from her professors, and a program that guaranteed an internship for the broadcast-minded student at KSDK-TV in St. Louis, one of the top NBC affiliates in the country.

“The opportunities I was given at WWU really laid the groundwork for my career,” she says now. “Balancing two sports, building sets for the drama department, and President’s 20 meetings taught me a certain kind of teamwork that is invaluable. The small classroom setting allowed me one on one time with professors to pick their brains. I could stop by the President’s Office and ask advice. I had the chance to work at the local radio station.”

She fondly recalls her time living at the Smith Allen Swearingen residence hall, meals in Tucker Dining Hall, basketball and softball games and road trips with great teammates, and an incredible opportunity to introduce arguably the greatest female athlete of all-time, Jackie Joyner-Kersee, when the Olympic champion spoke at William Woods.

But the biggest opportunity for Glaus was taking part in WWU’s program with the St. Louis Broadcast Center, which included the prized internship at KSDK. An internship that would dramatically alter her young life.

“I always thought I would be a sports reporter and that was the plan until a week before my internship was set to start,” she said. “I panicked, called the man in charge and told him I didn’t have a Sports Illustrated (magazine) on my coffee table, I had a People! He told me about a new show, Show Me St. Louis, which did not have an intern if I’d rather take that spot. I jumped at the opportunity and it ended up being one of the best decisions of my life.”

When her internship wrapped up, a determined Glaus continued working for the feature program unpaid for a couple of months. Eventually, she landed a paid production assistant position with another show on KSDK, the localized version of the Today show in St. Louis, which included tasks such as ripping scripts, running the TelePrompter for the anchors and getting coffee at 4:30 in the morning for the news department. That led to another position with Show Me St. Louis as an assistant producer, but her heart was set on a bigger goal: on-air reporting. To achieve that, however, would have most likely required leaving St. Louis to work in smaller television markets and climbing the ladder back up to the much bigger market.

This is when the competitive nature of a two-way collegiate athlete kicked in, and she boldly took her case right to the top.

“I asked for a meeting with the station’s general manager, gave her a tape containing the stories I had been working on and within two weeks had a new segment called ‘Young Achievers’ that aired once a week on Show Me St. Louis!” Glaus remembered. “It was an incredible experience, and helped me make my case for a full-time reporter job on the program when another reporter left. In 1998, I became a full-time reporter on Show-Me St. Louis, the first at the station to ever go from intern to reporter without ever leaving.”

Breaking On Through, To The Other Side

Her foot squarely in the door, over the next 22 years Glaus proceeded to kick it open to a variety of exciting new opportunities and challenges at KSDK. She served as a host on Show Me St. Louis for a decade, then moved on to early morning feature reporter on Today in St. Louis, where she worked with two of the best news anchors in the business, Art Holliday and Jennifer Blome, the same anchors she had run the TelePrompter for years before as a production assistant. She also got the chance to anchor the news herself, achieving the high-profile pinnacle position in television news, but decided it wasn’t for her.

“I hated (news anchoring) it,” said Glaus. “I hated reporting the sad, depressing news. I hated being trapped behind a desk. I hated having to wear boring clothes. I had to follow my heart and that was telling the stories of the good things people were doing in and around St. Louis.”

And telling those stories led to some amazing experiences. Like meeting countless St. Louisans doing incredible things, like local musicians, artists, athletes and philanthropists. Playing catch with a woman who once played in the All American Girls Baseball League, popularized in the movie “A League Of Their Own.” Driving a race car at 140 miles per hour during the Richard Petty Driving Experience. Doing the first story on The Voice band. Being an extra on the set of the TV series Superstore. Traveling to New York and Los Angeles to do stories, and interviewing the likes of Jennifer Lopez, Jon Hamm, Jimmy Fallon and Ellen Degeneres.

It was an amazing ride, but after more than two decades on it, Glaus decided to take detour in a different direction. And not surprisingly, she more than landed on her feet.

When an interesting opportunity opened up for Glaus, she jumped at it. She was asked to be co-host of a highly-rated talk show on St. Louis radio station The Big 550 KTRS for a year with Guy Phillips, in a move to gain experience in talk radio hosting with a chance to take over the afternoon drive time slot when Phillips retired. Since making the move to talk radio in 2018 she has never looked back, reaching the vast St. Louis audience the way she once did on television but in a different broadcast medium.

“Talk radio is such a different skill than hosting a TV show,” said Glaus. “There’s no script – it’s just you, a mic and guests and it is so much fun. I also have more time to really dig into things. There were such time limits in TV, not so much in radio. I get to interact with the listeners which is nice and KTRS is locally owned, so it’s more of a mom and pop place which is so refreshing.”

William Woods University13 hours ago
Hey Owls, did you know October is Breast Cancer Awareness Month? In support of the ongoing struggle, WWU is inviting everyone in the campus community to wear pink on Monday, October 3, and enjoy some delicious Honey Ice Cream from Giofre Apiaries, free of charge, at lunch and dinner at Tucker Dining Hall!