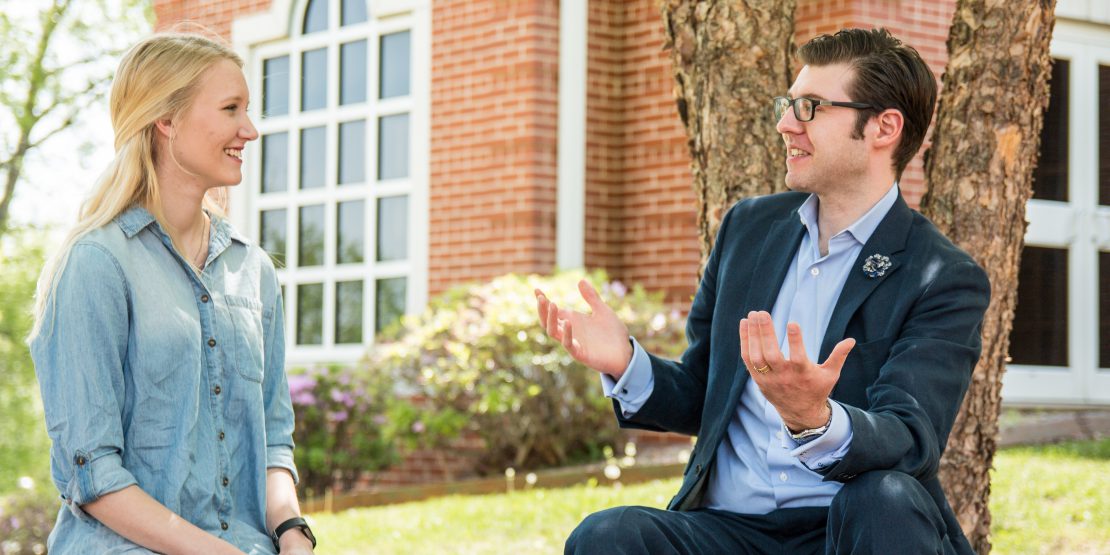 Classes at The Woods: This article series profiles interesting and unique classes at William Woods. What do students learn and why are the topics important?

The William Woods University history department recently offered a new class called Hamilton: An American Story. Students learned about Alexander Hamilton’s life, influence, and the man behind both the financial system and the award-winning musical.

Here, the professor, Dr. Craig Bruce Smith, and one of his students, Anna Blecha ’18, a Biology major from Wheeler, Ill., discuss the class.

Q: Why a class on Alexander Hamilton?

Professor Smith: Hamilton is a very popular figure right now, due to the Broadway musical. Many students told me they were interested in learning more about him, and it’s important to me to use student input to build classes. I try to teach topics that are relevant to students. Plus, my research focuses on the American Revolution, so this gave me an opportunity to share that passion with the William Woods students.

Blecha: I’ve always had an interest in early American history, but, to be honest, I signed up largely because of the musical. I didn’t know much about Hamilton before joining this class — just about his famous duel. It was so interesting to learn the backstory of his life.

Q: Why is Hamilton an important figure to study?

Blecha: Hamilton’s views and ideas shaped how America is run. Learning about his background and why he supported certain ideas and systems — that are still present today — is interesting. So many of his struggles and questions can be applied to the modern day and what we’re dealing with. If you’re interested in current events, studying these historical figures, their views, how they formed America, and what they were envisioning can definitely help you.

Professor Smith: That’s the fundamental question. You can listen to the musical, but still wonder “why should I care?” Hamilton helped build many of the foundations of our government. He helped create the Constitution, the Federalist Papers, the banking system. He has a very “American” story: An orphan who immigrates to America, goes to school, and becomes a self-made success. What’s more American than that?

Q: What was your favorite part of the class?

Blecha: Each class, we would listen to a song from the musical and then discuss it from a historical perspective, based on readings that we did. Incorporating the modern with the history was really fascinating.

I also enjoyed the research. I had to write a research paper for the class, so I looked at the female characters in the musical and how each one represented a different satisfaction (emotional, mental, physical, or financial) for Hamilton. It was a complicated idea, but, as a Biology major, I definitely have a scientific way of thinking, looking for evidence and supporting a thesis. It was hard, but interesting.

Professor Smith: Seeing how excited the students were every day was certainly a thrill. More academically, one of the key elements of history is bringing to life people that are often long dead. The further removed we are from our subjects, the more difficult this can become. Using the musical, alongside historical documents, helped to humanize the American founders, and thereby allow students to understand them as people. I had students read a biography about Hamilton, along with primary sources (his actual papers/letters), and we would discuss his role in the wider scope of early America.

Q: Why do you think this musical resonates with so many people?

Blecha: When history books talk about the founding fathers, they’re often portrayed more like gods than people. But “Hamilton” addresses their faults — the same faults that everybody has. It makes they human and more relatable.

Plus, the show is such a call to action. Once you listen to it, you’re ready to take on the world. One of the main themes is that the world is always watching, so you should act like it. It’s very empowering.

Professor Smith: During the American Revolutionary era, the founders didn’t always agree. The show does a great job of portraying this and the various sides, debates, and conflicts that shaped America. With so many themes, it allows the audience to connect with the show and its characters in more personal ways. Characters also become representative of ideas and help the audience understand them with greater clarity. Although it’s nominally about Hamilton, his ideas aren’t the only ones presented. You could leave the theater identifying more with Washington or Jefferson, or perhaps even Burr.

Q: How you think “Hamilton: An American Musical” has affected the study of American history?

Blecha: The musical has really helped develop an interest in Hamilton and the time period. As we discussed in class, there are obviously some historical discrepancies in the musical, but it has made people more aware of what happened.

Professor Smith: As a historian, I am immediately skeptical of historical adaptations in pop culture. They often get too many fundamental details wrong. But I remember listening to the music from the show for the first time (in a car with two other historians) and being shocked by how consistent it was with the basic facts. I’m not saying students should listen to the soundtrack instead of studying for a test on the American Revolution, but it does give a generally accurate sense of the subject — even if there is a fair amount of artistic license. If someone can listen to the show and walk away knowing even just a little bit more about the time period, I think it’s a good thing.

Q: How do you think your understanding of Alexander Hamilton has changed over the course of the semester?

Blecha: I don’t feel like Hamilton is a historical figure anymore. He’s more like a friend. In the beginning of the semester, I knew that he had fought a duel. Now, I feel like I’ve known him my whole life. This class made him — and the other founders — real people instead of stone carvings.

Professor Smith: One of the course objectives was to inspire historical thinking about early America, and I think we succeeded. In the beginning of the class, students were primarily interested in the musical. But as the semester went along, they became much more confident in the actual history involved. They began to have a better grasp of the historical materials and the people. They actively questioned and debated Hamilton’s motives and the principles involved, having spirited discussions.

Students found new ways of understanding both the musical and the time period.

I believe that this class helped them understand that history and the study of history can be many things. It’s not all about names, dates, and research papers. There are many effective ways of looking at the past — including a Broadway show.