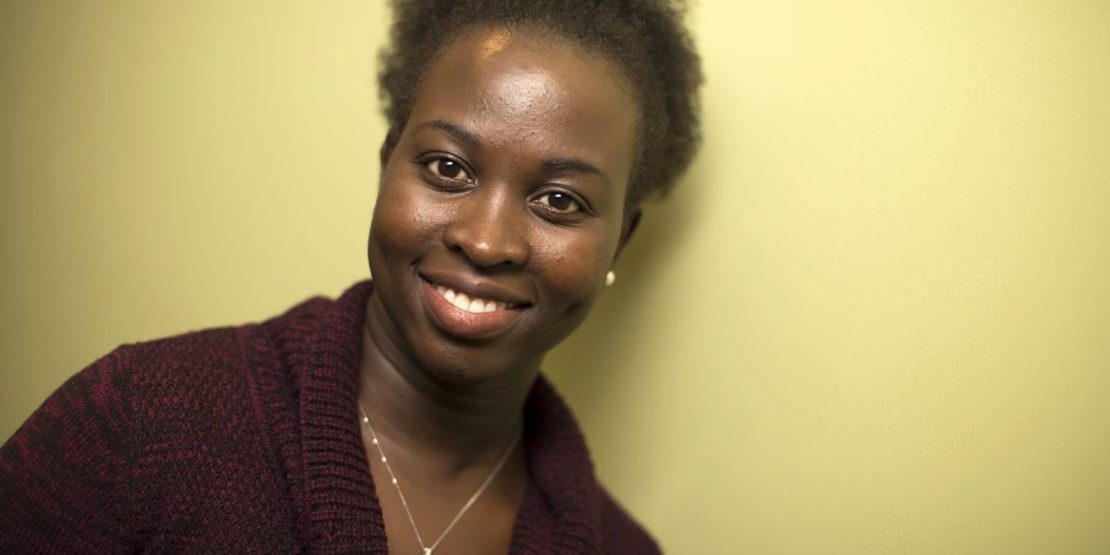 “If I can make it, I believe anyone can make it too,” Benane Awejok Akurkuch ‘06 said. “No matter the odds.”

Akurkuch today lives a peaceful, successful life in the United States, serving as a human resources director for Christian Horizons. But the journey the Sudanese native took to get where she is today was anything but peaceful. And William Woods played a role in her success.

Akurkuch’s journey began as a refugee in war-torn Sudan (modern day South Sudan, Africa) where she watched many of her family members and friends massacred during the genocide. Akurkuch and her mother tried to seek asylum by going from one refugee camp to another. She lived in various refugee camps in various countries, including two different camps in Ethiopia, two in Kenya and about a year wandering in the wilderness while trying to find a safe harbor from age three to about age 12. All her travels were done on foot, with no shoes, maps and little food. Her mother and her took their travels during nighttime, while hiding by day.

Her family eventually escaped from Africa, and emigrated to the United States. For the first time in her life, Akurkuch felt physically safe. But a whole new set of challenges remained in her new country.

Receiving a formal education at 12

Akurkuch started school without knowing a single word of English, and there was no ESL (English as Second Language) in the school at age 12.

“I was probably the first foreigner they had without a single word of English,” said Akurkuch about her new elementary school in West Haven, Connecticut.

The school was courteous and encouraging as they assigned her a counselor and a tutor who taught Akurkuch how to speak and read English. She was only in this school for a semester, but it made a mark and set the course and direction for her life in the U.S. Her family moved to Kansas City, Missouri, which would serve as a safe place for Akurkuch and her family to live in addition to finding a church family who provided support.

Running became a major factor in Akurkuch’s while settling into life in the United States. She began running as a freshman in high school to clear her mind. Cross Country taught her perseverance and to navigate the terrains and obstacles of life. She would eventually receive a cross country and track and field scholarship to William Penn University.

“I remember telling my coach that I don’t even have a penny to my name and no one in my family ever made it to high school or college,” Akurkuch said. “She was encouraging through coaching and teaching to prepare me for the next level and to not let my past determine my future.”

Her high school running coach Waunita Small made a mark in her life. Small told Akurkuch that she could get a scholarship for college if she continued improving in running and maintaining good grades during her freshman year. Akurkuch focused on maintaining good grades and improving her running abilities to ensure she earned a scholarship for college.

“The news of getting a scholarship was shocking to me –  that someone would pay for my college just for doing what I enjoy doing whether it was sport or academics,” Akurkuch said. “The race is not necessarily to the fast and the swift but rather to the determined and focused mind. Think of the finish not the start and adjust your pace accordingly.”

Akurkuch transferred to William Woods University for her senior year. WWU did not offer cross country or track until 2004, but once the running program was established, she immediately transferred to The Woods in 2005.

“WWU was on my list right out of high school,” Akurkuch said. “Being at WWU taught me how to prepare to be a professional not only in my chosen career but also in life. I learned how to build professional relationships and to live life on purpose.”

Akurkuch met wonderful people both in student body and professors. Through Professor Brenda Popp’s classes, she remembered having to work extremely hard and spend a lot of time in the library. She learned how to be accountable and responsible to her choices and actions. Popp did not take excuses, and students had to turn in the assignment before the class started.

Akurkuch was Popp’s advisee in 2005-06 and a student in several of Popp’s business classes. During one of their first advising sessions, Popp asked Akurkuch where she was from.

“She crisply replied Kansas City,” Popp said. “Hearing an international accent, I asked again, and she replied with an even crisper tone– Kansas City.  I was a bit confused because I had friends from different African countries and thought her accent was definitely from that continent.”

In Popp’s classes, Popp remembered that Akurkuch was reserved and had a sharp edge to class responses. So she invited Stanford and Ellen Nyatanga to talk to her International Business class about Robert Mugabe and the Zimbabwe political and economic crisis. Stanford walked straight over to Akurkuch and called her his African sister and gave her a big hug after the presentation.

“From hearing about the Nyatanga’s hardships and their hugs, she thawed,” Popp said. “Shortly after that presentation, she stopped by my office and opened up about the horrific events she had witnessed in the Sudan Wars.”

Akurkuch brought Popp a picture of her in her tribal Sudanese dress on one visit to Popp’s office.  On the day before her graduation, Akurkuch sat in Popp’s office and with tears rolling down her face, a memory that Popp has never forgotten.

“Benane said, ‘I never thought that the little girl going from refugee camp to refugee camp would ever walk across the stage of WWU,’” Popp said.

The two would lose touch for years after graduation, until Popp received a message from Akurkuch through LinkedIn in 2019.

“I was overjoyed to hear from her,” Popp said. “This time is was me with tears rolling down my face, just hearing from her and knowing she was doing well. I thought of her and worried that life would throw her more difficulties and she would not have the safety net to withstand them.”

But when WWU challenged Akurkuch in a positive direction in terms of academics through Popp’s classes, it set her up for success in America and in life. She remembers in particular one occasion, when she spent 10 hours in the library during finals week studying specifically for corporate finance final, an exercise that helped her to learn how to think critically, use her time wisely, and to be prepared for the task at hand.

“I wish I was there for the whole four years, but I am grateful for the year and half I was at WWU because I was very challenged in a positive direction in terms of academics,” Akurkuch said.

And more than a decade after William Woods helped transform a young woman who survived a childhood being shuttled between refugee camps amongst an ongoing civil war in an African nation into a confident, successful individual, Akurkuch is beholden to all who helped her along the way.

“I am thankful for those individuals that I have met in my life thus far who helped propelled me beyond my circumstances,” Akurkuch said. “My journey taught me how to be flexible and adaptable to whatever environment I am in and to expect the best. I can be courageous to overcome any obstacle that I may encounter.”