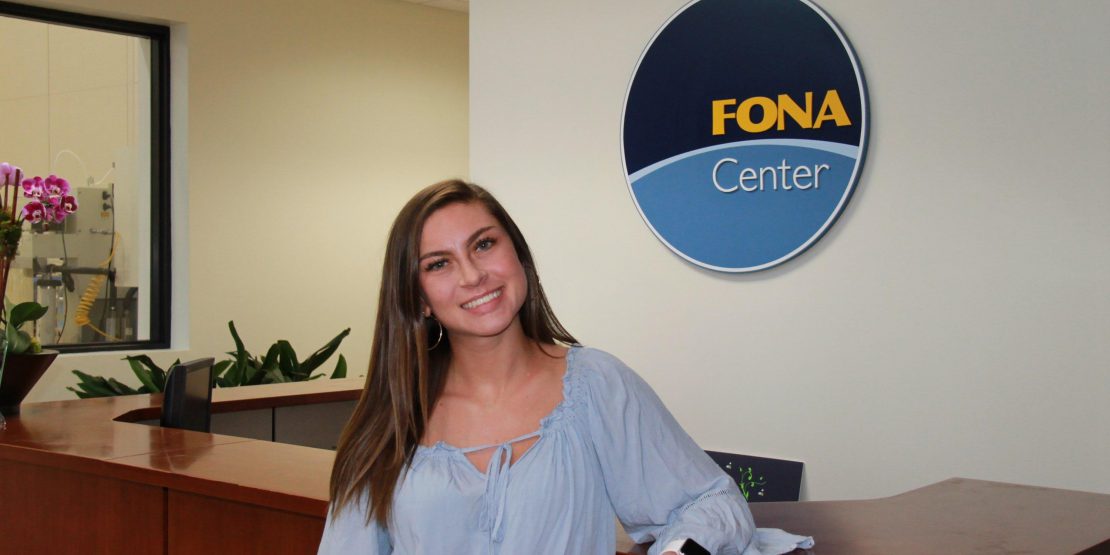 At William Woods, students receive education both inside and outside the classroom that prepare them to succeed in the real world. Recently, The Woods Today’s Veronica Townsend caught up with three students who gained valuable professional world experience through another opportunity at The Woods – high-profile internships.

A Washington, D.C. law firm, a Food Flavor Company in Illinois, and a Colorado Aquarium are examples where three WWU students found fascinating opportunities in the past year, all helping them prepare for their careers after WWU.

Internship: Wilkinson Barker Knauer LLP, one of the top Telecommunications law firms in the U.S., in Washington, D.C. over the summer ‘19.

Attending a Board of Trustees meeting during his freshman year, George formed a business connection with board member, Bryan Tramont. Tramont mentioned that he was looking for a WWU student to come work at his firm, where he is the Managing Partner. George and Tramont continued this conversation again at the same event during his sophomore and junior years. George applied, and eventually, was hired.

“My advice would be to take the opportunity,” George said. “The internship I did was one I knew about for almost two years before I was able to capitalize on it.”

The internship was not an easy move for George, who was nervous to move across the country for an entire summer. At his location in Washington, he worked with a firm full of brilliant lawyers who year in and year outperformed the best in their field. On top of that, George had never worked at any kind of law firm before.

“However, I took that leap of faith and gained the experience of a lifetime that very well may be incredibly impactful on my future,” George said. “So simply, my advice is to take that leap. It’s scary, and it’s a big move towards your future, but even if it’s one that is more local or familiar, take advantage. The experience you’ll gain and the people you’ll meet may change your life.”

The best part of the internship for George was the experiences he had, both at work and touring the Washington, D.C. area, which he had never been to before. George also went to New York City and Philadelphia to sightsee as well.

An important item to carry in Washington, D.C. was his Metro card because it was the easiest and most cost-effective way to transit across the different parts of the city.

“I was able to see a lot of historically and culturally significant things, as well as work with and meet many great lawyers and government officials in my time there,” George said. “The only downside was not being home to watch the Blues win the Stanley Cup, but it was another awesome moment while I was out in D.C.”

Madde Klinkey ’21 found FONA International following the company’s donation of a basket at a charity auction for a local animal shelter.  The company had a tasting experience at their lab where her parents had the opportunity to make a flavored potato chip, drink, and other food items.

Touring the plant helped Klinkey to see the fantastic perks of the company, which creates and produces flavors for some of the largest food, beverage and nutritional companies in the world. The program director gave her mom the information for the internship. The internship information was passed on to Klinkey, who applied. After a phone interview, she was selected, along with 11 others, from a pool of over 100 applicants.

“Every time you leave your home, you have the opportunity to make a good impression,” Klinkey said. “You never know who you will meet. Always have a positive attitude and put your best foot forward. Working hard to complete a task to the best of your ability is always to your advantage.”

The best part of Klinkey’s internship was learning about the food industry.

“Being surrounded by flavorists and food scientists gave me the opportunity to learn something new every day and kept me open-minded,” Klinkey said. “I now have a grasp of what it means to work in the food industry and specifically flavor chemistry with company sales.”

Klinkey returned as a temp full-time over winter break in the same department and plans to return this summer as well.

As an Animal Ambassador Trainer Intern at the Denver Downtown Aquarium, Isabel Storey ’21 participated in daily cleaning and food preparation. Storey had a hands-on training experience with some of the animals as well as presenting them on their public walks, weekend shows, animal encounter programs, and public exhibit chats. Storey applied for her internship on the Association of Zoos and Aquariums (AZA) job post board.

“Do it,” Storey said. “Depending on your field there may be opportunities you never thought you would get to have just by going out of state. There can also be financial barriers because none of my internships has ever been paid. However, they are worth the experience and connections you can make.”

The items that Storey brought with her were a reusable water bottle and granola bars. She brought a lot of activewear and khakis.

“I knew I would want to explore Colorado’s nature,” Storey said. “I focused on clothing pieces that could go from my internship to the trails to a “nice” lunch with family. I tried to be as minimalistic and multifunctional as possible.”

Storey encourages people to apply for any and all internships readers find interesting and enriching to their professional and personal goals.

George, Klinkey, and Storey are three examples of the endless possibilities that the various internship programs at WWU provides to the students. The internship class is an option for upperclassmen to select for their programs. Students can now explore the benefits of internships with discussing the possibilities with their professor. For more on WWU internships, please visit: https://www.williamwoods.edu/academics/undergraduate/programs_and_degrees/business/internships.html