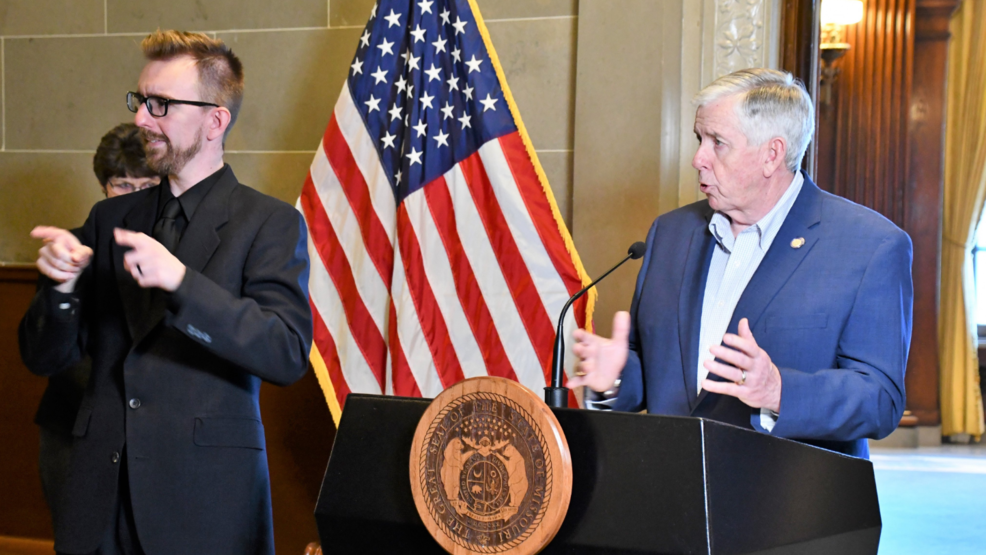 For citizens of Missouri, it has been a familiar ritual during these past months of the global pandemic. Each weekday afternoon, Missouri Governor Mike Parson, along with other state health officials, holds a briefing for members of the local and state news media about the state government’s response to COVID-19. During some of the pandemic’s most harrowing days, the briefing was frequently shown across the state on live television.

And for the majority of the Governor’s briefings from the State Capitol in Jefferson City, standing right beside him to ensure that the state’s hearing impaired citizens also receive the most timely information about the pandemic, have been alumni interpreters from William Woods University.

Each government media briefing during the pandemic in Missouri is accompanied by a skilled interpreter wearing an all-black outfit with a face shield, while signing to the Deaf community. For William Woods, that has meant a high-profile role for Jessica Brown and AJ Housewright.

Brown is a Certified Deaf Interpreter and an Instructor at WWU. Interpreting during the briefings at the Capital during the COVID-19 pandemic next to Governor Parson is where one can now frequently find her.

“Interpreting during the briefings at the Capitol is stressful at sometimes, but it’s part of my job and I feel that I handle it well,” Brown said. “Live performance is simultaneous and there is a small window of errors that could happen, I make sure my team is placed where I am able to fluidly interpret and still receive information that I would need to correct.”

Brown does a pre-conference meeting with her team and watches the previous news from the night before and the daily press release post on Facebook to prepare. She is grateful about how her WWU education prepared her for this very visible role.

“William Woods has helped me in interpreting in government settings as I sat in several Advanced Settings interpreting classes while attending as a student, and it gave me some insight on context, vocabulary sign choices as well as register,” she said.

Brown’s current Williams Woods students benefit, as well. They get to see the Certified Deaf Interpreter’s work which helps broaden their education. It also trains them, if and when they team with a Deaf interpreter, about how to work with them.

A member of Brown’s team is A.J. Housewright ‘15. This was a new experience for Housewright, as he did not have the opportunity to team with a Certified Deaf Interpreter before this assignment.

“Whenever people ask me why they don’t see me on camera, I’m happy to explain that I’ve transitioned to a role behind the camera,” Housewright said. “Having Jessica [Brown] as a team member has helped quite a bit with preparation, since I’m able to talk with her before and after the assignment to do quick research on what’s slated for discussion that day, brainstorm how to present concepts, and ultimately to just make the overall interpretation better.”

Housewright believes The Woods helped him in his current role by providing a variety of experiences in and out of the classroom that forced him out of his comfort zone. So now, he has been able to seamlessly transition to interpreting during the COVID-19 pandemic in front of an army of news media, including sometimes on live television.

“The biggest challenge in getting ready for a briefing is the preparation itself,” Housewright said. “Information changes so quickly that you really have to try to keep up with what’s going on in the news before you get to the assignment. Even if you get some talking points ahead of time, someone may ask a question that could lead to another topic that wasn’t intended to be covered during the briefing.”

Watching her former students interpret at the State Capitol has been highly satisfying for William Woods American Sign Language (ASL) Professor Carrie McCray. The ASL program uses this year’s news and current events examples, as well as past elections and presidential speeches, to break down the language used and talk about the register of the speech, so that her classes can then talk about what signs are appropriate for the setting.

“Watching AJ [Housewright] and Jessica [Brown] interpreting for the Governor’s briefings gives me a great sense of pride,” McCray said. “Any time I see one of my former students interpreting and doing it effectively, especially in this case when it is in such a high-profile situation, it reinforces why I chose to teach interpreting at William Woods.”

Each day during the pandemic, the sight of successful alumni interpreters from WWU working side by side with the state’s governor in such a public way reinforces the idea that for graduates of the William Woods ASL program, the career possibilities are endless. That is because

few institutions compete with William Woods in ASL education, which is frequently ranked among the best ASL programs in the nation.

Find out more at: https://www.williamwoods.edu/academics/undergraduate/programs_and_degrees/asl/bachelors_interpretation_studies.html

William Woods University5 hours ago
After a year’s hiatus due to COVID-19, one of the University’s cherished historical traditions - Alumni Weekend – will return this spring!

William Woods announces virtual Alumni Weekend events | William Woods News
One of the most anticipated traditions at William Woods University (WWU) is set to make its comeback this April – with a nod to the health and safety of all participants. Following the cancellation in
news.williamwoods.edu
20    View on Facebook

Do you know someone who would be a great Graduate and Online Admissions Counselor?

William Woods University1 day ago
The 2020-2021 MainStage Season Series at The Woods will continue this week with the third of four stage productions for this current academic year.

William Woods University2 days ago
In honor of Black History Month, The Woods is profiling some of its newest African-American faculty and staff. Today we meet Angelette Prichett, Associate Dean of Academic Student Services and instructor of Social Work, who joined WWU last November.
https://news.williamwoods.edu/five-questions-with-angelette-prichett-associate-dean-of-academic-student-services-and-instructor-of-social-work/

Five Questions with Angelette Prichett- Associate Dean of Academic Student Services and Instructor of Social Work | William Woods News
To mark Black History Month, The Woods Today is spotlighting our newest African American faculty and staff, with each profile in their own words as told to Veronica Townsend. William Woods University
news.williamwoods.edu
74    View on Facebook

William Woods University5 days ago
Be sure to check out our behind-the-scenes video tour of the new WWU Center for Equine Medicine! The facility is AMAZING and we are so excited to share it with you via video (and hopefully, in person very soon!) Our heartfelt thanks to WWU student- Lauren Lanum, member of Student Alumni Council- Class of 2022, who volunteered to put this video together for our 2nd Annual Equestrian Alumni Weekend that kicked off last night!

It’s not too late to register and attend the virtual events happening tonight and this weekend! Contact Jeneva in the WWU alumni office at 573-592-4237 or email at Jeneva.Pace@WilliamWoods.edu for details.

virtual tour
This is "virtual tour" by William Woods University on Vimeo, the home for high quality videos and the people who love them.
vimeo.com
20    View on Facebook
×