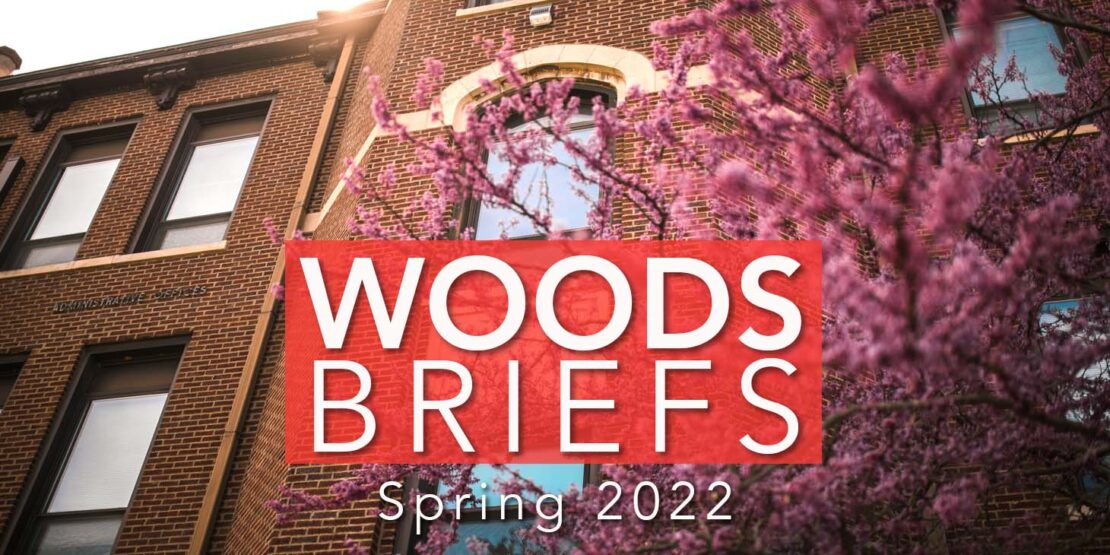 News and notes about William Woods students, faculty, staff, and alumni. Updated continuously throughout the semester.

Walter Renaud, an English professor at William Woods for more than 30 years, died December 16, 2021 at his home in Charleston, Illinois. He was 90. Mr. Renaud began teaching at WWU in 1975 and was named professor emeritus in 2004. In addition to teaching English classes, he also taught film classes at The Woods, and also served as a visiting professor at Nagoya Women’s College in Japan. Professor Renaud received the University’s Distinguished Professor Award in 1982 and 1998, and won the 1998 Governor’s Award for Excellence in Teaching. His wife of 63 years, Helen (Cane) Renaud, who survives at the home, worked for more than 25 years at Dulany Library at WWU, and together they attended numerous seminars across the country for the National Endowment for the Humanities through the years. Professor Renaud was active with the local public libraries, serving on the executive board for the Friends of the Callaway County Library and as secretary of the Foundation Board for the Daniel Boone Regional Library in Columbia. A native of Massachusetts, Professor Renaud earned the Combat Infantry Badge and the Korean Service Medal with two Bronze Service Stars during his U.S. Army service in the Korean War. Using the G.I. Bill, he graduated from the University of Massachusetts-Amherst and later earned a fellowship to Harvard University, where he received a master’s and a doctorate in English/American Literature. In addition to his wife, Mr. Renaud is survived by a sister, one daughter, one granddaughter, and one great-grandson.

Dr. Frank Guiseffi, Assistant Professor of Education, has published a new book – “Socratic Moments: How The Socratic Method Engenders Authentic Educational Encounters.” The book offers educators theoretical and practical ways to implement the Socratic  Method in educational settings. A member of the WWU faculty since 2020, Dr. Guiseffi’s book was published by Lexington Books.

Natalie Turner ’94, of Chesterfield, passed away on February 6, 2022, after a long illness. A member of the Alpha Phi Sorority during her time at The Woods, she worked as an elementary school teacher before she was forced to stop due to health reasons.

Ciara Tatum ’19 was awarded the “Coach Of The Year” at the first-ever Black Excellence Awards Ceremony on December 26, 2021 in Columbia, an event sponsored by The Village, an organization with a mission to aid and assist Black people in the Columbia area. Tatum, the Head Track and Field Sprint Coach at Battle High School and physical education teacher at Lange Middle School, both located in Columbia, was recently featured in the 2021 edition of the WWU alumni magazine The Woods (pages 76-77): https://news.williamwoods.edu/alumni-magazine-2021/

Karyna Sagalai ’21 and her husband started a business called Smoothie Cards, and launched their first product on Kickstarter. Smoothie Cards is a box of 40 great-tasting recipes that also have health facts and the full nutritional breakdown for each recipe. You can learn more about Smoothie Cards and their Kickstarter here: http://kck.st/3euXmPi

TJ Quick ’09 and ’11, of Fulton, Mo., was recently named the Northeast New Principal of the Year for 2022 by the Missouri Association of Elementary School Principals (MAESP). She is one of just 10 principals across the state of Missouri to receive this annual award. Quick is the principal at Bartley Elementary School in Fulton.

Amanda Herriman-Reichel ’11 and ’13, of California, Missouri, recently published her first-ever book – “My Word Of The Year,” an inspirational goal-setting story. Herriman-Reichel is a third grade teacher for the Moniteau County School System, wife, mom and aspiring artist. Read more about her here: https://news.williamwoods.edu/alumni-you-should-know-amanda-herriman-reichel-09-11-and-13-wwu-legacy-educator-and-author-california-missouri/

Jenny Stracke ’09, of Las Vegas, is the Director of Marketing for Corro (https://corroshop.com), an online one-stop store for a wide variety of Equestrian products, from stable to saddle and polo wraps to fly spray. Read more about Stracke and her cutting edge new company here: https://news.williamwoods.edu/wwu-alum-a-vital-cog-at-cutting-edge-digital-first-equestrian-commerce-store-start-up/

Philip Guidry ’10, head Cross Country and Track and Field coach at Westgate High School in New Iberia, Louisiana, coached his team to its second consecutive Class 4A state track title on May 10, 2022. Guidry ran cross country and outdoor track at WWU from 2007-2010, being part of the team that won the American Midwest Conference Cross Country Championship in 2007. Guidry was profiled for The Woods Today in 2021: https://news.williamwoods.edu/alumni-you-should-know-philip-guidry-10-head-cross-country-track-and-field-coach-and-physical-education-teacher-westgate-high-school-new-iberia-louisiana/