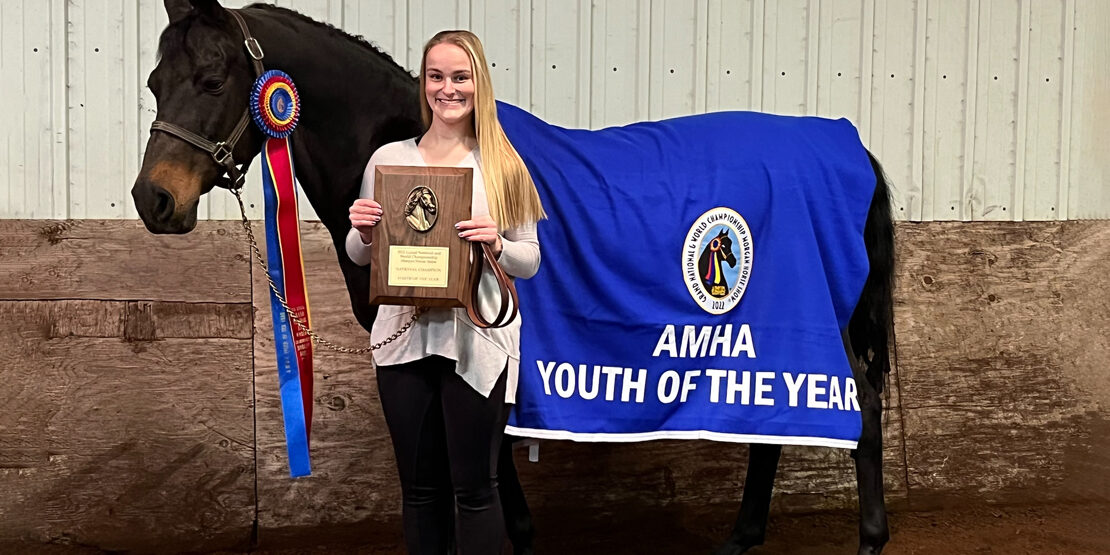 The Mount Horeb, Wisconsin native and aspiring equine veterinarian was awarded as the “Youth of the Year” by the American Morgan Horse Association (AMHA), one of the oldest equine organizations in the U.S., during the Morgan Grand National and World Championship Horse Show in Oklahoma City, Oklahoma. Freitag won the prestigious honor over contestants from all over the nation during the show which ran from October 8 through the 15th.

“Winning this award means so much to me,” said Freitag. “The Morgan breed has had such a significant impact on my life growing up. I am looking forward to continuing my involvement and promoting this outstanding breed and its countless opportunities. I truly would not be where I am today without the Morgan horse. This is an amazing breed with an amazing community and I am so thankful to be a part of it.”

Founded in 1909 to support the Morgan breed, the American Morgan Horse Association exists to preserve, promote and perpetuate the approximately 90,000 living Morgan horses in the U.S. Located in Lexington, Kentucky, the AMHA carries out administration, promotion and education for the benefit of its approximately 7,000 active members and the breed.

The AMHA Youth of the Year award rewards those who are well-versed in horsemanship skills. The contest consists of a rigorous four-part exam over the course of two days. Included are a written exam, an oral presentation and interview, a ridden or driven horsemanship pattern, and a judging division with a reasons portion.

“Jordan’s dedication and abilities in horsemanship, equestrian knowledge and public speaking paid off in spectacular fashion at Morgan Grand Nationals as she was named Morgan Youth of the Year,” said Jennie Petterson, Dean of Equestrian Studies at WWU.  “Our equestrian students are on their way to becoming leaders and mentors in the equine industry and Jordan has made an impressive start.”

A student in the WWU Biology (Pre-Vet) program, Freitag plans to become an equine veterinarian while working with the Morgan breed.

“I will always be involved in the Morgan breed with breeding and showing, and this award will help me accomplish my goals.”