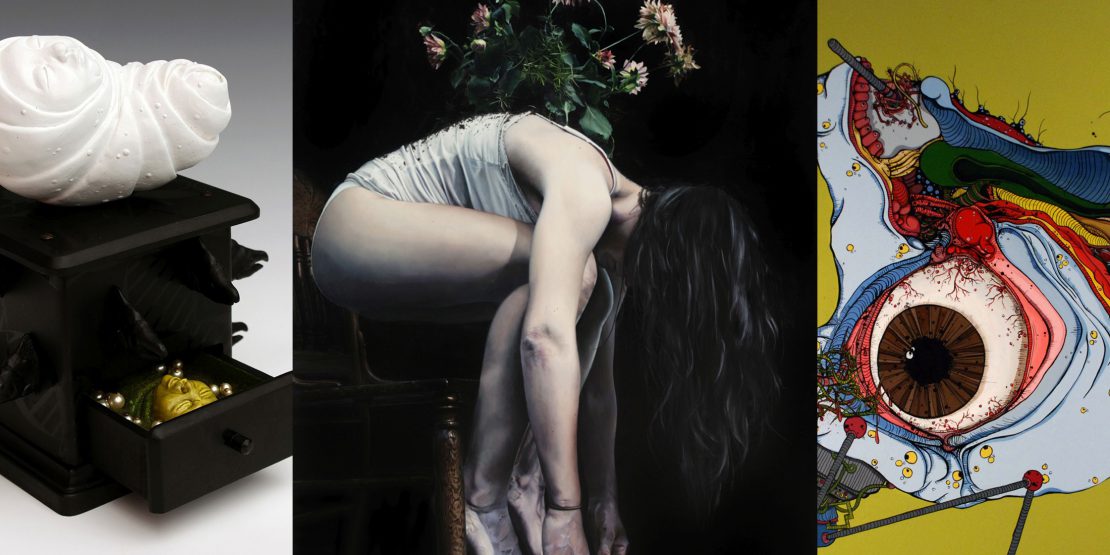 A thought-provoking art exhibit that focuses on the artists’ portrayal of the sins of humanity is coming to William Woods University (WWU).

“Sin Eaters,” featuring the work of eight Illinois-based artists who address difficult topics such as horror, evil and shame through their creative works, will run on the WWU campus for four weeks beginning January 9 at the Mildred Cox Gallery. Admission to Cox Gallery is free.

“Sin Eaters” gets its name from a ritual in some sects of early Christianity. It refers to members of communities whose sole function was to take on the sins of others. Families of the newly deceased would hire a Sin Eater to perform a ritual in which a simple meal of food and drink would be consumed by the Sin Eater, symbolically transferring the dead person’s transgressions to the Sin Eater.

Similarly, artists in the Sin Eaters group see themselves as willingly taking the burden of society’s sins, be they horror, evil or shame, and transforming those transgressions into something palatable for the public through their art. The work of the group, though diverse, will create an environment that touches upon the sins that are known, carried, and also often hidden in an age where so much is commonly on display and publicized.

The Sin Eaters exhibit will be on display at the Cox Gallery in the Gladys Woods Kemper Center for the Arts on the William Woods campus. The show will run from Tuesday, January 9 until Monday, February 5, with an opening reception on Wednesday, January 10 from 4-6 p.m.