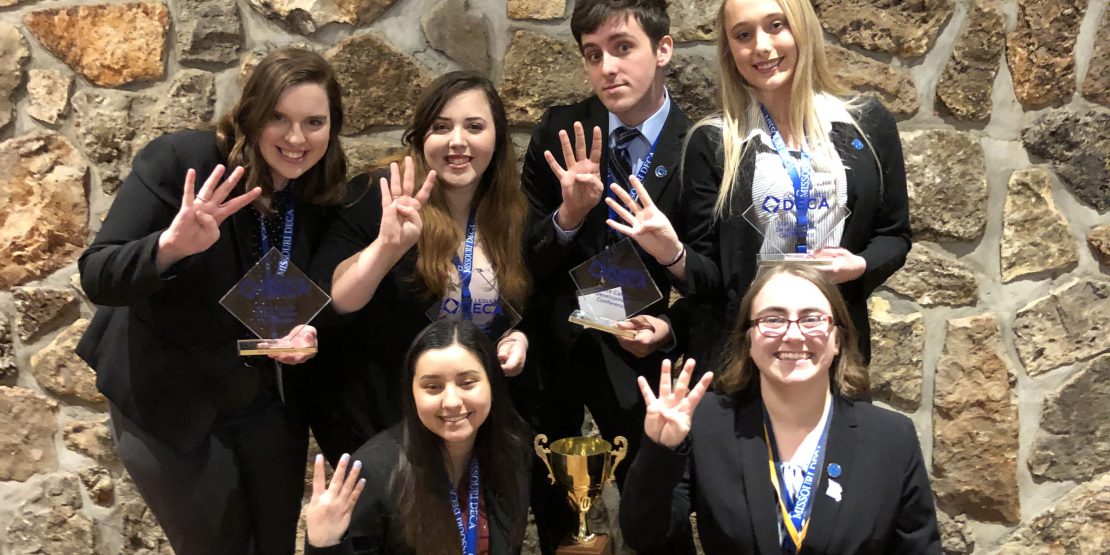 Fulton, MO – It might be time to call it what it is – a dynasty!

For the first time, a Missouri university has been named state Collegiate DECA Chapter of the Year for four consecutive years, and that institution is William Woods University (WWU). The WWU team once again claimed the honor at the Missouri Collegiate DECA annual conference, which took place February 27 and 28 in Lake Ozark, becoming the first school ever to win the prestigious award four years in a row.

“Having William Woods named DECA Collegiate Chapter of the Year for the fourth consecutive year, beating out teams from much larger universities in the process, is pretty remarkable,” said David Forster, Associate Professor of Business and Economics and DECA advisor at WWU. “Our success illustrates not only the outstanding quality of students we have, but also the exciting opportunities possible for someone who decides to attend The Woods.”

The WWU victory was highlighted by the duo of Meredith Aguado ’22 and Jade Schmedding ’22 winning the Event Planning competition; Ben Schmiemeier ’21 placing second and Elizabeth Tamborski ’22 third in the Human Resource Management event, and WWU finishing third out of 11 teams in the Trivia Bowl.

Graduate student Nina McKee ’19 was also honored with a special award for excellence in the Business and Management exam. Also representing WWU at the competition was Stephanie Almazan ’23.