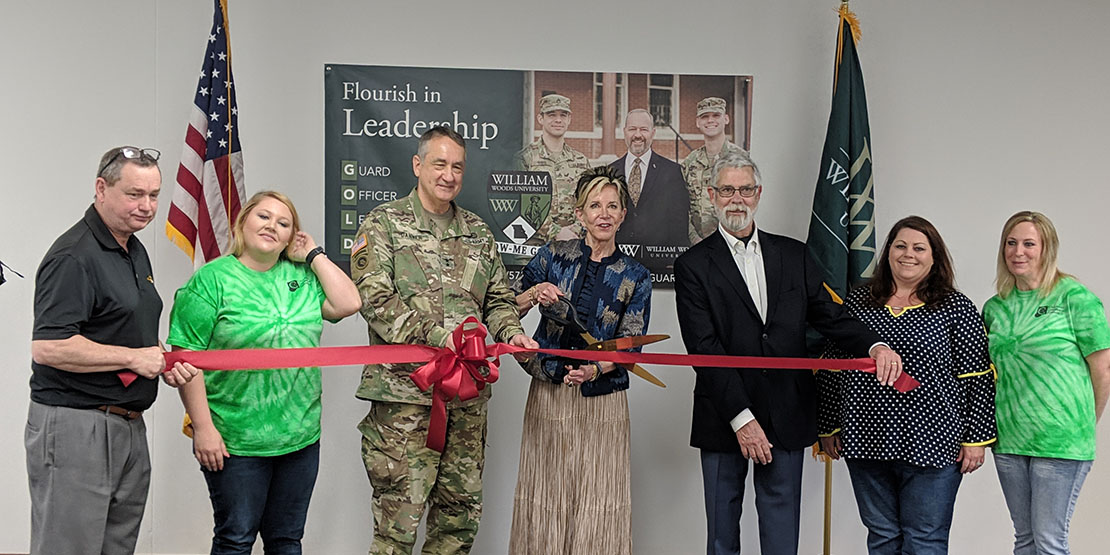 Fulton, MO – William Woods University (WWU) President Jahnae H. Barnett joined Major General Stephen Danner, Adjutant General of the Missouri Army National Guard, and local and university leaders in a ribbon cutting ceremony today for the on-campus headquarters of the Show-Me Guard Officer Leadership Development (GOLD) program at WWU. The university announced the launch of the GOLD program, which is designed to provide a pathway for individuals interested in becoming officers in the Missouri Army National Guard (MOARNG), in August 2018.

The first 12 students enrolled in the GOLD program at William Woods will begin classes in August during the Fall 2019 semester.

“Establishing the headquarters for the GOLD program at William Woods is the next milestone in our new partnership with the Missouri Army National Guard,” said President Barnett. “We are excited to begin offering the program this fall, and have already exceed expectations on the number of students enrolled in the program for its first year.”

“We look forward to the start of the Show-Me GOLD program here at William Woods, which will provide scholarships and a variety of educational opportunities for our citizen-soldiers,” said Major General Danner. “We are confident of the future success of the GOLD program with WWU, an outstanding military-friendly institution, as our partner.”

Show-Me GOLD prepares candidates for the rigors and challenges they will face as commissioned officers in the Army National Guard. To be eligible, students must be a member of the Missouri Army National Guard and accepted to enroll at William Woods. Participants will attend Military Science classes during their freshman, sophomore and junior years at WWU, and attend an accelerated Officer Candidate School during the summer between their junior and senior years. When students graduate from William Woods, they will have a Bachelor’s Degree in their respective academic discipline, a Minor in Military Science and be commissioned officers in the MOARNG.

Admin Notice: Error, Please check that you have entered your Twitter API token information correctly on the Twitter Options page of Feed Them Social.

Meet #senior Connor Poulson @cwp06. Connor is a #scholar, #peertutor in #math and #physics, and a #studentathlete on the #baseball team.

Consider this a #ghostly reminder...
#facecoverings are required #oncampus at #WilliamWoodsUniversity!

#Staysafe and be #frightfully good boys and #ghouls - #wearyourmask 😷

Mark you calendar for the inaugural #OWLoween at William Woods University! Hosted by the Greek Community and @WilliamWoodsUniversityStudentLife

Get ready for #OWloween at #WilliamWoodsU - a #drivethru #trickortreat hosted by WWU Panhellenic Association and #WWUIFC. Our #Greekcommunity invites you to #wearyourmask, drive-thru campus to receive some #treats...