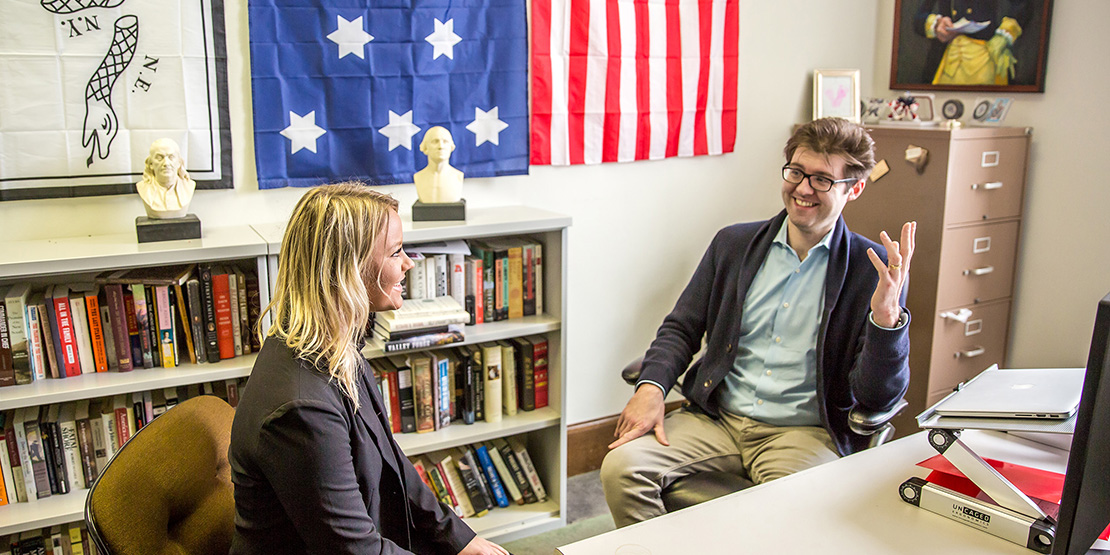 Fulton, MO– A lecture by a member of the William Woods University (WWU) History faculty focusing on the American army during the Revolutionary War is set to receive national exposure.

Entitled “The Continental Army,” the lecture by Dr. Craig Bruce Smith, director of the History Department at William Woods University, will be shown on C-Span 3 American History TV as part of the network’s “Lectures in History” series. It will air on Saturday, June 29 at 7 p.m. CST.

The lecture was filmed at William Woods on March 19 of this year as part of Dr. Smith’s “History of War” course, which examines military history and the impact of war on society from the ancient world through the modern day. The filming also includes William Woods students asking questions and interacting during Dr. Smith’s lecture. A preview can be found here:  https://www.youtube.com/watch?v=VdHs4fY1I3c&feature=youtu.be

“The Continental Army” lecture focuses on the American Revolution and the development of the American army, which was comprised of citizens fighting for liberty and freedom rather than for conquest, profit or at the whims of a monarch. It explores such figures as George Washington, Horatio Gates, Charles Lee, Benedict Arnold and many more, including the evolution of the role of the common soldier.

“The formation of the Continental Army is a crucial moment in the history of war, because it represents perhaps the first fighting force based on shared ideology and ethics,” said Dr. Smith. “This was an army who desired to serve the nation and the greater good of its people as opposed to centuries of war conducted solely for the interest of monarchs.”

A member of the William Woods faculty since 2016, Dr. Smith is the author of American Honor: The Creation of the Nation’s ideals during the Revolutionary Era, published in 2018.

William Woods welcomed a new Vice President of Enrollment Services last month, as Dr. Andy Otto joined the University with more than a decade of experience in higher education admissions and enrollment leadership roles. He recently sat down to answer Five Questions for The Woods Today, as told to Jo...
29 1    View on Facebook