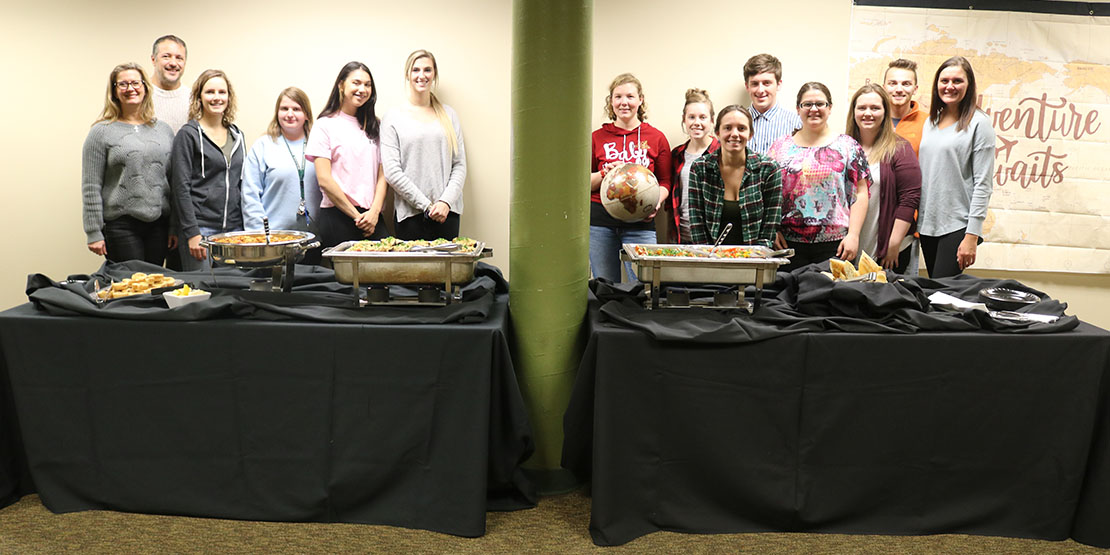 After the passing of celebrity chef, author and travel documentarian Anthony Bourdain on June 8th, 2018, Travis Tamerius was saddened. But also inspired.

As Director for the Center of Ethics and Global Studies at William Woods, Tamerius regularly leads students abroad to experience new cultures as part of the university’s Woods Around The World Program. But the death of Bourdain prompted a new idea – how about a way to help WWU students explore the world from the comforts of campus? With the words of Rudyard Kipling in mind (“The first condition of understanding a foreign country is to smell it”) Tamerius created The World Supper Club at William Woods.

The World Supper Club allows students to taste the cuisine of other world cultures, through a series of themed dinners held on campus throughout the past academic year. The final World Supper Club of this semester was on April 18, featuring Japan.

“I think that the mark of a good education is that you become interested in a story other than your own,” said Tamerius. “I think being able to travel is one of the best ways to do that. Then with Anthony Bourdain’s death last summer it spread awareness about other cultures and their food through his popular shows. I really appreciated his interest in people and his boldness to try anything once.”

Tamerius’ goal was to make students interested in other people’s lives, to learn about different cultures, and to experience a piece of another culture. Watching clips of Bourdain’s travels during the meetings of the Supper Club, allows students to in effect meet some of the locals through his programs.

“I think this is a great idea for students who do not have the means to travel, or are nervous to travel,” said Leah Easley ’22. “It’s a nice way to dip your toe in the water.”

“In the New Orleans dinner, it felt like we were right there with them during the crawfish boil on Anthony Bourdain’s clip,” said Megan Tolias ’19.

This semester students experienced six dinners: Spain and Portugal together, India, Cuba, Argentina, New Orleans, and Japan. Tamerius plans to continue the program, maybe with a twist, in the coming years. There are so many other international cuisines to try, but also cuisines from different areas of the United States.

“I have been to all of the suppers except for Cuba,” said Tolias. “I wanted to go to these because it’s another cultural experience I can get. It’s the closest you can get to exploring another culture without spending money on a trip.”

Twelve students can attend each dinner.

“I wanted to keep the group small enough that a conversation could be had across the whole table, rather than segmented conversations going on in different parts of the group. I wanted students to be able to learn from one another’s experiences,” said Tamerius.

Some believe that family dinners have become a thing of the past. The World Supper Club allows students to put away technology and devices and focus on their current company, which is another benefit of keeping the group small.

Thus far, the focus has been on cuisines students have tried through Woods Around the World, which gives students the ability to learn from another student who has visited the country they are learning about that evening. Future programs could involve cuisines from places Woods Around the World has not travelled, or even an American version with food from different regions.

Each supper concludes with the students having a discussion about what they’ve experienced.

“We will talk about where we have travelled before, and we can learn from students who have gone on a Woods Around the World trip to that area to see a new perspective,” said Tamerius. “Even the New Orleans one was so interesting because it’s still in the United States but so different than the way many of us eat.”

“A lot of people historically have learned through sitting at a table with friends and strangers. I think this is a great model for students to learn together and from each other.”

William Woods University2 hours ago
Proud to see one of William Woods’ own, Board of Trustees member Maj. Gen. Byron S. Bagby, chosen to serve as Grand Marshall for this year’s Independence Day Parade in Fulton!
https://www.fultonsun.com/news/local/story/2021/jun/18/independence-day-parade-to-feature-bagby-as-grand-marshal/875446/?utm_medium=social&utm_source=facebook_Fulton_Sun&fbclid=IwAR2NNZ6Aa_aAQ1vzXk487thY77PZq3TtKAonn0rBETxGFkMb6Pj7PN7dqtU

This year's Independence Day Parade in Fulton is scheduled for 2 p.m. Sunday, July 4.
4    View on Facebook

William Woods University3 days ago
While many schools are reopening post-COVID, students are still going to be impacted by the pandemic. Educators will need to deal with learning loss and educational inequality to help get students back on track. https://bit.ly/3cTqrUl

With schools reopening post-COVID, how will educators deal with the learning loss and educational inequality resulting from the pandemic? They will need strategies and resources to close the gap and get students back on track.
6    View on Facebook

William Woods University4 days ago
University IT is just one of the departments hiring right now at William Woods. Check out our UIT Office Manager role, as well as other staff, coaching and academic positions with a 150-year leader in higher education. https://www.williamwoods.edu/employment/