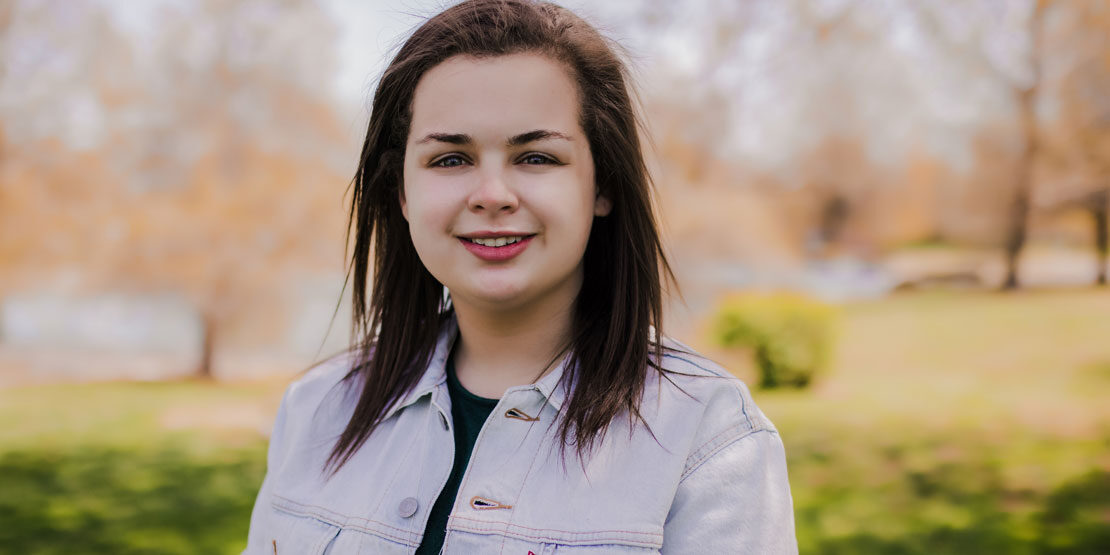 For most college graduates, it takes a lifetime of working to realize their professional dream job.

Veronica Townsend ’21, who graduated from William Woods just 11 months ago with a Bachelor’s in Communication, is already well on the road to achieving her dreams.

A current graduate student at the University of Missouri (Columbia)’s famed School of Journalism, Townsend recently won a coveted summer internship slot with the most famous sports cable network in the world, ESPN. While growing up in Jefferson City, working as a sports anchor/reporter for the “Worldwide Leader In Sports” was always her dream career. Now, she will have her foot firmly planted in the legendary network’s door.

“Last Tuesday, it was 2 a.m. when I received the message that I was getting the internship,” Townsend said. “Happy tears rolled down my eyes because the first step of my mission was accomplished, which is getting a job at ESPN. This is a goal I have worked on my entire life. I am humbled and grateful ESPN executives believe I can do a great job.”

No less than Forbes Magazine has regularly ranked ESPN’s internship program as one of its “Top 20 Most Prestigious Internships” in America, and the network is said to receive upwards of 10,000 applications annually for one of a few hundred positions. Townsend applied for one after learning of the opportunity from her boss at Columbia’s KOMU-TV (where she works as part of her journalism studies at Mizzou), Sports Director Ben Arnet.

The gig at ESPN will mean relocating to the network’s headquarters in Bristol, Connecticut this summer, where she will have her hand in a variety of areas when it comes to the 24-hour sports giant’s programming.

“I will be working behind the scenes to support content creation including shows like SportsCenter, other studio shows, and live events,” Townsend said. “My daily responsibilities will vary based on the sports season, ranging from running teleprompter, screening and logging games/events, to producing highlights, researching video content for various shows, and live event support. I will also edit video and research video content for various studio shows and networks. Lastly, I will be tasked with logging and archiving video and associated data for future use.”

So, a little bit of everything for the one-time Owl. Which means, based on her tremendously energetic involvement as a student at both William Woods and now at Mizzou, she will be right at home.

During her years at The Woods, Townsend was virtually everywhere when it came to communications opportunities, sports, and then some. She worked as a photographer and radio commentator for WWU sports events and served as team manager for the William Woods Softball Team. She spent several years interning for both the WWU Sports Information and Strategic Communication Offices. She was a member of the prestigious President’s Twenty, Student Alumni Council and National Society of Leadership and Success. She was even involved with her alma mater beyond her graduation in May 2021, serving on the WWU Presidential Search Committee well into the summer.

“I was able to do a lot of broadcasting at William Woods, including working with the athletic department where we filmed athletic feature stories and wrote web stories. In my communications classes at William Woods, I learned that the most successful content is the kind with a story behind it,” she said. “Working for the Owls Softball team and interning with the Jefferson City Renegades baseball team helped me acquire insight from a team perspective that helps me better understand how to cover all the teams I have been covering for KOMU. Also, the sports communication classes at William Woods helped me gain the research knowledge to later apply as practical knowledge at Mizzou.”

And Townsend has now quite literally taken her burgeoning sports journalism career to a new level at the MU J-School. Since enrolling in the fall of 2021, she has taken classes in reporting, producing, filming, social media, media ethics and research methods, but it is in the practical experience where she has really taken a step up. She has already served as the sports anchor for the weekly Saturday 6AM newscast on NBC affiliate KOMU-TV, filmed highlights of every sport from high school football and basketball to Mizzou Women’s Basketball and Softball games for broadcast on KOMU and worked as a digital sports reporter for the station.

“The experience at MU has been valuable and something I recommend to everyone,” she said. “The faculty, staff and other students want to see you succeed.”

To get a real feel for Townsend’s passion for sports broadcasting, consider one day in her current life, Thursday, March 17. She headed to the KOMU studio at around 8 a.m. to serve as an assistant producer for KOMU’s noon newscast, helping select stories, write content, decide show order, and helping keep the show on time from the director’s booth. After the show, she stayed at the station for some Zoom meetings, then went to campus to study until around 4 p.m. At about 6 p.m., she headed to Mizzou Arena to cover the MU Women’s Basketball team’s Women’s National Invitation Tournament (WNIT) game versus Drake, including filming highlights and doing postgame interviews. She then headed back to the station to archive the game’s highlights for future KOMU coverage.

The next day, and the day after that, Townsend will be ready to do it all again. When you are running down a dream, you do not want it any other way.

“No dream is too big or small,” she said. “Write down your goals and a couple of courses of action so that you can achieve them. When writing your goals, put down a date when you want to achieve them. This is what has worked for me.”

“As my favorite sports reporter Robin Roberts would say, ‘be patient and persistent. Life is not so much about what you achieve, but what you overcome.’ Overcoming many obstacles in my education career helped guide me to where I am today.”

Which is, clearly, going places!