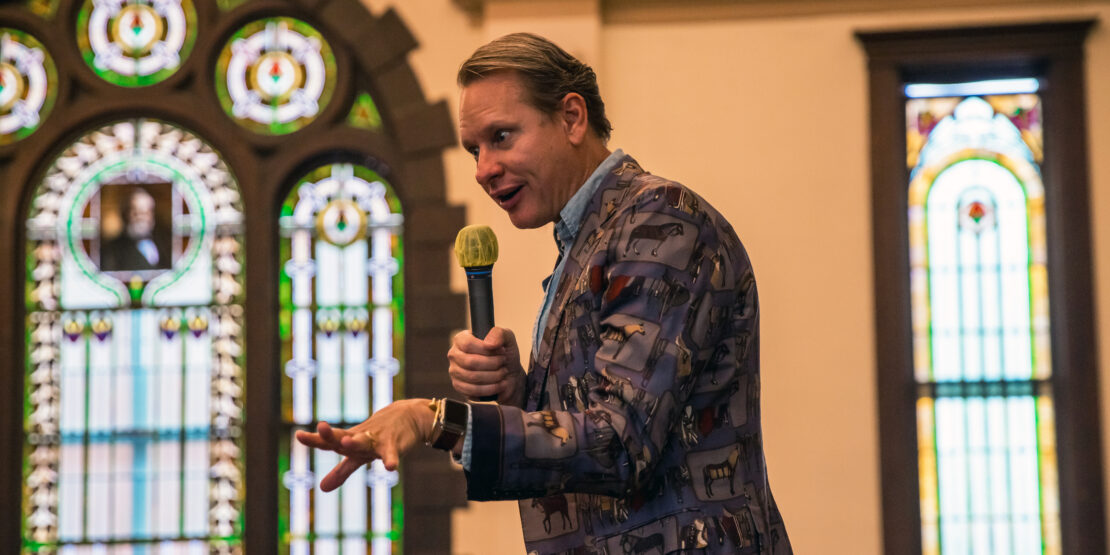 Carson Kressley first become acquainted with William Woods University when the university hosted World Cup Equestrian trials in the 1990s, when he first began building a relationship with the WWU Equestrian Science department. He has since gone on to star in the original Bravo series “Queer Eye For The Straight Guy,” was the host on the TV show “How to Look Good Naked,” took part in Dancing With The Stars and currently serves as a judge on “RuPaul’s Drag Race” on VH-1.

A World Champion equestrian as well, Kressley visited the William Woods campus this week 30 years later to share his experiences with students.

“I am excited to see the campus, Ms. Gayle Lampe, and the EQS students because that is where my passion is,” Kressley said in his first of two addresses to students at Dulany Auditorium on Thursday, April 15. “It is great to be back – the campus looks beautiful.”

As a longtime friend of WWU Professor Emeritus of Equestrian Science Gayle Lampe, Kressley worked with Lampe at the American Horse Show Association, now called United States Equestrian Federation. He organized clinics, while Lampe taught clinics for judges. When the organization contacted Lampe to see if she would teach saddle seat and do clinics around the United States. Kressley hired Lampe to teach. When not in the show biz, Kressley can be found at horse shows showing horses. He came on his current visit to William Woods reunite with Lampe, put on two LEAD events for students, tour the local horse barns, and ride Lampe’s horse.

“Over the years, he has become more himself and his own person,” Lampe said. “I think he has more confidence and people love his style.”

In his talk with WWU students, Kressley told a story about the biggest lesson he learned in equestrian. At a horse show in South Africa, he was forced to work with an unfamiliar horse because he was not able to ship his own horse overseas. The horse became unruly, but Kressley was still able to make it through most of the performance, doing eight out of ten gaits before the horse threw a shoe causing Kressley to have to withdraw from the competitions. However, he was happy with his performance. His perseverance taught him something that day.

“Whether it is life or a horse show, just keep going because you might be doing better than you realize and I thought I was the worst rider in the world,” Kressley said.  “The audience at that event and the owner of the horse were thrilled with my performance. I always think about that. I thought I was terrible, but at least we stayed upright the entire time. I think that is a victory.”

Kressley described his move from the equestrian world to fashion as a common thread. He grew up showing horses and was involved with the horse world but also loved fashion design and visual arts.  He did not have a formal education in fashion, but he knew about the fashion giant Ralph Lauren, the culture of the company and aesthetics of the brand.

“I believe that I could do great work at a major brand and I had confidence in me,” Kressley said. “I started at the bottom and worked my way up with great education from Ralph Lauren, and I learned so much being in the industry, like that details are important. Having a sense of urgency is also important because that is what the fashion business is all about, which is newness and freshness. Staying on top of things and doing quality work are so important. I do that with all my jobs and that came from working at Ralph Lauren.”

From his position at Ralph Lauren, Kressley one day heard about the reality show Queer Eye For The Straight Guy from a work colleague, who urged him to try out for the show.

“I didn’t know anything about TV, and they gave me the name of the network ‘Bravo,’” Kressley said. “In my head, I thought Bravo was a non-stick cooking spray and did not know what “Bravo” was. I called and found out when they were seeing people and I went. I did not even have a head shot or anything, but I had a picture of me with sweaters from Ralph Lauren. They really liked me and I made the show. I took a risk. Quit my job and the show wound up being popular and the show allowed me to do so many other things in TV.”

Eventually, he got invited to do the television show Dancing With The Stars. He wanted to use his Ralph Lauren experience, where perfection was key, and do a great job. He danced eight hours a day and would write the choreography down on a piece of paper so he could memorize the steps in order in case he got distracted. Dancing with the Stars was the most challenging experience Kressley has faced.

“Dancing With The Stars was a great opportunity,” Kressley said. “I was terrible at dancing, which is like math and physics combined. It was really hard but so rewarding to figure it out, even if I had to fake my way through with nice costumes and tactics.”

“A big showbiz lesson,” he continued, “is that performance art includes details, presentation and making something hard look easy. You do not want to give it away – if you forget your lines make something up; keep going and no one is going to notice. Do not defeat yourself by exposing yourself when you do not have to.”

Students like Aly Jacquemin enjoyed the event and hearing Kressley’s journey with Dancing With The Stars, his acting career and equestrian adventures.

“I thought it was awesome that he learned to stay successful and always said yes and didn’t miss an opportunity,” Jacquemin said. “I liked when he stated that even though he didn’t think he was coordinated to dance, he continued Dancing With The Stars and managed to have a lot of fun with it.’

“I like his let’s do it attitude,” Ruhlen said. “He had so much confidence and taught me that if you can believe in yourself, all things are possible.

Molly O’Connell attended the event because she had known of Carson for many years through the various television shows he has done.

“I did not realize he was an equestrian until someone mentioned to me that he donated a horse here and I saw the flyers for the event,” O’Connell said. “My biggest reaction and take away was how much the equestrian industry and growing up showing horses has prepared him and all equestrians, so well for life both personally and professionally. My favorite lesson that Carson shared was about just “riding through it” when you get nervous, whether that be figuratively or literally.”

Kressley at one time had no idea what he wanted to do in life, but his number one piece of advice is to say yes and not limit yourself.

“I embraced everything, stayed and figured it out later,” Kressley said. “Relationships are important. People move around to different jobs you never know. Be nice, say yes a lot and try different things. It led me to where I am. Being authentic has been the greatest asset.”

“Being The Youest You!” is the next event Kressley will put on with Lampe, today at 4:30 PM in Dulany, which will support the WWU Diversity and Inclusion initiative.