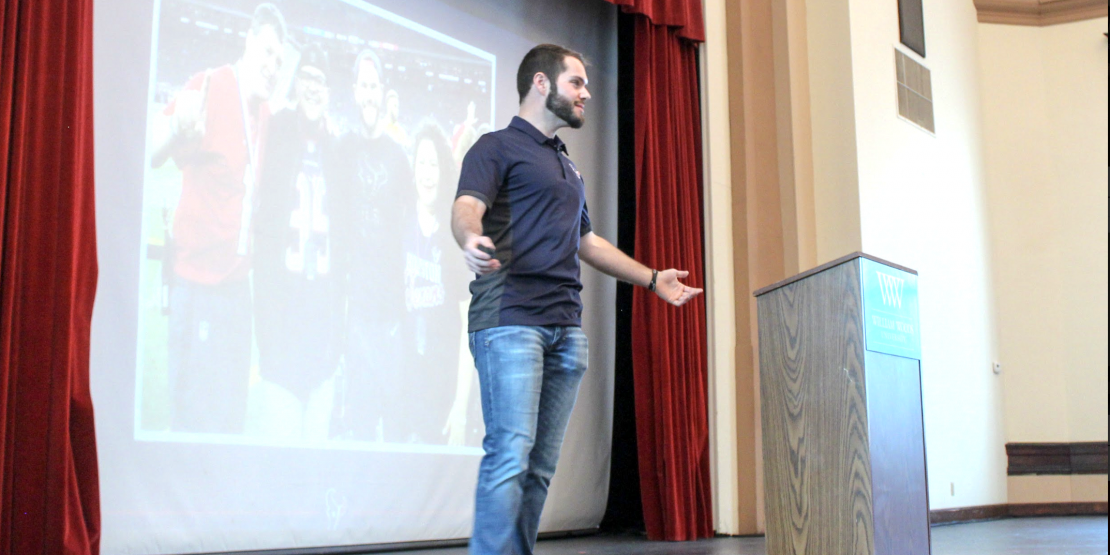 Omicron Delta Kappa (ODK) is a 100-year old national leadership honor society. It holds a lifetime membership and students have to be invited to apply for membership in the William Woods chapter. Students then must submit an application to be accepted in the organization. Each year, ODK holds a leadership conference open to all students on campus.

This year the conference took place at The Woods on Saturday, February 2. With a theme of “Fall in Love with Leadership,” ODK featured keynote speaker Andrew Johnson (Mascot Coordinator for the Houston Texans of the National Football League) and breakout sessions on the many qualities of leadership. This year a little over 100 students attended the conference, which was is free for them to attend.

“It was a lot of hard work but it turned out really good. I’m really happy with the way the conference went,” Barker said. “The t-shirts were also a great added bonus, we were able to give out 50 free t-shirts to the first students registered.”

But it’s not just the lure of a free t-shirt that gets students involved in ODK at William Woods. Current members actually actively recruit their campus peers who they think would make great additions.

“We invite students to join who are showing leadership skills and an interest in leadership on campus,” said Nick Hartman ‘19, who was on the committee to organize the keynote speaker.

It was Hartman who secured Johnson, a personal friend, to serve as keynote speaker for the event.

“I was responsible for communicating with him and being the liaison between him and the university. I was also responsible for logistics like picking him up for the airport,” he said.

The keynote speaker committee typically looks at bringing in a successful William Woods alumnus first, but also looks at the content of their speech and how it fits that year’s theme. The committee picks a list of top three speakers and contacts these individuals to see who can come and would be the best fit for the conference. Johnson, based on his role with an NFL franchise, was a favorite because he managed to speak to leadership in a general sense, but also in an athletic atmosphere, which appealed to William Woods student-athletes and Exercise Science majors.

There were eight breakout sessions after the keynote speaker that students could attend. They were led by faculty members, the keynote speaker, and one by a fellow student. Travis Tamerius, Director for Center of Ethics and Global Studies, led a session on love and leadership. William Woods Graduate Assistants Allie Dunkin and Josh Simonds joined together to lead a breakout session on finding your dream career. William Woods Chief Information Officer Jim Long, taught his session on critical thinking in the workplace. Nina McKee ’19 represented DECA and had an interactive session on finding what qualities make a good leader. Professor of Management Information Systems Linda Davis spoke about how leaders can influence workplace culture. Director of Career Services Amy Dittmer showed students how to ace an interview. Bob Jones, Coordinator of Fitness and Recreation, taught students about the connection between their mind and body, as well as keeping both healthy. And finally, keynote speaker Johnson led a Q&A session on leadership within the sports industry.

“I went to Travis’s breakout session and I loved it. He incorporated different songs, different leadership experiences and even a personal story which was really great to hear.” Barker said. She added that she heard nothing but positive impressions from other students about each of the breakout sessions.

“Leadership is a topic that is always relevant, especially for college students,” said Hartman. “In a short period of time, we will be in the working world, and can always learn more about what it takes to be the next generation of leaders.”