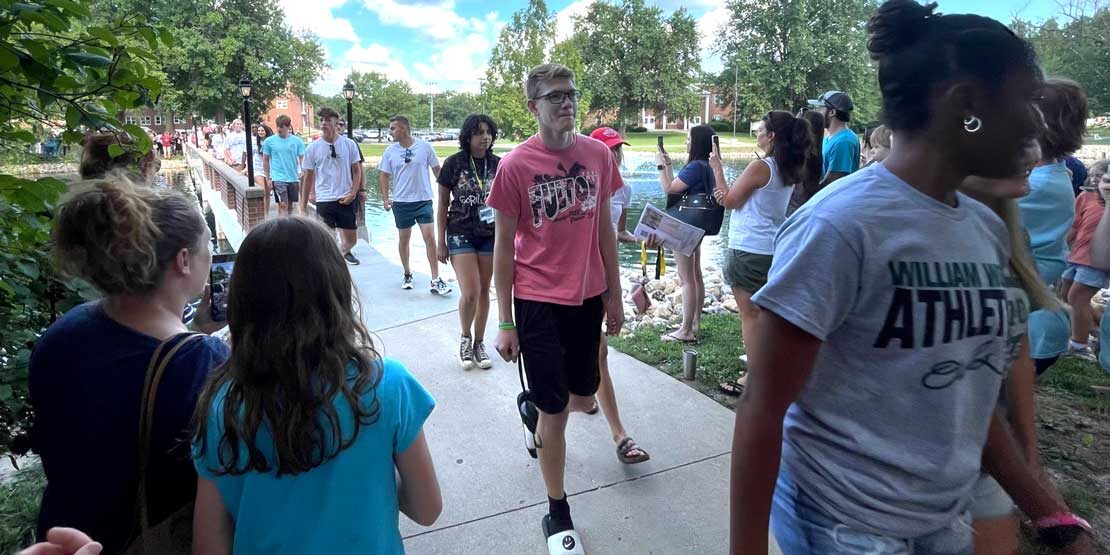 The William Woods campus that students said goodbye to for the summer when they departed last Spring had a somewhat different feel when the calendar turned to August.

During the first week of classes for the Fall 2022 semester this week, one could not help but notice so many new faces. As in new students, with the largest incoming class at The Woods in five years, a 40 percent increase in new students over 2021.

“We are thrilled to welcome an outstanding class of new students on campus to William Woods, our biggest in five years, and excited about the future of our University,” said President Moreland of the increase. “It is clear that the student-centered, professions-oriented, personal college experience we offer at The Woods continues to resonate with prospective students and their families, even at a time when many other institutions are facing enrollment challenges.”

There were also new faces in the University administration, and nine new faculty members.

But what might have stood out even more were some not-so-subtle physical changes to the William Woods campus, a process that began last spring.

Before commencement weekend in April, the University completed a new campus landmark, the statue-like W-W-U letters that are now stationed in the center of campus, in front of Senior Lake. There was a ribbon-cutting for the new walking and jogging trail around Junior Lake last Spring as well, but students returning to campus this August will have noticed that phase two of the trail is now pretty much complete; one can now walk or jog almost completely around the picturesque lake, with only a small bridge left to construct to finish the project.

The side of the Helen Stephens Sports Complex now exhorts William Woods supporters to “Go Owls!,” with large lettering bearing just that message in the massive panels on the west side of the arena, facing campus.

All of these projects are one thing, but what about significantly altering Senior Lake Bridge? Such a project, involving one of the most iconic structures on campus that has been the centerpiece of Ivy Ceremonies and other picturesque moments for decades, might seem to be a “bridge too far,” if you will, for campus traditionalists.

But without significant renovation, it might have been a “bridge (about) to fall.”

Maybe that is too dramatic, but the fact is, Senior Lake Bridge, built in 1948 and last renovated in 1969, was in need of some significant renovation to keep it standing and safe for all.

“Over the years, there has been some deterioration of all its concrete beams and the walkway,” said Mike Dillon, Director of the William Woods Physical Plant. “The brick façade rails were also continuing to lean outward, causing some electrical safety concerns.”

So last week, one day after the Ivy Ceremony, crews began the process of renovating the historic bridge. The project includes removal of all concrete beams, the walkway surface, brick rails and bridge lighting. Only the original concrete piers will remain, with a new concrete walkway and new steel handrails to match existing rails around McNutt Campus Center and Sorority Circle. The project also includes incorporating two ornamental lights on the new structure to match existing ornamental lights on campus walkways, and a widening of the walking surface from three feet across to six.

“The new bridge will be easier to maintain in inclement weather, and just a safer environment for our entire campus community and guests to campus,” said Dillon.

The newly renovated bridge, funded through a generous gift from the estate of Virginia (Piggie) Herndon ’47, is scheduled to be completed in October. And ready to make new memories for generations of WWU students, employees, alumni and campus visitors.

A large new incoming class of students, new faculty and staff, and some interesting new landmarks – seems like a pretty eventful first week for year number 153 in William Woods history!