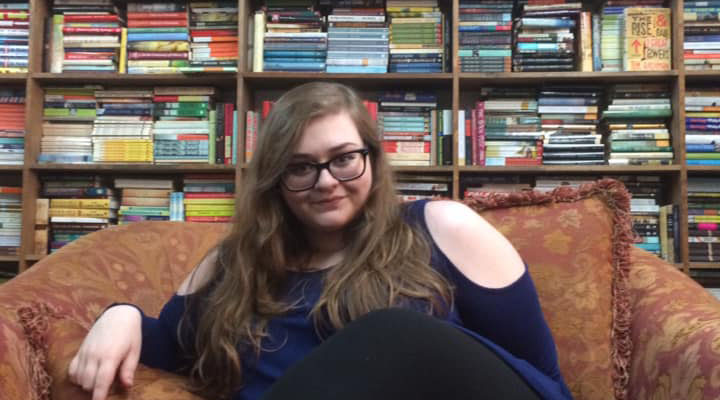 I’m from Southeast Missouri and I grew up in a very small town and went to a small school. I enjoyed the small-school atmosphere because it gave me the chance to know everyone and build actual relationships with the teachers, so I knew that I probably wanted to attend a smaller university. When my friend, who was a couple years older than me, was touring colleges, she visited William Woods and told me how much she liked it. Although she ended up not going herself, she raved about it so much that I decided to check it out.

During my first visit, I saw exactly why she had loved William Woods so much. It had a small-school atmosphere that was very similar to the one I’d grown up in. It was also only four hours away from home, so I could visit home regularly without much trouble. Plus, I got to meet some of the faculty during that visit and I was excited to learn from them.

I’m one of those people that likes to be involved in everything. Coming from a small school, I wasused to everyone—including myself—being a part of three or four different activities. I was in band, FutureBusinessLeadersofAmerica, student council, and so many others. When I got to William Woods, I wanted to do the same thing. I was part of the student magazine as a writer and then an editor. I joined and eventually became president of the William Woods chapter of the English honor society, Sigma Tau Delta. I was also the president of our chapter of the National Society of Leadership and Success. If there were new things to try and new people to meet, I was there.

That worked in my favor once I graduated. The organizations I participated in helped prepare me for professional networking. I learned to seek out and create connections that not only advanced my career but also helpedmegain close friends. With Sigma Tau Delta, for example, we went to conferences and presented our work, whichwas great for meeting people with similar interests and getting me used to sharing my writing. I like to write, but I don’t often share it with others -it’s something I do for me. When you want to work with people, though, you have to share your work in some capacity. Going to those conferences made me more comfortable sharing and being vulnerable in that way.

I made a lot of great friends at William Woods. Even people who I wasn’t close with during my time there have become some of my favorite people to talk to. We communicate a lot through social media and by tagging each other in memes on Facebook because that’s how we do it now. Social media is definitely a big help with keeping in contact. We do try to meet up every once in while, but it’s hard coordinating schedules since everyone is so busy with work. It’s one of those things where they’ll be free on Tuesday and Thursday but I’m only free on Monday and Wednesday. I’m hoping to meet up with a few of them this summer in St. Louis, since I still live in Southeast Missouri.

I took two creative writing courses at William Woods and those were really helpful. It wasn’t just about writing, but also about reading both published work and other students’ work and reflecting on the writing’s strengths and weaknesses, giving suggestions for improvement. Even if we didn’t know how to express what we thought could improve a piece of writing, our professor would often help us along—he’d say what we were thinking but couldn’t put into words. That helped me learn how to give better feedback. Giving that kind of feedback is most of my job now since I do developmental editing for novels.

Developmental editing is “big-picture” editing. It’s analyzing a manuscript and making suggestions for improving characters, plot, setting and other story elements. Maybe there’s a plot hole or a character thatfeels flat or something just doesn’t work. Those creative writing classes were a good learning opportunity for that kind of editing.

Freelancing and being your own boss

I started freelancing right out of college. I had a few contracts editing for content creators, small publishers and a ghostwriting company. Although I’m still technically a freelancer, I recently created my own business, The Editing Skeleton. Now I get to choose who I work with and what I work on. I work a lot with authors who plan to self-publish.

Freelancing can be really daunting and stressful. It’s not for everyone but it has worked for me. There are times when I’ve thought about quitting and getting an office job because it’s difficult, but it’s what I want to do so I make it work. I did a lot of hustling for jobs when I first became a freelancer. I searched online and took every job I could. I worked a lot of jobs that weren’t ideal, but they helped me get started.

A lot of the process is looking for jobs and networking. In the beginning, I used sites like Upwork, but I try to avoid those now because they usually don’t pay fairly. However, I did find one steady job through Upwork right when I graduated. I still work with them although I now help them hire new people and provide skill development to their team rather than edit for them.

Once I decided to move on from editing for them, they were very understanding. It was a great entry-level job, but I wanted to be my own boss and work on projects I had a passion for. Starting a business is difficult. To get new clients, I’ve done a lot of networking on social media like Twitter. There’s a huge writer community on Twitter so that’s a great platform for people who want to network with authors and publishing industry professionals. I also called on connections that I made when I completed internships in school to find leads. Through these different networking efforts, I managed to get consistent work within just a couple months. Now I have people emailing me almost every day who want to work with me.

Life as an editor

At the moment, I’m not working on a novel. I just wrapped one up and I like to give myself a little bit of downtime between big projects so I don’t burn myself out, but I work on smaller projects in the interim. For example, I work with a couple of websites and apps that publish serialized fiction—basically, they send out stories by the chapter.

When I’m not working on a novel, my schedule looks like this: In the morning I do hiring for the company I previously mentioned and do a little content creation about writing and editing topics. In the afternoon, I edit a few chapters or story installments each day. On the side, I also work for a magazine where I interview authors about their books and ask questions about their craft and writing process—how they wrote the book, how they decided on different elements, and similar things.

In my spare time, I take skill development courses. I’m taking several courses right now through the Editorial Freelancers Association to learn more strategies for developmental editing. I’m always trying to improve my skills and that’s the area of editing I enjoy most.

Cultivate good relationships with your professors. When I was at William Woods, the English faculty were such a great help to me. Even now, they offer advice and encouragement. One of the best things I did while in college was my mentor-mentee project with Dr. StephanieWells. I read her novel and helped her compile information about how and where she might publish it. I reached out to different publishers and researched publisher preferences, specialties, and submission processes. I wouldn’t have had that opportunity if I hadn’t gotten to know Dr. Wells.

If you can, you should also start trying to build connections and a portfolio while you’re still in school. Even just setting up a LinkedIn profile or a professional Twitter account (if you want to work in publishing, for example) can open so many doors. It would have been beneficial for me to build more connections while I was in school. I had a few, but I think networking more before I graduated would have made it easier to get into what I wanted to do in a shorter amount of time.

William Woods University2 hours ago
Free lunch and a LEAD point for WWU students! Come hear from local entrepreneurs and enjoy lunch on us!

William Woods University1 day ago
William Woods is the place where leaders are made! Make plans to join us this week for the first-ever Leaders At The Woods leadership summit, featuring the final lecture by our outgoing President Jahnae H. Barnett, and additional presentations, panel discussions, and networking opportunities on the topics of leadership, professionalism, and career enhancement! Find the schedule of events here: https://www.williamwoods.edu/events/2021/10/leader-summit.html

We are excited to announce the first annual Leaders at The Woods Leadership Summit with events for students, alumni, faculty, staff and our community. This four-day event is sponsored by University Advancement, the WWU Leadership Center, Student Activities Council, and the WWU Alumni Association, an...
34    View on Facebook

William Woods University4 days ago
WWU Admissions is pleased to announce that the Amy Shelton McNutt Scholarship application is now open for first-year students for fall 2022. One high-achieving high school senior is awarded this FULL TUITION, ROOM AND BOARD scholarship each year. Read more & apply.