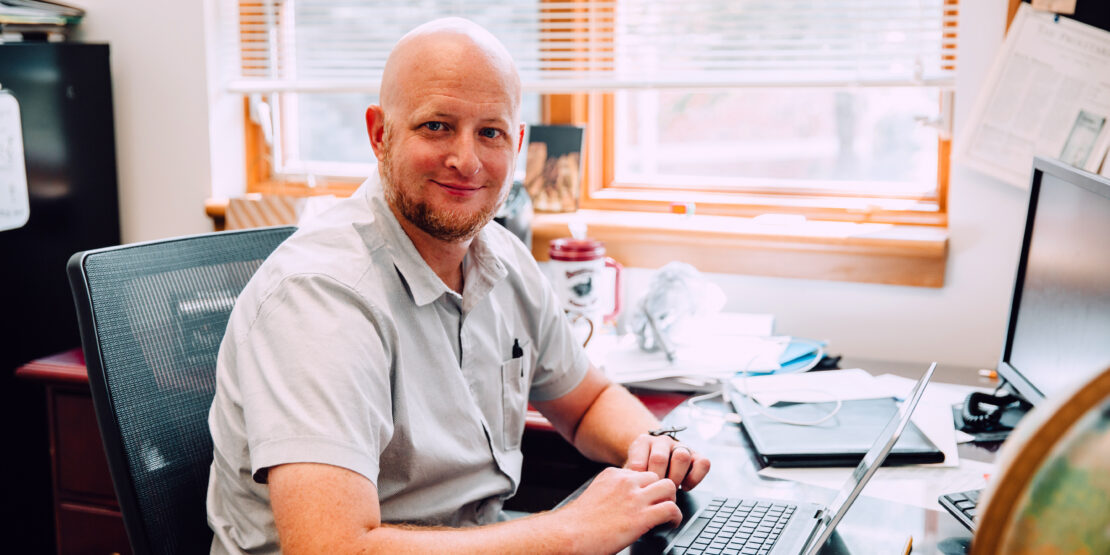 The Louis D. Beaumont Dad’s Association Distinguished Professor Award has been presented each year to a William Woods faculty member since 1968. Nominations are received from students, and a small group of invited students then choose from among those nominated which full-time faculty should receive the award that year, based on dedication to quality teaching. This award is incredibly meaningful to faculty because it is given by students.

One of the professors who was nominated for this year’s award was Anthony Cavaiani, Ph.D. Dr. Cavaiani has been an Assistant Professor of Communications at William Woods University since 2014. The first thing that stood out to him about the University was the campus.

“It is beautiful, and the university takes pride in keeping its appearance in excellent shape,” he said.

The second thing was the people.

“I have meaningful conversation with students and colleagues throughout every week—and it helps keep things fresh.”

Dr. Cavaiani’s favorite memory from working at The Woods couldn’t be narrowed down to only one thing. He recalls taking William Woods students to a speech tournament in Kentucky in the fall of 2016.

“Those students had just been introduced to competitive speech/debate the month prior to us competing at the tournament,” he said. “We all rallied behind each other, built each other up, and had a phenomenal weekend. Our debate team took 2nd in novice division and one student placed in a speaking event. It was a proud moment for all of us, for a variety of reasons.”

The other memory that stood out to Dr. Cavaiani was taking students in his sports communication class to visit the sites of old ballparks in Saint Louis.

“St. Louis has a rich baseball history, and we all shared in the experience of seeing those sites together and learned more about the significance of sports.”

Learn more about Dr. Cavaiani as he answers the following questions:

Interesting fact not many people know about you:

I went skydiving in 2005. Was able to check that off the bucket list.

What has been your favorite class to teach?

Tough question. Love them all. I get excited for them in different ways. I’ll answer it this way—I really enjoy teaching my COM 330: Communication Law course and my COM 320: Communication Theory course. I love theory. My COM 214: Sport Communication class is up there, too.

Do not be afraid to speak up in class discussions. Many of us are insecure about saying something that could be perceived as “wrong,” but when you participate in discussions everyone benefits from hearing what you have to say.

What drew you to communications?

Competitive speech/debate. I competed on the team as an undergraduate and was a Psychology major. I decided to add a second major in Communication in case I wanted to go to graduate school to coach forensics. I went to grad school in COM and immediately felt a connection to the discipline.

What stands out to you most about The Woods?

Two things. First, the campus. It is a beautiful and the university takes pride in keeping its appearance in excellent shape. It was the first thing I noticed when I first visited. The second thing is the people—I have meaningful conversations with students and colleagues throughout every week—and it helps keep things fresh.

Ben Schmiemeier '21, is majoring in Communications - Public Relations Concentration along with a minor in Business Administration at William Woods University. View all posts by Ben Schmiemeier