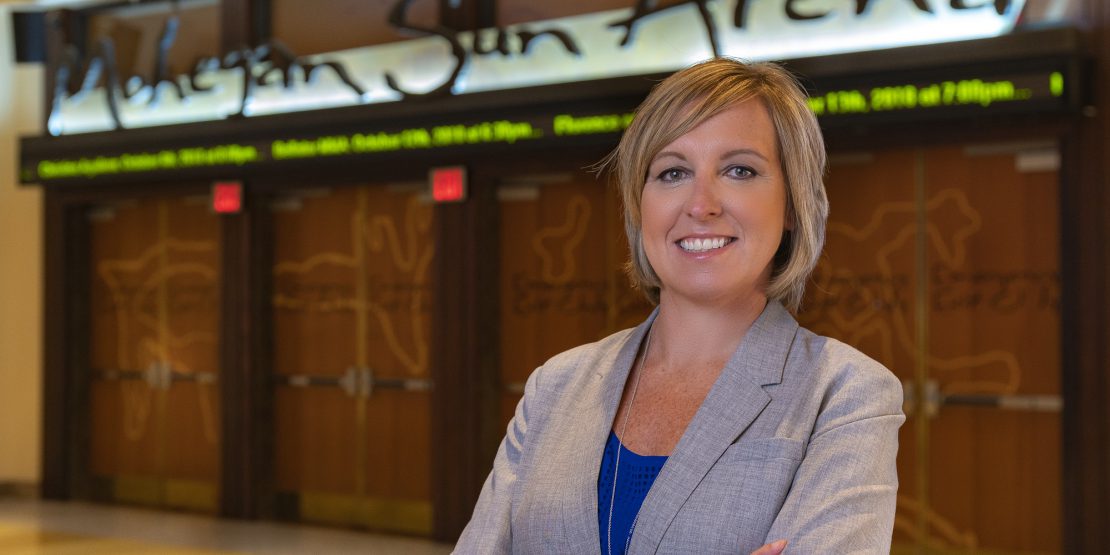 Amber Cox ’96, ’98 is Vice President of Sports for the Mohegan Sun, which is a gaming and entertainment company based in Connecticut. In her position, Cox oversees the business and all revenue-generating opportunities for two professional sports teams, the Connecticut Sun of the Women’s National Basketball Association (WNBA) and the New England Black Wolves of the National Lacrosse League (NLL), including ticket sales and sponsorships, and marketing, community and public relations for both teams. She recently visited with reporter Veronica Townsend of The Woods Today about her time at William Woods, and how it shaped her professional career.

When I came for the visit, I drove on campus with my mom and it felt like home immediately. I knew I wanted to play basketball and had a great opportunity there and a great team at the time. I was recruited by Roger Ternes, who was the long-time athletic director, softball coach and basketball coach at WWU. I knew I would get a fantastic education at William Woods, but did not know coming in what I wanted to do. Eventually, I got to the point where I was an English Communications major, working for the student newspaper. I ended up staying and earning my Master’s in Business Administration. WWU is a wonderful place that I hold near and dear to my heart, as my studies there and experiences put me in the position to succeed. I learned so much about myself and had so many great experiences as a student athlete. I learned from incredible professors who shaped and changed my life. I loved and still love being an Owl!

I really learned how to be an effective communicator at WWU. Being a student athlete taught me how to be a good leader and teammate. The class sizes were small and served as an advantage to my education. We were encouraged to speak up and share our opinion. I credit my professors and coaches in helping me find my voice. As a student athlete, I learned how to manage my time and the ups and downs – winning and losing, etc. Those lessons have served me well in my career.

I love basketball and I knew – probably around my junior year – that I wanted to find a career in sports. I did not know at the time what that meant. I was not as familiar with pro sports. In Fulton, you have some nearby pro teams in Kansas City and St. Louis. For the most part, my experience was confined to playing in the NAIA and my experiences at William Woods. I credit people like Coach Ternes, Joy Grimes, Florence Krause, Dr. Barnett – the many incredible people at The Woods who provided me with opportunities and encouragement along the way. I wanted to be a sportswriter at first but eventually decided on being a Sports Information Director, which was a natural transition because I was able to do a lot of writing and creative projects on behalf of one athletic department. That career path opened the door to all that followed.

Working in the sports industry

Following my time at WWU, I worked at an advertising agency in Columbia called Visonworks Marketing, where I learned so much  – how to interface with clients, network and develop business processes for organizations. I was then hired by Columbia College as its sports information director and spent five years working for Bob Burchard, who gave me a lot of freedom to grow and try new things within our department. By the time I left Columbia College, I was an assistant athletic director. I was looking for another opportunity and really just wanted a change of scenery after living in Missouri my whole life – I was tired of cold winters! I was searching on Team Work Online, which is a common sports job board and saw a Director of Marketing position for the WNBA team the Phoenix Mercury. I applied and thankfully, the then-COO Jay Parry, who has become my mentor, took a chance on me. I think she saw my passion for women’s basketball and my skill set from working in small college athletics at WWU and Columbia College as a positive. I could do a little bit of everything – I was used to working the score board, setting up chairs, recording statistics, developing media guides and occasionally even being the announcer. I did not know much about the business of professional sports at the time, but learned so much about the industry over the first couple of years and from there it has been off to the races.

After my time in Phoenix, I worked for the Big East Conference in New York and went down to Houston to work for Major League Soccer. I knew I wanted to return to the WNBA at some point, because I love the league and the women in it. WNBA players have always been leading voices in social change. They are passionate about ensuring they do everything to exemplify what they stand for and what we all should stand for. Then the job for the WNBA team, the Connecticut Sun, came up. I knew the CEO of the Sun from my time when I was in Phoenix. He called me and asked me if I would be interested. I knew they had an amazing fanbase – I consider Connecticut to be the women’s basketball capital of the world – they are so supportive of women’s basketball at every level.

I visited Connecticut as a part of the job interview and the executives mentioned their lacrosse team. I did not know much about the sport –I had seen the outdoor game, but never witnessed an indoor game. I now know that lacrosse is a sport on the rise and is entertaining. I enjoy learning about the players and the league, and seeing the team grow as well. The Black Wolves was a part of the job coming back to the WNBA, but I love both my teams so much. I enjoy the differences in them, which creates a lot of diversity in my days.

I love how the women of the WNBA have always been leaders in driving social change. From the LGBTQ+ community to Black Lives Matter, these women have always raised their voices to create positive change in our world. You are seeing that come to the forefront even more right now obviously and I’m so proud to work on their behalf every day. We need to continue to build platforms and programming to be a part of and support these efforts. We are going to make sure that we are doing all we can to eradicate racism and are not going to stop until it’s no longer an issue. Both of our Mohegan Sun teams have put out statements in support of the Black Lives Matter movement, but the bigger opportunity for us is to create sustained action.

Every day is a new day with new challenges we have never seen before. We do not know what the future holds. I credit the leadership of the WNBA, which has done a great job along with our broadcast partner ESPN of holding the draft virtually. There are so many players who have worked their entire careers to get to that moment to be drafted. I am sure having the draft virtually was not what they expected, but to give them their moment was important. The WNBA has been around now for over 20 years and has gained positive momentum, especially in the last year; we want to keep that going. We are committed to doing everything we can to find a way to have a season. Obviously the priority is the health and safety of all involved, but we are hopeful. We wish we were playing games in front of fans right now. The Connecticut Sun made it to the WNBA finals last year, and we are anxious to get back and try to win that championship for our incredible fans. It can be frustrating; I have a tendency to want to try to control the uncontrollable. But that’s not possible right now, so we try to do the best we can and control the things that we can and make the best of it.

Meanwhile, the New England Black Wolves Lacrosse team was in first place this season, after building towards winning a championship for a few years. We were hoping to find a way to finish the season, but we could not figure out the best way to do that after COVID-19 struck and decided to turn our attention to next year. I feel bad for our players. They put so much into it and had our team in a good spot, but even with the challenges, we are excited to put all our energy into next season.

Signing off with sound advice

Do not be afraid to take chances. I grew up in a small town in Missouri and went to WWU. I know that sometimes, stepping outside your comfort zone can be scary. I was certainly scared to death to take a leap to Phoenix. I did not know much about working in professional sports. I was moving to a big city where I barely knew anyone. I took a chance on myself. I listened to my heart. Following my inner voice was important and has continued to lead me to new, fun and challenging opportunities. I’ve lived a life I never could have imagined when I was a student at William Woods, but I owe a lot of what I’ve been able to accomplish to my time there. My message to every William Woods student is that being an Owl gives you an incredible foundation. Build on that and find your passion. Work hard, take chances and good things will happen. GO OWLS!

Have you seen the latest issue of @sportslockermagazine? #WilliamWoodsUniversity #undergraduate Lanie Lowry @lanielowry is featured on pages 64 and 65! Check it out online at www.sportslockermagazine.com and see our ad on page 65.

It is time for the #FridayFacultyFocus featuring Brenda Popp, #Professor in Finance with the #WilliamWoodsUniversity #SchoolofBusinessandTechnology.

At William Woods, our #smallcampus is truly a #community where there is

Five Questions with University Counselor Jenny Coon | William Woods News
Jenny Coon is one of the two university counselors at William Woods University, with whom students can set up an appointment with to talk about issues like anxiety and feeling overwhelmed in school. C
news.williamwoods.edu
16 1    View on Facebook

A #Thursday #ThankYou to everyone for your diligence in keeping the #WilliamWoodsUniversity campus safe! As of today? #ZeroCOVIDcases 👍🏻❤️