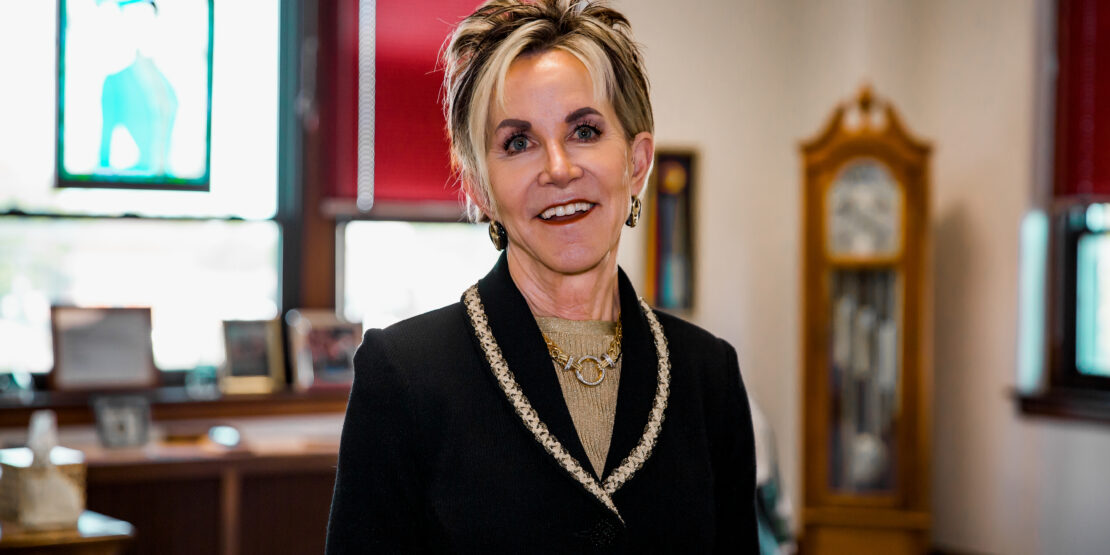 The March 2 announcement of Dr. Jahnae H. Barnett’s intention to step down as William Woods President at the end of the year, after more than 30 years of transformational and innovative leadership, signaled the coming end of an incredible era at The Woods.

In her three decades as president and nearly half-century association with WWU, President Barnett’s impact on the university has been unparalleled. From the growth in enrollment and campus facilities, to the innovative academic programs established, and through the overall groundbreaking transition from women’s college to modern university, Dr. Barnett will depart William Woods as one of the most influential figures in the institution’s 151-year history. But the biggest impact she will leave will undoubtedly be the generations of students she taught, influenced and mentored. And no better example exists than the three highly successful professionals currently serving on the WWU Board of Trustees who were once her students.

Every time a student becomes an alumnus, they have a chance to reflect on their years at William Woods University and consider how the university, faculty and staff shaped their future. Current board of trustees members Romaine Seguin ’82, Vicki Wilkerson ’77 and Kathleen Kunkler ’82  have prized their relationship with Dr. Barnett, who helped set them on the path to impressive professional success and lifetimes of service to their alma mater, when they first interacted with her at WWU so many years ago.

“To see former students, attain international success in their own right, then return to William Woods to give back to the University which gave them their start, and to work alongside me as members of the board of trustees, gives me enormous pride,” Dr. Barnett said. “Seeing a student succeed is gratifying, but seeing a student succeed and then invest their time and talents so that others might realize their own dreams, is truly rewarding. I am uncertain as to how many university presidents can experience the rewards of seeing their students achieve in the classroom, achieve in our global society, and return to serve their alma mater as members of the board of trustees.”

As a successful executive for over 37-years, working for many companies with her current job being at UPS, Romaine Seguin had humble beginnings at WWU sitting in a microeconomics class with Dr. Barnett. Seguin credits Dr. Barnett’s patience with helping students to understand the economy and math associated with the class. Fast forward to 2011, Seguin received a visit from Dr. Barnett and Vice President Scott Gallagher and was asked to be on the board. Seguin accepted and is now the chair of the board.

“Dr. Barnett is a wonderful human being who sees the upside of life,” Seguin says. “Seeing her go from my professor to the president of the university is amazing. She has an engaging leadership style and listens to what students want. There is a lot of goodness that I have seen and have enjoyed seeing her as the president of WWU.”

Another member of the WWU Board of Trustees who had Dr. Barnett as her advisor was alumnus Vicki Wilkerson, a native Callawegian. Wilkerson remembers hearing Dr. Barnett’s prolific ‘Southern Drawl’ for the first time in one of her freshman business classes. It would be Dr. Barnett who would challenge Wilkerson and introduce her to the paralegal studies program that led Wilkerson to a successful law career. That success is what led Dr. Barnett to offer Wilkerson a spot on the Board during a summer campus visit.

“She had this ‘drawl’ that I was mesmerized by,” Wilkerson said. “It was her ‘drawl’ that attracted me to her that created an open dialogue that has lasted over many years. She was super young in her mid-twenties and students gravitated to her because of her openness and directness. She still is youthful and direct and I find looking back that I wanted to emulate Dr. Barnett’s intellectual and professional qualities.”

As a small-town kid from Kansas and a former student athlete at WWU, board member Kunkler knew Dr. Barnett as an instructor and worked for her for a couple of years when Dr. Barnett was director of admissions. Following her stint at WWU and working in the communications field for a couple of years, Kunkler landed a job as a financial advisor for Morgan Stanley and has been there for over 35 years. Dr. Barnett was impressed by Kunkler’s leadership at Morgan Stanley and extended the invitation to be on the board at a dinner.  Kunkler applauds Dr. Barnett for having a very diverse board and putting together an amazing group of people. Kunkler believes it has been and honor in privilege in the professional world with her continuing to try to lead like Dr. Barnett does professionally.

“Dr. Barnett has an attention to detail to how we can succeed with the kind of students we were drawing in during her tenure at admissions,” Kunkler said. “If there was a kid that wanted to come to WWU, we would find a way to get them here. Dr. Barnett is always very driven, achievement oriented and an over achiever in all she does. My impression of her as a professor from my friends who had her was that she was tough, funny, smart and taught the skills you need to achieve outside of school and in business.”

Seguin, Wilkerson, and Kunkler and are three examples of how their educational relationship with Dr. Barnett helped them to blossom in their career and a long-standing relationship with the university. Through her 48-year journey at The Woods, Dr. Barnett has also had close interactions with the three Young Professional Trustees currently on the board – Lucas Watson, Morgan Westhues, and Carl Sweezer, all of whom were in the President’s 20 when they were students at WWU. Dr. Barnett also recruited current board of trustee Shellee Spring to be a student at William Woods.

These are but a few stories of the countless students that President Barnett influenced during her unprecedented tenure at WWU. And while her time at William Woods is now officially in a countdown until its conclusion, one thing will remain long after she has left: the incredible legacy Dr. Barnett will leave behind that has shaped the university into the successful, modern university it is today.

William Woods University14 hours ago
Today, William Woods is officially releasing its blueprint for the University’s future, a plan that focuses on its academic culture, enrollment, investment in facilities/technology, and partnerships.

William Woods University4 days ago
Congratulations Debbie for 20 years of service at WWU.
2    View on Facebook

William Woods University4 days ago
Reality show star Carson Kressley, also an accomplished equestrian, has a long relationship with William Woods. This week, he is back on campus sharing his thoughts on succeeding with WWU students.