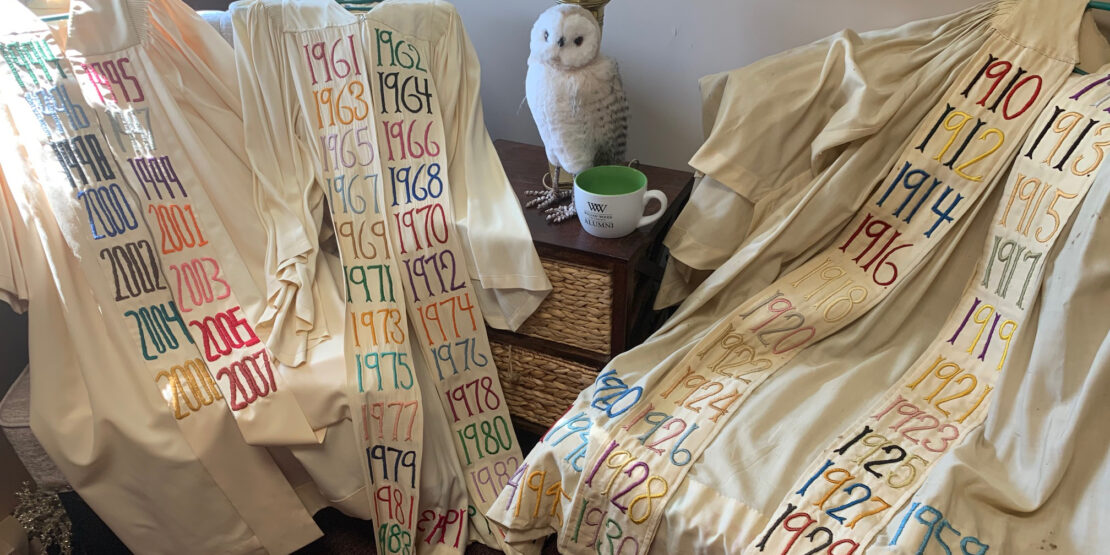 One of the storied traditions at The Woods involves the senior class robe. A white WWU robe is passed on each year to the senior class president of the Student Alumni Council organization, who then wears the robe at events including the Ivy Ceremony and graduation during their senior year.

“My message to the freshmen was to work hard to allow time for play, and to not stress the small stuff,” Iman said. “I let the freshmen know that it was ok to change their career path if needed, to ensure that they were truly following their dreams and what made them happy.”

After earning her degree in English Communications, Iman is now a lobbyist at the Missouri State Capitol. She did an internship at the Capitol when she was a senior at WWU and knew that was what she wanted to do the rest of her life.  For 35 years, she has been representing clients for non-profit organizations such as Missouri Citizens for the Arts and the Missouri Nurses Association, as well as corporate clients such as The Boeing Company. Through her success, she advises students to build relationships.

“Make those friendships – for they will last you a lifetime,” Iman said. “You are in a special bond with those attending William Woods University and those friendships will be so valuable to you throughout your entire life.

Christi (Slizewski) Tennyson ‘97 had picked the color silver for her graduation year because she was a Dallas Cowboys fan whose colors are silver and blue. Wearing the robe with her silver year embroidered on it, Tennyson led students from Dulany Auditorium towards the complex. She spoke in the microphone and welcomed the new freshmen to The Woods. Fast forward to graduation that year where Tennyson spoke at baccalaureate, encouraging peers to give back to the University as they were able.

“It was always a fun conversation starter when people would see the picture of me at graduation with the robe and then explaining it to curious minds as to why I am wearing it,” Tennyson said. “It is a really meaningful tradition for those who have had the honor of wearing it.”

One can now see Tennyson working professionally as a minister in the United Church of Christ while serving as president of the alumni board and advising her sorority on campus. Her son is a freshman this year and she volunteers as an alumnus and is a proud “Woods Mom.”

“I was exposed to good opportunities for public speaking, leadership and bonding with others at a young age and I think all of that is part of my experience at The Woods, and as senior class president,” Tennyson said. “I gained a valuable education and continued my success in Seminary. When you go back to school at 37, it is a little nerve racking, but I was well prepared with my William Woods education.”

“It was with great duty and honor that I was able to be the first male senior class president in the history of William Woods,” Struemph said. “Without the work that Dr. Jahnae Barnett and others put into the University, I never would have been able to be a part of history like that. My hope is that other men will also be able to serve as senior class president at William Woods to continue that legacy.”

To lead the Ivy Ceremony, Struemph wore the robe and chose royal purple because that was his fraternity color.

“Just knowing the class presidents that had worn it prior to me, I knew that it came with great duty and honor to wear it as the senior class president,” Struemph said. “My speech was about persistence and stepping outside of your comfort zone to make the most of their experience at William Woods. I would tell my senior self to continue to make lasting connections with people on and off campus to set up future success.”

He is currently in the process of relocating to St. Louis and starting a new job in the near future. His advice for future senior class presidents would be to make the most of the position and help lead their class into be an active young alumnus of William Woods while continuing to help impact the University for many years to come.

“Just knowing the legacy of the tradition at William Woods with the Ivy Ceremony, it has been very humbling knowing that I have been a part of that and was able to continue to share it with future students of William Woods,” Struemph said.

Welcoming the freshman class and giving a speech to the parents and family members of the incoming students was a joy for Baylie Pezold. She believes it is a huge accomplishment and is so proud to be one of the senior class presidents.

“I strongly believe in the ideas of traditions, because though things are consistently changing around us, I think it’s still important to continue some symbolic traditions like wearing the robe and the ceremonies,” Pezold said. “Thank you to William Woods for this opportunity and for allowing me to represent the campus. I am forever grateful for the wonderful connections and the knowledge and experiences I made.”

“I picked this topic because of how William Woods provides so many opportunities to all students,” Pezold said. “This allowed me to tell the incoming class and family members all about the opportunities and events I was involved with to expose them to just a little bit of what William Woods offered.”

Pezold is living in Fulton with her husband Michael Pezold and is currently working as a project specialist at Burcham Companies in Holts Summit. She advises students to enjoy every moment because it goes by fast, while taking advantage of your professors’ connections and reaching out to alumni from WWU.  “It was truly a wonderful experience and I was so proud of myself and everything I had accomplished to get to that point,” Pezold said. “I was proud to be leading my fellow classmates and other William Woods students who looked up to me.”