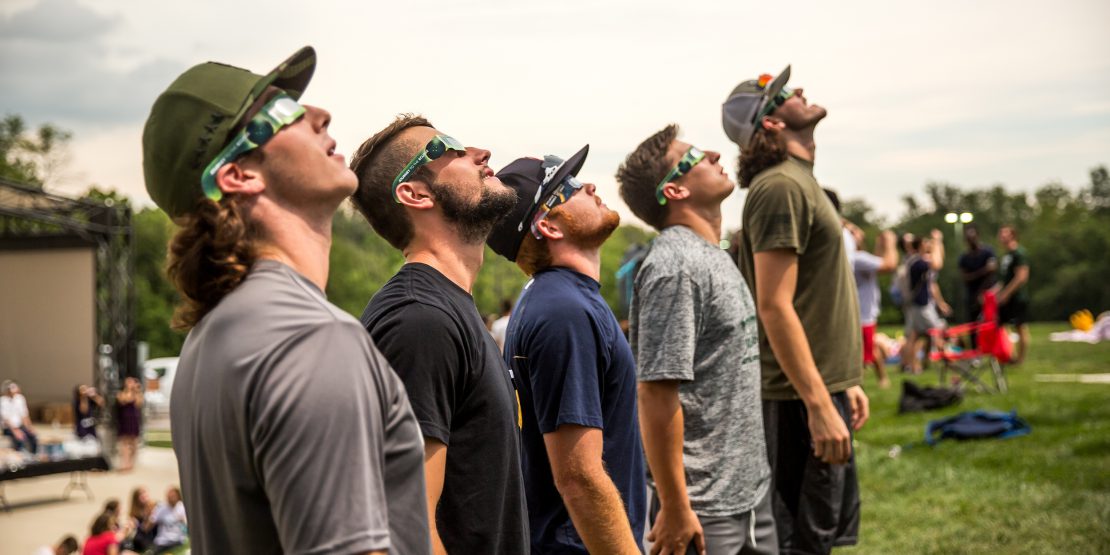 The 2017 Solar Eclipse passed right over campus and we were able to enjoy this rare celestial phenomenon when the moon blocks out the sun. Our area of Missouri was lucky enough to be at the center of the path, meaning we experienced one of the longest and fullest eclipses (called totality) at 2 minutes and 34 seconds.

The William Woods community joined together to celebrate this event, which was also the first day of classes for the 2017–18 academic year. There was a giant two-hour viewing party during the early afternoon at the campus amphitheater, with music, food (including SunChips and moon pies!), and lots of fun. And official WWU viewing glasses, of course.

“The eclipse was such a monumental event that it only seemed right to celebrate it with the entire WWU community and start the semester off with bang,” says Amy Dittmer ’97, MBA ’11, director of career services and student transition, who organized the festivities.

Kicking Off the School Year

Everyone loved beginning the semester with a party. Classes were canceled during the eclipse (at the discretion of the professor), so students were able to mix with faculty and staff and enjoy the experience.

“This was a once-in-a-lifetime opportunity,” says Nick Hartman, a freshman from Smithville, Mo. who is majoring in Communication and Political/Legal Studies. “None of us will ever forget watching the moment of totality at The Woods. I enjoyed the opportunity to meet new people, develop new friendships, and get to know faculty members. I would absolutely mark it up as a successful day.”

Casandra Ramsey ’19, a History and ASL Interpreting major from San Diego, Calif., agrees. “I think it was a great way to start off the school year because it was a memorable event for everyone and it brought our community together.”

The extended William Woods family even joined in the celebration.

“I had friends whose families drove over four hours to come watch it with them,” shares Baylie Borman ’18, the senior class president and a Business Administration major from Fulton, Mo.

Even some of our graduates came back to campus for the day.

“Alumni told me that the eclipse was even more special because they were able to see it at William Woods, chat with students, and enjoy the fun atmosphere,” says Becky Stinson ’72, director of alumni activities.

The WWU science department brought out its giant telescope for the occasion. Party attendees were able to look through the viewer to get a close-up of the event.

“It was a really cool experience seeing a clear, zoomed in picture of the moon passing by the sun,” says Borman. “There was a long line of people who wanted to take a look. It’s pretty awesome that William Woods has a fancy telescope to take advantage of.”

When the moon began blocking out the sun and darkness covered the campus, everyone started shouting and taking photos and videos. Then it became almost peaceful as people sat back on their blankets and chairs and marveled at the eclipse.

“My favorite part of the viewing party was seeing the students’ reactions as the eclipse was happening,” recalls Dittmer. “There were ‘oohs and ahhs’, smiles, cheers, and an overall happy vibe.”

This was an experience that people will never forget. “It was so extraordinary to be able to witness such an event and celebrate it with the whole William Woods community,” says Borman.