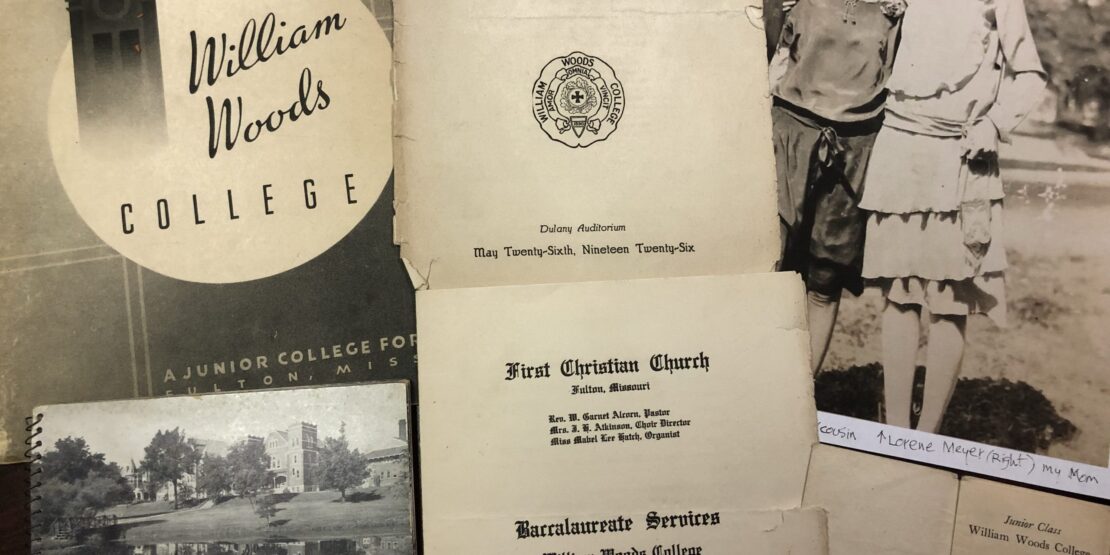 For Martin Rosenberg of Blue Bell, Pennsylvania, it was an ordinary exercise many of us attend to from time to time. While going through some old boxes in his home, the 76-year old Rosenberg came upon some nearly century-old items that recalled a prominent time in the life of his long deceased mother.

Little did he know that the items he uncovered would be welcomed as rare artifacts at a small university located hundreds of miles to his west, in Fulton, Missouri.

You see Mr. Rosenberg’s mother, Ms. Lorene Meyer, was a 1926 graduate of what was then known as William Woods College. After stumbling upon the discovery of dog-eared copies of her commencement and baccalaureate programs, and other printed booklets describing life at William Woods in the mid-1920’s, Rosenberg contacted WWU. And what followed was the donation of materials that provided our present-day university with a rare glimpse at life on campus nearly 100 years ago.

“My mother was born in St. Louis in 1907 to Rosa and Max Meyer, and at some point they moved to Fulton where my grandfather owned a men’s clothing store,” said Rosenberg. “I’m not sure what the circumstances were that led her to William Woods, where she trained in American Sign Language and Art. I’m afraid I do not have much more to offer about her campus life.”

Fortunately, the fraying memorabilia donated by Rosenberg does just that – it offers a story about life on the William Woods College campus in a bygone era. The programs for the baccalaureate service and commencement, held during what was then known as commencement week, describe a variety of activities from Sunday, May 23 through Wednesday, May 26, 1926. The 101 graduates spent their final week on campus attending a senior breakfast, competing in a tennis tournament, having swimming, art and home economics exhibitions, and enjoying a recital by the college’s music faculty, all sandwiched between Sunday’s baccalaureate (held at First Christian Church in Fulton) and Wednesday’s commencement (Dulany Auditorium).

The program for what was at the time the 36th commencement for William Woods lists the graduates, broken down by areas of academic emphasis, including Piano, Violin, Home Economics, Expression, Physical Education and State Teacher’s Certificates. Among the honors were one from the Women’s Athletic Association, which went to the graduate who was voted the “best all-around college girl.” The commencement address was provided by a Dr. H. O. Pritchard, of Indianapolis, Indiana.

Even more fascinating are two booklets that could be considered college marketing materials for their time. One includes a portrait of the William Woods president at the time, Mr. Henry G. Harmon, and provides a look at life on campus, described as an “85-acre campus adjoining the northern edge of Fulton that combines architectural and natural beauty to a rare degree,” with “fine old trees, lakes and bluegrass turf forming a setting with all the character and charm of a country estate.” The publications highlight both the academic and social experiences of attending The Woods (“A Junior College for Women”) in the mid-1920s, including life in residence halls, horseback riding, Sunday afternoon tea, evening dinner in the dining hall, plays, and music recitals, and formal dances. Images abound of campus staples that are still with us in 2020 (the Academic Building, Woods and Senior Lakes, Jones Hall) and others that are not (Jameson Conservatory of Music, McBride Gymnasium, the Natatorium). There is also a hand-sized program for a junior dance held on May 15, 1926, with a place to list the names of everyone you danced with during the evening.

Lorene Meyer was right in the middle of the busy swirl of activities that represented commencement week for William Woods graduates during May of 1926. She took her education and went out into the world, but it is not known if she ever returned to her alma mater.

“After graduation, she taught at the Oklahoma School for the Deaf,” Rosenberg said. “At some point, she moved to Los Angeles where she had old friends from St. Louis. There, she met and married my father in the mid-1930’s and they had my older brother and me. She did return to St. Louis once, to visit, accompanied by her mother.”

In later life, Ms. Meyer taught and worked with special needs children. She also enjoyed arts and crafts projects, while participating in her Synagogue’s activities. She passed away in San Pedro, California, in 1974.

It is highly probable that Lorene Meyer experienced the excitement of college graduation, and the anticipation of a whole life of possibilities laid out in front of her, during that long-ago spring time of 1926 at William Woods. But she also probably could not have possibly fathomed that a few souvenirs of some of her life’s more joyous moments would one day be examined with fascination by individuals at what is now William Woods University, nearly a century later.

During this 150th anniversary year of the founding of The Woods, Lorene Meyer’s story reminds us that, though our own individual existence might be but a moment in time, sometimes we forget that our very being has significance. To the people we befriended, loved or knew during our time on earth. Or even sometimes, to the people who do not come along until generations later.