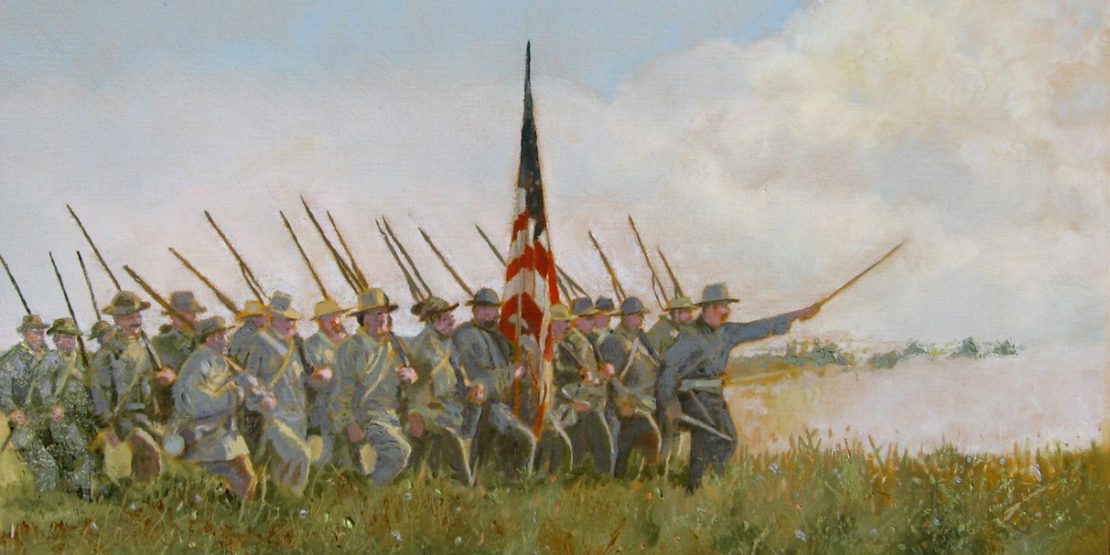 William Woods University has continued to evolve since its establishment in 1870, but the school that now offers doctoral degrees started as a school for orphans of the Civil War. The first major Civil War battle west of the Mississippi River was on Aug. 10, 1861, at Wilson’s Creek, Mo. “The Charge” at Wilson Creek is one of approximately 60 paintings and sketches by Dan Woodward that will be

featured in WWU’s Mildred M. Cox Gallery Aug. 18 to Sept. 25. An opening reception will be held from 4:30 to 6 p.m. Aug. 18.  A closing reception, from 4:30 to 6 p.m. Sept. 25, will feature a gallery talk by the artist. Woodward, an American artist based in Rolla, Mo., created “Impressions of the Civil War in Missouri.” He paints primarily in oils and focuses on creating original art with historical themes. His paintings can be seen in public and private collections in the U.S. and abroad.

A graduate of California State University-Los Angeles, he has studied, taught and painted in Southern California, Mexico, Europe, Africa, the Orient and the Middle East. In Rolla, he organized Local Color, a group of artists painting together outdoors. He also is one of the co-founders of ArtsRolla, a community arts

council. Woodward also has been active with the St. Louis Artists’ Guild, exhibiting for many years and serving on the board of governors. His exhibit follows events that occurred in the years of the Civil War in Missouri and neighboring Kansas, Arkansas and Oklahoma. Actual locations and scenes were adhered to as a faithfully as possible, including several reenactments of battle and camp life.

“As a Missouri native, I take pleasure in recording the quickly vanishing world of natural wilderness and historical identity that surrounds us in our unique part of the country, and feel strongly that artists have a responsibility to keep the past alive by preserving the important memories and icons of civilization,” Woodward said. “The challenge of art, whether it be painting, writing or making music, is to enliven those images and perhaps inspire others to envision their own important links with history.” With the help of Civil War reenactors, Will Tollerton of Nevada, Mo.; John Peterson and Terry

Stephen Schrock, Don Wilson of Rolla and Omar Reed of Muskogee, Okla., portrayed soldiers and bushwhackers in several of the paintings. In his paintings of the home front, Libby Sanders, Delores Wood, Loretta McClure and Collin Heavin of Salem, Mo., portrayed characters. The Mildred M. Cox Gallery is open 9 a.m.-6 p.m. Monday-Friday and 1-4 p.m. Saturday and Sunday. Admission is free.