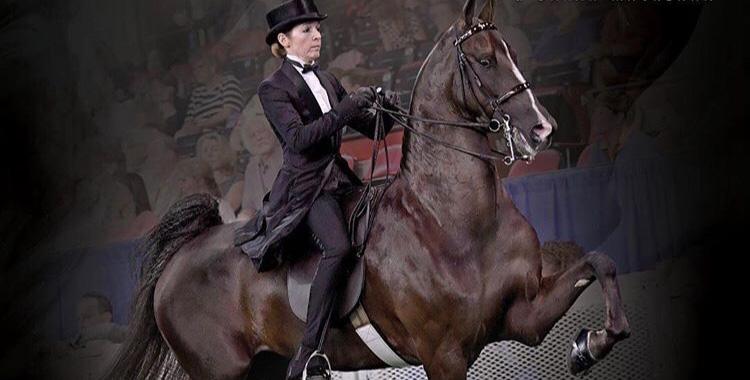 Sometimes, an investment can pay off in surprising ways. Such was the case with Theresa Vonderschmitt, member of the William Woods University Board of Trustees.

Before joining the board in 2004, Vonderschmitt began learning to ride Saddle Seat horsesfrom a WWU graduate, Renee Biggins ’83. From there, she was introduced to emeritus Professor Gayle Lampe and was invited to both see the equestrian facilities and ride at William Woods. Lampe also provided multiple horses for Vonderschmitt to ride and introduced her to the rest of the equestrian faculty.

“I felt like it was important for trainers to get a solid education,” said Vonderschmitt about her response to the experience. “Education is expensive today and I have provided different scholarships in the past, so I decided to expand into providing scholarships for the Saddlebred industry.”

Vonderschmitt thus began funding scholarships to WWU students in 2001. One of the first students to receive the scholarship was Sarah MacKenna ’09. MacKenna was originally going to attend a local state university due to cost, but the Vonderschmitt Scholarship gave her the opportunity to come to WWU and pursue her passion in the equestrian industry. Which led to Vonderschmitt’s original investment in a scholarship paying off directly – for her!

“Here it is, about 15 years later, and you have someone like Sarah who graduated with the scholarship who is now training my horses,” said Vonderschmitt. “It’s a very special relationship.”

MacKenna began training Vonderschmitt’s horses at Monnington Farm in Simpsonville, Kentucky two years ago. It began when Vonderschmitt sent a difficult mare she had no luck training with other trainers to MacKenna. When MacKenna successfully began showing the mare, Vonderschmitt sent her more horses to work with. MacKenna also helped train Vondeschmitt’s assistant, Lizelle Hill, to show competitively, and now helps Vonderschmitt compete at a variety of shows throughout the year.

And with that, a relationship that began with a generous academic scholarship has come full circle.

“I am so grateful for the chance to work with Theresa and her horses,” said MacKenna.

“She first asked me about taking a young mare a few years ago that needed a change of scenery and see what I could do with her. We ended up making numerous victory passes that year and the next year Lizelle went on to successfully show the mare. Now, not only do I get to work with these amazing horses, but I get to work with Theresa and be a part of her show career too,” she said.

“I don’t think I would have made horse training a career if it wasn’t for Theresa and her generosity with her scholarship at William Woods,” added MacKenna. “To say she has been a major part of my career would be quite an understatement.”

Vonderschmitt is impressed with Mackenna’s talent in not only training a horse, but in transferring that training to the rider and helping the horse and rider come together as a pair. And it goes without saying that she was happy to work with a WWU graduate, considering her feelings about the school and program.

“I’m very proud of Sarah, it’s a nice reward that I get to experience by working with her,” said Vonderschmitt.

An experience that began back in 2005, when MacKenna received the financial boost she needed to attend The Woods from a new scholarship, opening the door to her new career path.

“I loved the variety of learning opportunities that William Woods provided,”said MacKenna. “I was able to learn about so many aspects of the horse industry, workingwith photographers, show managers, veterinarians, and a number of highly respected horse trainers.  The other great benefit of William Woods is the number of different horses I was able to ride and work with, they were some of the best teachers,” she said.

“I had a great experience at William Woods and am so grateful for the opportunity.”