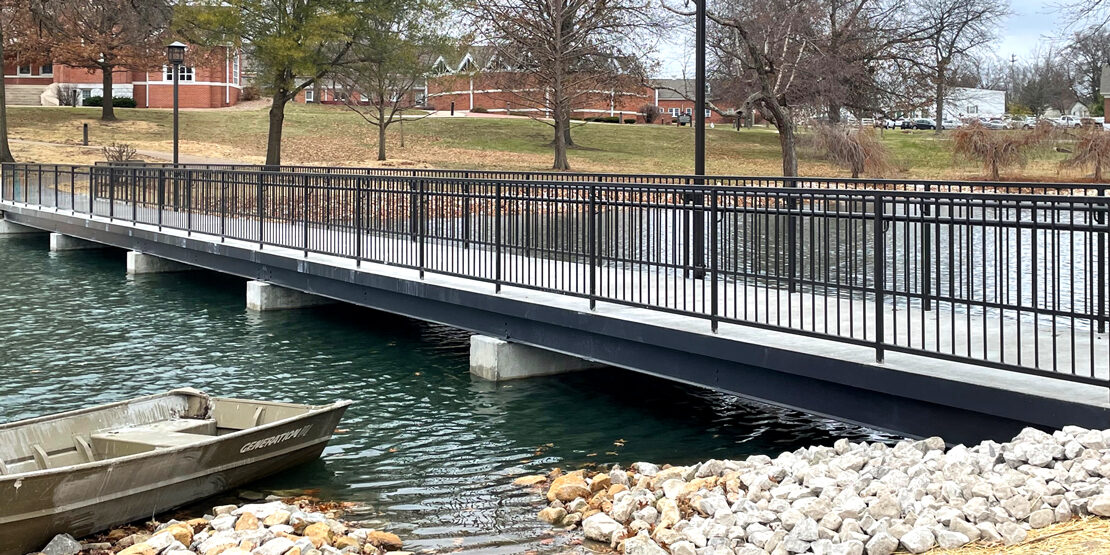 Few years in recent William Woods memory have seen the establishment of as many new campus landmarks as in 2022. And now, the most prominent project of them all – the rebuilding of the famous bridge across Senior Lake – is now complete.

This week the newly rebuilt bridge, which has yet to be formally named, was re-opened to pedestrian traffic once again after a major renovation that entailed a new concrete walkway, steel girders, steel handrails and ornamental lighting. It was the first renovation to the bridge, originally built in 1948 and the storied home of the University’s Ivy Ceremony, in 53 years.

“Senior Lake Bridge is perhaps the single most iconic structure on out beautiful campus,” said President Jeremy Moreland. “But while we have always revered the bridge and its glorious past, it was also important that we took all necessary steps to ensure it has a long future. And now, I am happy to say that we have.”

For a number of years, the bridge had been increasingly showing its age. Deterioration of the concrete beams and walkway, and sagging brick façade rails that were causing electrical safety concerns, created a potentially hazardous situation for the campus community and visitors. Continuing to honor the bridge’s hallowed place in WWU history while subjecting the structure to additional use each year – without some major renovation work to keep it updated and safe – simply became, well, a bridge too far.

So thanks to a generous donation from Virginia (Piggie) Herndon ’47, a Fulton resident who included the project as a gift to the University in her estate when she passed away on July 12, 2021, the old bridge started coming down shortly after the Ivy Ceremony this past August.

Working closely with the University’s long-time contractor, S & A Equipment Builders of Fulton, the WWU maintenance team embarked on the work detail that included removal of all concrete beams, the walkway surface, brick rails and bridge lighting. Utilizing only the original concrete piers, the team formed in place new intermittent pier caps to accept new steel girders, and then poured in place new steel handrails to match the existing rails found around McNutt Campus Center and Sorority Circle. They also incorporated two ornamental lights on the new structure to match the existing ornamental lights on campus walkways.

The result is a new look that will immediately resume its status as one of the famed symbols of the William Woods campus, with greater convenience and safety for all who journey across.

“The new walkway across the bridge is almost twice as wide as the old bridge, and it will be easier to maintain in inclement weather,” said Mike Dillon, Director of the Physical Plant at WWU. “It will overall be a much safer environment for students, faculty, staff and visitors to campus, which is our biggest priority.” The new Senior Lake Bridge, therefore, is now literally a bridge to William Woods’ future. But it is not alone in that distinction. Instead, the new structure joined the nearby W-W-U letters statue, the Screech Walking Trail around Junior Lake, and the “GO OWLS” mural along the side of the Helen Stephens Sports Complex, as new campus landmarks established in 2022 that helped signal a new era at The Woods.