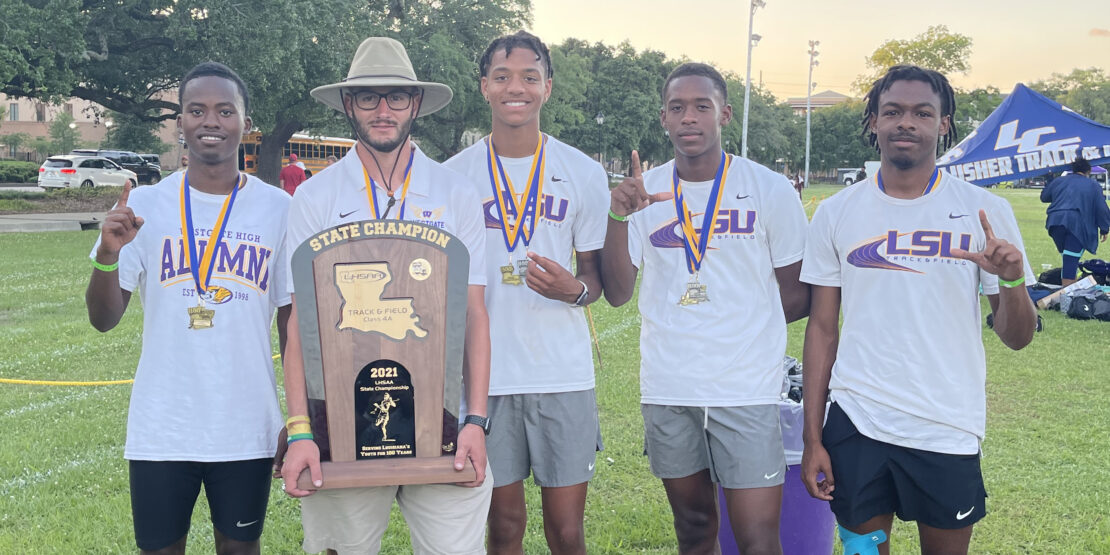 If there was an appropriate metaphor for Philip Guidry’s life, it would have to be a long distance run.

The former William Woods University (WWU) cross country and track standout, still a young man in his early 30’s, may still have many more miles to go in his life’s journey. But he is also fortunate enough to have already achieved professional excellence at a young age.

A 2010 Exercise Science degree graduate from WWU, Guidry is the Head Cross Country and Track and Field Coach at Westgate High School in New Iberia, Louisiana. On May 8, 2021, he realized a professional dream when his student-athletes won the Louisiana High School Athletic Association (LHSAA) Class 4A State Title, just one year after his heavily-favored 2020 team was denied a chance to compete due to COVID-19.

It is said that every journey begins with a single step, and with his first state championship as a head coach, Guidry has already taken a big one towards his own professional pinnacle.

“Ten years from now, I can see myself still teaching and coaching at Westgate High School,” Guidry said. “I would like to have won many more state track and field championships and have coached national championship teams by then. I plan on building the program to become one that is nationally respected, with my ultimate goal to have as many student-athletes as possible go onto the next level to compete in college track and field and cross country.”

And if anyone knows what it takes to compete and excel at track and field and cross country at the intercollegiate level, it’s the former Owl who once took a chance on The Woods -and won big.

A runner takes a leap – of faith

In 2007, Philip Guidry was looking for a change of scenery. As a sophomore and member of the track team at the University of Louisiana-Lafayette, a teammate told him about a recruiting visit he had taken to a small college in Fulton, Missouri. The smaller school with the solid track program intrigued Guidry, as did the Owls’ dynamic head track coach, Jamie Moreno, who convinced him to choose WWU. So Guidry did something some would consider risky when he decided to transfer to William Woods, sight unseen.

“I never actually visited the campus – my friend described it and told me about the coach, and I became sold on transferring to William Woods,” he remembered. “I came without knowing anything about the campus or school, but it became a very special place to me through the experiences I had as a student-athlete.”

Any homesickness he felt or doubts he might have had about his decision melted away quickly, as Guidry bonded with his WWU teammates during long training runs. They pushed each other to excel during tough workouts, and together won the American Midwest Conference Cross Country Championship in 2007. Guidry excelled individually as well, qualifying three times for national championships in cross country (2008) and outdoor track (2009, 2010). His athletic memories at The Woods, and the lifelong friends he made in teammates Brent Almand, Levi Bates, Lucas Breneman, Daniel Gale, Andy Harmon, Keith Jennings, Pat McPhail, Justin Simms, Emmanuel Ramirez, Michael Nedeau and Anthony Stockton, are things he cherishes.

“As a student-athlete at William Woods, I was able to begin to find my identity as an individual,” Guidry said. “My coaches and teammates challenged me daily to be the best I could be. The team was very close and we still keep tabs on each other on where life has taken us.”

Guidry’s personal awakening extended beyond athletics during his time at WWU, including having faculty like Marshall and Cindy Robb, Dr. Ed Easterling, Dr. Linda Duke and David Forster who challenged him daily in his courses and taught him ‘a great deal about the world.’ He also learned many life lessons while working as a student worker in the WWU Athletic Department under athletic directors Debbie Wolfmeier and Larry York, and then-sports information director Jason Vittone.

When it was time for Guidry to leave William Woods, which he did in 2010 with a degree in Exercise Science and minor in Business Administration, he was trained and ready to enter into his most important competition – the real world.

“William Woods prepared me for my career as a teacher and coach in many ways,” he said. “I had great leaders molding me daily, teaching me valuable life lessons and how to overcome adversity. For example, the Champions of Character program through the National Association of Intercollegiate Athletics (NAIA), that Mr. York was big on, was so important and helped me grow into the man I am today. I will never forget where I was first taught the meaning of integrity, respect, responsibility, servant leadership and sportsmanship.”

Running down a dream

Following graduation from The Woods, it didn’t take Guidry long to realize what he was passionate about in terms of a career. After dabbling in running a fitness club and even oilfield sales, he reached out to his old high school (Comeaux High School in Lafayette) to inquire about assisting with the team’s cross country and track and field programs. He spent a year doing so while he gained his teaching certification and worked odd jobs to support himself, and eventually was hired at his alma mater in a full-time capacity, teaching and coaching. In 2014 he was hired as an assistant cross country and track coach at Westgate High School, and was on the staff when the school won the LHSAA 4A State Outdoor Track and Field Championship in 2015. Three years later, he was named head coach of the powerful program.

Today, Guidry serves as Quest For Success, Cyber Society and Physical Education teacher at Westgate, preparing lessons that engage and challenge students intellectually so that they are ready to be the leaders of tomorrow. On the coaching side, he runs the full day-to-day operations of the school’s track and field program, including the eligibility of student-athletes, fundraising, and coaching the cross country and boys’ track and field teams.

“I love getting to impact my students’ lives daily,” Guidry said. “My high school coach Tom Nolan impacted my life in a tremendous way and I just try to do the same for my students and athletes on a daily basis. I enjoy watching a student grow in the classroom and grasp concepts that they were not able to at one point and become leaders among their peers. As for coaching, I love feeling like I am the most prepared coach to lead my team to be successful. Coaching is a mental grind and it takes countless hours to prepare to lead them into competition. When I work with my staff to build champions for life, that is what is most rewarding.”

Guidry’s biggest goal is to look for opportunities for his student-athletes to grow, just as his teachers and coaches did for him over a decade ago at William Woods. Whether those opportunities include overcoming adversity when his highly talented 2020 track and field team was denied a chance to compete for a state title due to COVID-19, or just from taking advantage of chances to learn from other successful individuals.

“Seek learning opportunities from others who are successful, and attend professional development training when you are able to,” he advises today’s students who yearn for a career teaching and coaching. “Do not be afraid to ask questions to other great coaches, because they themselves became great by asking other great coaches questions.”

Philip Guidry is living proof of what success looks like in his chosen profession. He has passion for what he does. He has sacrificed who he is to become who he wants to become. And he knows that pain is temporary and will eventually subside, but quitting is a pain that will last forever.

The young man who once took a big chance on William Woods might be a long way from life’s finish line, but there is no doubt that he is already a winner.