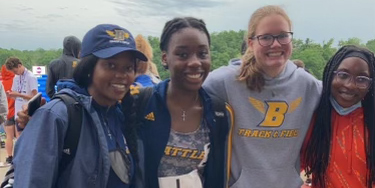 One of the areas where William Woods University has made its mark is in the University’s long-time appeal to so-called “non-traditional” students. That is, students that are anything other than traditional, living on-campus undergraduates.

Ciara Tatum ’19, a physical education teacher at Lange Middle School and Track and Field Head Sprint Coach at Battle High School, both located in Columbia, Missouri, checks the box for many of the characteristics of a non-traditional student. She originally came to William Woods as a transfer student. She completed her degree at WWU as a working professional and mom. She was a commuter. And she was a determined individual who never wavered from her goal of finishing her degree, despite a gap of 11 years from when she first entered The Woods in 2008 as a student-athlete, and earning her Bachelor of Science in Physical Education K-12 and certification to teach in the fall of 2019.

“I honestly never had time to relax,” Tatum recalled about her time at WWU. “I juggled class, being a two-sport athlete, teaching, coaching, being a full-time mom, social life and spending time with my family, while constantly using my time management skills in my planner. It was overwhelming at times because the expectations of me were high in every category and if I ever wanted to give myself some grace and miss something I felt like I would be letting someone down. So I did the best I could each day to give 100% of myself until I met my goals.”

Ciara Tatum has already mastered a few of the most intangibles for success such as determination, giving 100%, achieving goals. She has more than a few valuable life lessons to teach the students and athletes she interacts with each day.

“What I love most about teaching and coaching is how rewarding the feeling of just being there for my students is, especially when they tell me about something that I did for them or told them that they have never let go and are still holding on to that I may have completely forgot,” she said. “That feeling is just priceless!”

Turns out that Ciara Tatum, despite a few deviations from her original path, is right where she needs to be.

A degree of difficulty

Tatum arrived at William Woods in the fall of 2008 as a transfer from Kansas City (Kan.) Community College, a two-sport athlete in basketball and track and field. Her college years at The Woods would be different from most undergraduate student athletes, after her son Elijah was born in 2007. By the end of 2012 she had everything in place to obtain her Bachelor’s degree except her student teaching and certification, which was put on hold as she raised her son.

She was able to finally return to WWU in the fall of 2017 when her son was in 4th grade, but then had to postpone again for another year when she landed a Permanent Substitute teaching position with Columbia Public Schools. The new position, along with taking care of her household, necessitated a delay until the fall of 2018 for her to resume at William Woods.

But failing to complete her degree was never an option, despite all of life’s responsibilities now on her plate. And William Woods was once again there to do one of the things it does best – support the so-called non-traditional student.

“William Woods made sure the Dome (McNutt Campus Center) was open 24 hours for all, so that commuter students always had access for whenever they needed to stay on campus late and the library was closed,” Tatum said. “They maintained commuter parking areas that helped ensure that there was always parking when campus was packed.”

“Most importantly,” she continued, “was how easy it was communicating with professors. They all knew that you were a commuter student and working professional so that when you had other obligations at times the teachers were very understanding and a bit flexible in allowing you a grace period to make up work if you needed to miss a day.”

In the fall of 2019, Tatum had achieved her goal – graduating with her Bachelor’s in Physical Education K-12 degree from The Woods.

“WWU overly prepared me for my career,” she said. “I learned things that others are hearing for the first time. I was taught not only the psychology of education but also all those little things with how to control your classroom, build relationships, and create a safe place where learning is fun, creative and cool.”

Tatum spends her days these days doing what she was meant to do – teaching and coaching, and shaping the lives of her students and athletes. A Physical Education teacher at Lange Middle School, and Track and Field Head Sprint Coach at Battle High School, her enthusiasm and love for what she does is obvious.

“I love coaching, and as I see it, coaching is teaching and teaching is coaching,” she said. “I love the relationships built, and the mentorship piece since it is an extracurricular activity for students so I get to see them in another light outside the classroom in their own element. It is such a beautiful thing to witness young people go for things they may doubt but grow in confidence and then reach out to tell me that my motivating words, wisdom and encouragement inspired them to be a better version of themselves.”

That commitment to the young people that she influences every day extends to her favorite young man, her son Elijah.

“As a teacher, we learn more than most that everything must start at home,” she said. “After my long journey of chasing my career down and never giving up in everything outside my home, I have realized that I want to be there for my son more than anything. Being the best ‘home school’ teacher to my own children is at the very top of my list as a dream job!”

We should all be so lucky to have encountered someone like Ciara Tatum during our own educational journey in life, for she has much to tell us. And much we can all learn.

“Teachers are positive role models so know someone is always watching you, looking up to you, and being motivated by you,” she said. “Just because someone is a teacher doesn’t mean they are no longer a learner. We should all be willing to learn from everyone, young and old, and from any and all experiences so that we can grow.”