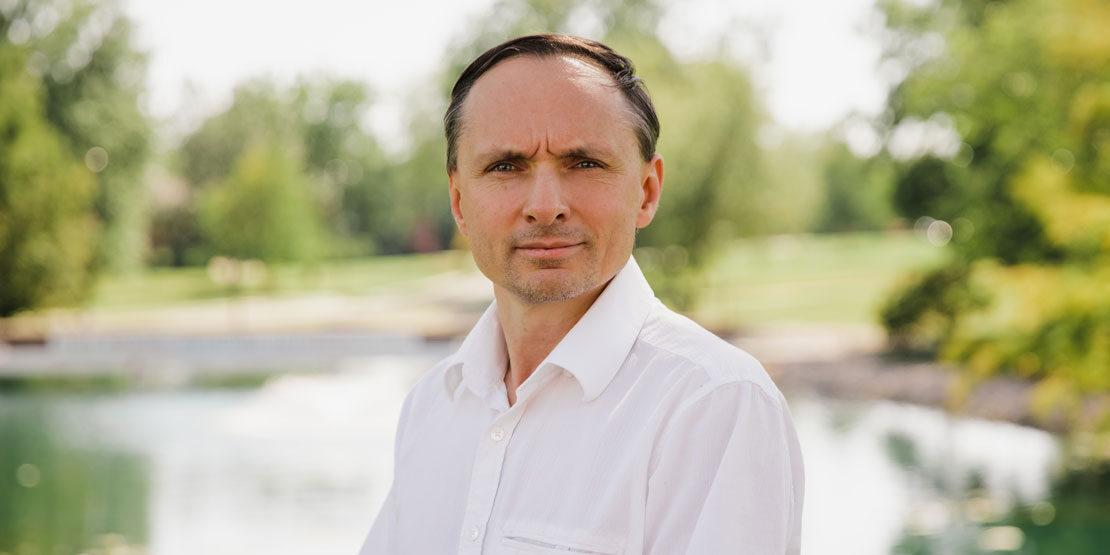 If you want to meet with Roman Sivkov away from campus sometime, you might consider reserving a table for two.

As in table tennis, that is.

An instructor of Finance in his first year at William Woods, Mr. Sivkov devotes a significant amount of time to his favorite hobby when not teaching – table tennis – and is clearly more involved than your average ping-pong participant.

Mr. Sivkov has played the game at a very high level collegiately in his career, has helped coach and now enjoys a prominent position in the National Collegiate Table Tennis Association (NCTTA), serving as Lower Midwest Region Director.

“I love table tennis, because it is very enjoyable to play and it exercises all the muscles in the body, which is great for one’s health,” he said.

Roman began playing the game as a teenage in his native Russia, but mostly just for fun. Then in 1994, he arrived in the United States as a one-year exchange student at the University of Missouri (Columbia), later continuing his education at Southern Illinois University in Edwardsville, Illinois. It was here, in America, that his table tennis game really took off.

While teaching at Lindenwood University in St. Charles, Missouri, Mr. Sivkov served as a volunteer assistant coach and helped the team’s head coach conduct training sessions and attended tournaments with the team for several years. He even began competing himself, playing in singles events in different ratings categories (mostly under 2000, 2100 and 2200) and even took first place in a couple of them.

He had made himself into a solid player while studying the game, and helping coach others.

“The biggest challenge in coaching is showing a player the way to win a match by exploiting their opponent’s weakness during a situation when the opponent currently has an advantage,” Roman strategically remarked.

Mr. Sivkov teaching career has included stops at Southwestern Illinois College, St. Louis Community College, St. Charles Community College, Lewis and Clark Community College, and McKendree and Lindenwood Universities before coming to William Woods. His devotion to teaching hasn’t left him with as much time as he would have liked to continue playing table tennis competitively (“my goal is to resume training again and restore my skills to the level I had just five years ago, when my rating was over 2000 points”), but his new administrative role with NCCTA has kept him close to the game.

“Serving as NCTTA Lower Midwest Region Director mostly involves organizing table tennis tournaments among a number of area schools, such as Washington University, the University of Illinois-Champaign, Illinois State University, St. Louis University and a few others,” he said.

In the legendary 1990’s blockbuster film Forrest Gump, table tennis took the lead character played by Tom Hanks literally around the world. For Roman Sivkov, the game also came with him from the other side of the world – and remains in his blood at William Woods.

William Woods University6 days ago
What a great night in St. Louis! Thank you to all our alumni who joined President Moreland and the WWU Advancement Team at Brio for our Alumni and Friends Gathering, the first of our Summer Tour! It was great to reconnect, and we cannot wait to see you again soon!!
#MorelandSummerTour